Based on an eponymous play by Oldřich Daňek, the film version was brought to the screen in 1986 as the final film from experienced director Jiří Sequens. This musical comedy set in the 14th century, during the reign of King Wenceslaus IV of Bohemia, has a trio of mercenaries as its main characters. Hřbet, Zajíc and Svatý are returning to Bohemia from Aquitania in order to join up with local forces there. During their trip through the Czech countryside, our heroes frequently get mixed up with the wrong side, and consequently repeatedly find themselves on the receiving end of a good thrashing. Yet, in all these battles and scuffles, they retain the moral high ground. The trio are played by actors Jaromír Hanzlík, Svatopluk Skopal and Radoslav Brzobohatý. The roles of the villainous noblemen, with whom the trio become entangled, are played by Josef Vinklář and Jan Čenský. The historical backdrop is enriched via the songs of Vítězslav Hádl, with lyrics by Vladimír Sís, reflecting the contemporary Czech fad for electronic music.

It is the 14th century. Three mercenaries wander through the country. Two of them, nicknamed Chine and Rabbit, travel on horseback, the poorest of them, called Saint, on a donkey called Moses. Chine finds a skeleton of a hand and a bracelet with precious stones in it in a brook. In a roadhouse, the deaf-and-dumb fool Dog's Foot reports to the publican and his pretty wife Perchta by movements of his agile body that guests are coming. The orphaned girl Bezka also works in the boozer. Her father was murdered years ago by the elusive Band of the Cross which marks its victims – rich merchants – with a cross on their foreheads. While Rabbit cannot resist Perchta's seduction, Saint loses all their property and the donkey in a dice game. But Chine bets the bracelet and they get everything back. The wealthy feudal lord Mátoha of Prám hires the threesome to bring him back his daughter Běta, who was kidnapped by the young Chval of Drslavice. The mercenaries get to the kidnapper by a trick, capture him and transport him to the fortress of Prám. But Mátoha is somewhat unwilling to pay them for their service. Běta, who wants to marry Chval, comes in soon, wearing an earring in her ear which matches the bracelet. She starts to quarrel with her father and, outraged, labels him a chief of highwaymen. But Chval teams up with Mátoha, and Dog's Foot lures the two mercenaries out to the rocks to the bodies of several massacred Arabian merchants. People call for the village magistrate who proclaims the soldiers to be robbers and arrests them. The royal district administrator sentences them to be hanged. The people behind the Band of the Cross, however, are in fact Chval, Mátoha and the magistrate. The girl Bezka bribes Dog's Foot by making love to him and gets to the cell. She has grasped who actually killed her father and helps the convicts escape. Instead of the plundering predatory noblemen their faithful innocent servants are hung with sacks on their heads. The disappointed fool Dog's Foot sets Mátoha's fortress Prám on fire out of revenge. The mercenaries, who now all leave on horseback, take Bezka with them. Now, it is the girl who is on the donkey. 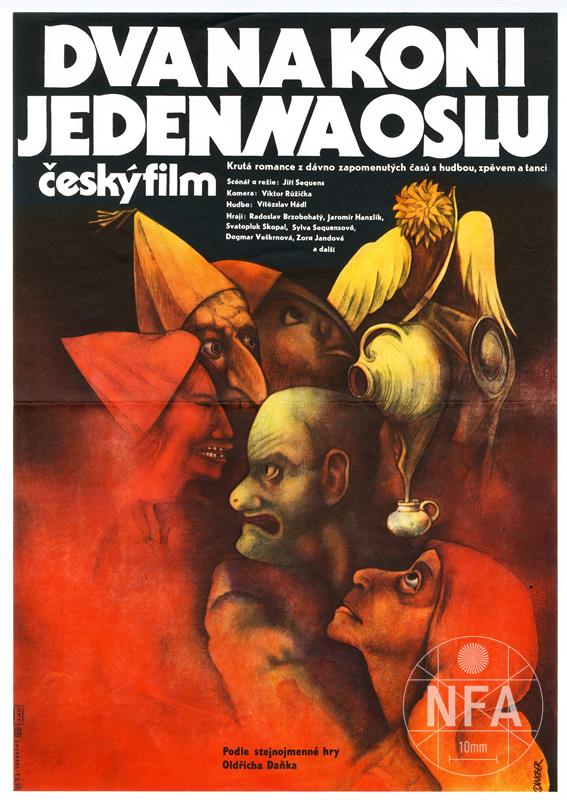 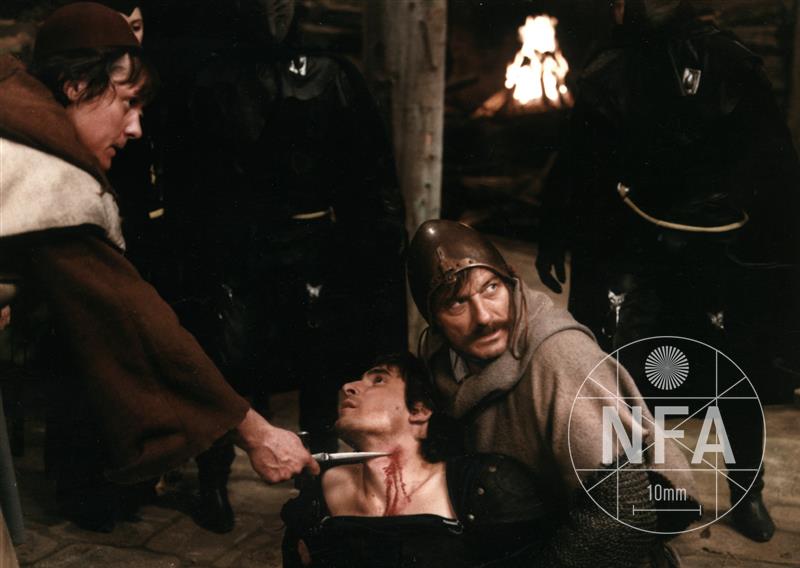 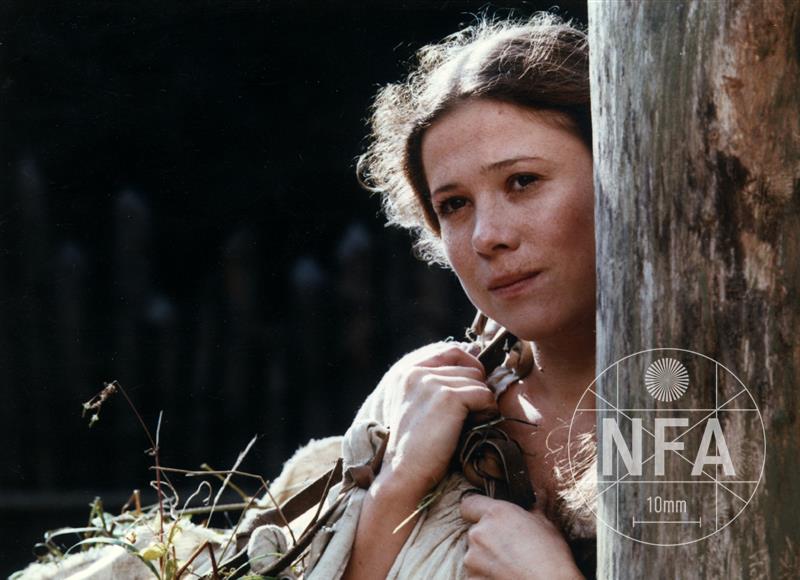 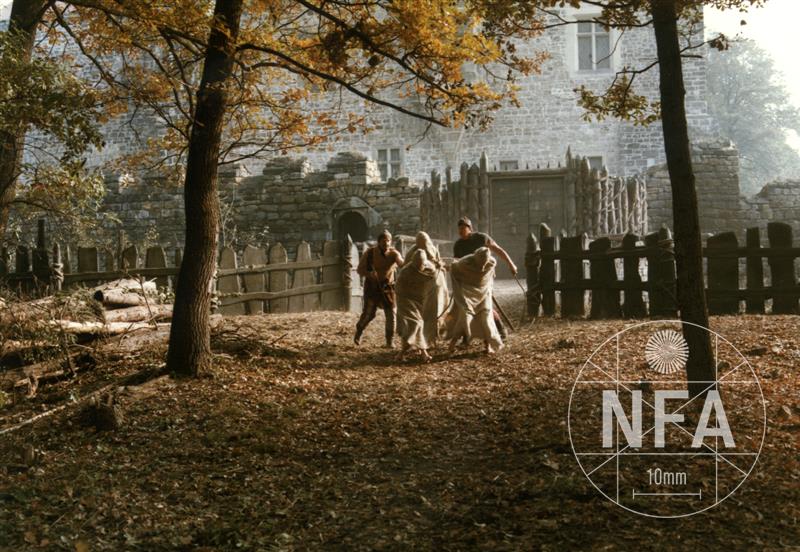 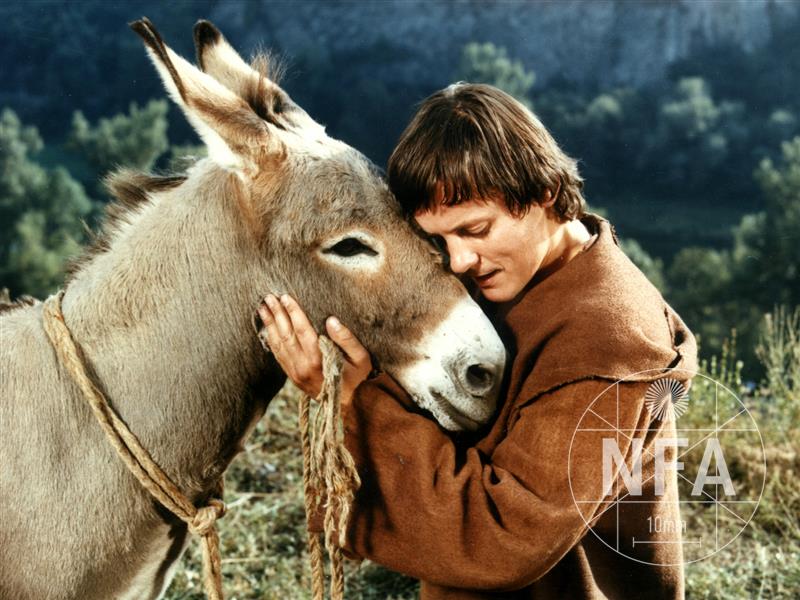