‘We were in the fourth year, Věra had just finished Ceiling (Strop, 1961), Evald Tourist (Turista, 1961) and Honza Black-and-White Sylva (Černobílá Sylva, 1961). When I saw the films one after the other, I was overwhelmed with astonishment resembling blindness caused by a sudden burst of light […] Because when the projector lit up, I knew that Ceiling and Tourist were films inseparable from Věra and Evald, whereas Black-and-White Sylva was what would be called a film made by FAMU graduates…’[1]

It was with this characteristic act of flagellantism that Pavel Juráček in 1969 delivered his opinion on one of his student works, a mid-length satire about a young Stakhanovite starring in a schematic agitational comedy who suddenly materialises in the real world of Prague of 1961.

After The Guard of Dynamite (Hlídač dynamitu, 1963), Black-and-White Sylva, directed by Jan Schmidt, was Juráček’s second screenplay filmed during his dramaturgy studies at FAMU. In hindsight, Juráček regretted that his screenplay didn’t reflect his own hopes, fears and dreams. He described the plot as tortuous and shallow. Jan Schmidt also had a reason to be displeased, as he originally wanted to film a production-wise incomparably more demanding dystopia titled Late August at the Hotel Ozone (Konec srpna v hotelu Ozon, 1966). As students, they submitted the story already in 1960, but the school wouldn’t greenlight such a big project, so Juráček ended up writing a satire. Despite the discontentment of both authors, Jan Žalman included Black-and-White Sylva among student films ushering in the new era of Czechoslovak film[2], and also Petr Szczepanik stresses its historical importance, writing about ‘probably the first expression of critical reflection of the Stalinist era production culture.’[3]

In his book The Barrandov Film Factory (Továrna Barandov), Szczepanik mentions the film in the context of Czech film parodies whose number, he argues, increased significantly after the mid-1960s. Most of them made fun of Western genre conventions. According to the Czech film scholar, Sylva, which ridicules Czech cultural traditions, is an exception, along with The Poacher’s Foster Daughter (Pytlákova schovanka, 1949) and the Normalization-era films by Ladislav Smoljak and Zdeněk Svěrák.

The conventions that Juráček and Schmidt ridicule are briefly introduced to us in the first minutes of Black-and-White Sylva, taking place in the world of a non-existent film Love Between Panels (Láska mezi panely). When laying bricks, the construction worker Sylva boosts her morale with a song about a house with a soul. But then an accident happens, and the protagonist of the earthy comedy finds herself in a screening hall among snoozing cinemagoers. Confused, Sylva runs out of the cinema and starts looking for accountable people who could return her to her film. Or at least get her a construction job. But the employees of Czechoslovak Film at first hide their heads in the sand. She is labelled a surpassed creative error by a dramaturge, and not even the film’s director and screenwriter claim responsibility for her.

The circumstances have changed and theatrical phrases about panels and concrete mixers are no longer in fashion. It was necessary to adapt to new ideological requirements. While the director and the screenwriter argue who is Sylva’s ‘father,’ the unfortunate girl without a surname, identity card or purpose is taken on by a DAMU student. First, he teaches her how to walk properly, then shows her Prague and showcases her as an exotic object from a different world to his fellow students. They reach a pragmatic conclusion that they should write a paper titled ‘The Matter of Genuineness of Film Characters.’

Another student comes up with a much more shocking idea, which is nevertheless presented as a joke: ‘She is a materialised thought, and if you violate a thought, it ceases to exist. So, therefore she could physically cease to exist if we violate her.’

The proposition is not accepted. Just like the following proposition to test Sylva’s mortality by throwing her off a roof. The titular hero eventually becomes ‘merely’ a victim of crude jokes and stares from a group of young men who rationalise their non-empathic objectifying behaviour by telling themselves that the film protagonist is a work of art, not a human being.

Pavel Juráček was similarly contemptuous not just when writing about women, but according to Daňa Horáková and her book O Pavlovi, he treated them in the same manner. So, it’s not true that he didn’t imprint his personality into Sylva as he regretted in the abovementioned quotation.

Even though the young woman remains a one-dimensional caricature, she is also the only character you can identify with. The pragmatic actions of the representatives of Czechoslovak Film and students (exclusively men), who are only trying to think of ways to exploit Sylva, are more repulsive than the outdated ideals of an avid Communist.

The film doesn’t show 1960s Czechoslovakia as socially and culturally more mature than in the preceding decade. One set of illusions, myths and prejudices was actually replaced by another. If Sylva could work at a construction site in the 1950s without anybody giving it a second thought, in 1961 the foreman rejects her. He simply doesn’t believe that a woman can be a skilled bricklayer.

If one of the students says that they will teach the lost film protagonist ‘to be normal,’ he apparently doesn’t realise that normality is merely a period-conditioned social construct and a few years later people will be used to something entirely different. Just like social realism in art was pushed aside by other stylistic principles.

In addition to a clash of two genders and two ideologies, the dramaturgically and tonally disjointed film explores another conflict – authorial. The screenwriter proclaims himself the sovereign author of Love Between Panels, but so does the director, who only thanks to the unexpected visitor learns that the original screenplay was different, and that its author had to humbly accept radical changes.

The clash of both professions was another dominant motive in Juráček’s personal texts. He naturally took the side of the screenwriters whose work, he thought, was defiled by arrogant directors. Black-and-White Sylva’s finale admits that the spiritual father of a film is its director who is, however, punished for it – he becomes a part of what he created.

Young artists may laugh maliciously at the expense of the meritorious comrade, but if the future of art is to be rooted in the values they personify in the film, the ending of Juráček and Schmidt’s generational manifest brings about a dismal feeling rather than relief. 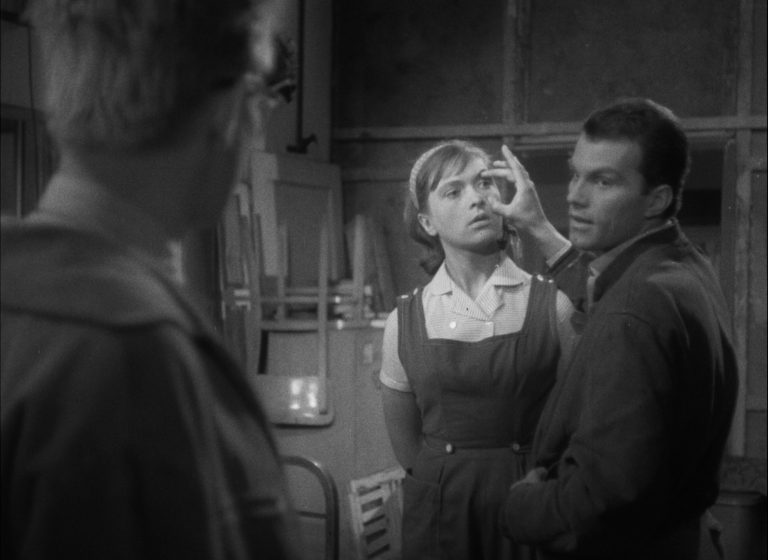