Daria Kashcheeva: My ambition was to make a professional film

Daria Kashcheeva studied musical direction at the Gnessin Russian Academy of Music in Moscow. During her studies at the Film and TV School of the Academy of Performing Arts in Prague (FAMU), she made the short films Before the Wind (Vítr správným směrem, 2016), In a Dumpster (V popelnici, 2017) and The Oasis (Oása, 2017). Her film To Accept (2017) won the Nespresso Talents contest at the Cannes Film Festival. Her bachelor graduate puppet film Daughter (Dcera, 2019) won many international awards such as the Cristal for the Best Student Film in Annecy, the Short Film Jury Award for Animation at the Sundance Film Festival and the Student Academy Award for Best Animated Film. The film will be screened on 17th February in the Ponrepo Cinema within the Parallel Cinema programme.

In Daughter, you used a hand-held camera that gives the animated film a very specific expressivity. Where did the idea come from?

At the 2017 Karlovy Vary IFF, I saw a very boring film with an excellent cinematography. And as I was bored at the screening and couldn’t leave, I was going over my latest script in my mind. And the idea to use a hand-held camera to observe the story of the characters was born. I immediately thought of the Dogme 95 movement and films by the Dardenne brothers in which the moving camera works very well in dramatic and often intimate scenes. My film is a story about the relationship between a father and his daughter and that is in a sense a small and intimate world. So, I had all these ideas during the screening, and I got really excited about it, but I didn’t know how to do it when I left the cinema. But because I was really inspired by it all, I turned to my pedagogues for advice. And it was Michael Carrington, the head consultant of my film, who helped me the most. He is actually an animator. We started coming up with ideas together, but we didn’t know if it was possible as no one had ever tried this method before. I thought that maybe someone tried it and it just didn’t work. So I had to do a lot of testing and that helped me. I tested the technique before I started to work on the film.

You just confirmed my theory that even boring films can be inspirational because when you are bored, you’re looking for ways to pass time and actually let your imagination run wild.

That’s true. It has happened to me several times. But even in boring films, you can still find some stimuli that inspire your thoughts. So it does work very well for me.

You mentioned that a hand-held camera works well with a certain type of story or specific storytelling method. What does it evoke to you? That the camera observes a situation or arouses a specific feeling?

I thought it would liven up the film. That with lifeless puppets, the usage of a hand-held camera would provide a feeling of presence of a living cinematographer that breathes, moves and reacts. The Dardenne brothers mentioned in one interview that before they start shooting, they rehearse like in the theatre. And then they tell their cinematographer to react with a slight delay. And that inspired me. I wanted to create a feeling that what we see is here and now. That we don’t know what happens next. That the camera observing it is delayed – it doesn’t react immediately, it doesn’t turn to see a character’s face, etc. Simply a feeling that the viewers can identify themselves with the cinematographer.

The delay you mention can be found mainly in documentaries, when the cinematographers react rapidly to what is happening around them. That they cannot do it in real time without a delay is purely a human factor that adds authenticity to the film.

It is a feeling of now – that we are experiencing it, that we are there. Some pedagogues asked me why we can’t see the characters’ faces and find out what they experience in certain scenes. But I did it deliberately, turned the camera the other way and had it watch the scene from behind, staying out of the character’s face. I wanted to create a feeling that the camera is interested in the character, but it keeps its distance.

I think the whole film has a wide dynamic range – from quiet and slow scenes to rapid, fast and expressive parts, such as running on stairs that are supported by the sound. I have a feeling that the soundtrack was created parallelly with the images. I can’t imagine creating images first and then adding sound. And the reason that the film’s composition is so complex is that you didn’t leave adding sound to the end. How did you work on the sound? Did you have a concrete concept?

I studied music and sound design and so I can sort of hear the film when writing the script. So when we were looking for a sound engineer, I thought it would be easiest if I did it myself rather than explain to someone what I mean. I created the first sound mix and my classmate Miroslav Chaloupka helped me to make it professional. I used a dictaphone to record the sounds of water, kitchen and ordinary things. The film’s authentic sound should emphasize the dirty, raw and documentary feeling.

You studied sound design in Moscow? What is the approach to this field in Russia?

I studied musical direction at the Gnessin Russian Academy of Music, where there are excellent pedagogues. We recorded jazz, rock and a symphonic orchestra and then mixed it. I also gained a lot of experience when I worked in a theatre as a sound designer. I was responsible for creating sound dramaturgy of theatre performances. With some directors, I only followed instructions, but with others, I really created sound design: they let me choose and design music and create the atmosphere, so it was a really important experience.

What should I imagine under the term musical direction? Is it more recording or editing?

Recording and mixing. When recording live classical music, the most important thing to do was to set the microphones in the concert hall properly. But when recording a variety show, we could experiment with the mix.

So, you could actually do the film’s sound mixing yourself. After all, you know how to do that…

Perhaps I could. But we didn’t do film at the academy, so I don’t have any experience with 5.1 film sound. I knew that Miroslav is excellent, so I did the first mix as a dramaturgy and he transformed it into film sound.

Daughter is your graduate film, but you were already creating and testing its visual form before. What course was it?

Let me start from the beginning. I wrote the draft of Daughter for the entrance exams to FAMU. Towards the end of our second year, when we were told to think about our graduate film, I came back to it. I realised I was still interested in developing it. It was also important that I started to look for a producer and found Karolína Davidová, who wanted to work on it with me. Karolína suggested submitting the project to the Animarkt pitching forum in Lodz. I knew I wanted to make the film with some ambitions, to try some professional methods, not just make a student film. And so, I prepared some visual art for it and submitted the project to Animarkt. I went to Lodz in October 2017, at the beginning of my third year at FAMU. It was my very first pitching forum. It was great seeing presentations of other projects, and I found out that when pitching for animated projects, you have to present a teaser or at least animation tests. You can’t rely on mere words; you need to show something.

Karolína also organised an internal pitching for departments of animation and production where we presented our projects and tried to attract producers. Thanks to that, I started working with Zuzana Roháčová. Karolína eventually quit the project because she was planning a family, but she introduced me to Martin Vandas who at the time happened to lecture on pitching at our department. The course’s output was an application to the Visegrad Animation Forum in Třeboň that was to be submitted in December. I already knew that I needed some visual teaser. I knew I wanted to try hand-held camera and the aesthetics of documentary film. And in the winter semester, we had a puppet course. So, it all came together. I decided to make some tests in the course and film a teaser. I wanted to find out if the hand-held camera and eye painting that I came up with would work. Eventually, I submitted the project to the Visegrad Animation Forum. Everyone liked the teaser; it was something new. We unfortunately didn’t win, but the positive feedback from film professionals was very inspirational to me. I knew I was on the right track. So, I started making props, and in August 2018, I started filming.

I have to say that my school was very accommodating with regard to my film. They let us use the FAMU studio for two months. It is a smaller studio, but it was perfect for my purposes. They let me do what I wanted in August and September. They let me be in the studio overtime, even 12 hours a day, on Saturdays and Sundays, every time I needed it. The following two months, I used our department’s studio. Thanks to Martin Vandas, we also applied for a grant from the State Cinematography Fund. It helped us to pay for some materials and a professional post-production.

So FAMU helped to structure the film’s development within the course led by Martin Vandas? It’s wonderful that you have something like this and that you get a glimpse of what to expect in your future professional life.

Exactly. During the pitching lectures, Martin and Anna Vášová explained how to prepare our projects properly. We had a chance to test everything in practice. I don’t think there was ever a course like this at our department, and I think that it contributed to its recent successes. It’s because we started to think more professionally. It’s not just about making a graduation project anymore. 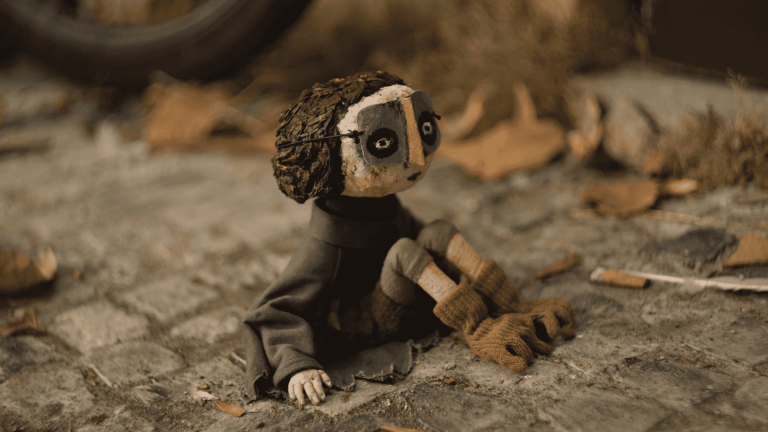