Diana Cam Van Nguyen was born in 1993 in Cheb. She did internships in Birmingham and Lyon and was artist-in-residence in MuseumsQuartier in Vienna. She is now in a Master’s programme at the Department of Animated Film at FAMU. Her Bachelor’s film The Little One (Malá [2017]) has screened at many domestic and foreign film festivals and has won several awards (Noc filmových nadějí, Euroshorts and others). The film was also competing for Best Documentary Film for Children and for the ECFA Doc Award at Berlinale 2019. Her next short film Apart (Spolu sami [2018]) was awarded Best Czech Experimental Documentary Film at Ji.hlava IDFF and had its international premiere at IFF Rotterdam. The film was also nominated for a Czech Lion Award in the Student Films Category and a BAFTA Student Award, and won several awards (Finále Plzeň, Febiofest Slovensko, Anifilm, SICAF, etc.). Diana also won the Josef Hlávka Award, which is awarded to students for exceptional scientific or artistic work each year. She specializes in animated documentaries and deals with personal topics in her films.

It really suits me because I like authentic films based on real stories and I also like films where I know the author is sharing their personal experience. It is easier for me to narrate something I know. I started writing the script for The Little One around 2015/2016, but I did not conceive it as an animated documentary at that time. The important thing for me was that it was an autobiographical film, but I did not call it an animated documentary back then. I only started later, in 2017, when I finished the film. I absolutely adore Persepolis (Vincent Paronnaud, Marjane Satrapi, 2007) and I know there has been much discussion about the film, whether it is an animated documentary, or not. The director, for instance, does not mind if somebody labels the film an animated documentary, but she does not use the term herself. After shooting The Little One, I started writing my Bachelor’s thesis about animated documentary. In the process, I also discovered that there had not been that many theoretical books written on the subject, so I probably read all of them that were available in English. The theory helped me a lot to shoot my next film (Apart), which already corresponds much more to the animated documentary genre. I am now working on my Master’s film. I have the script written and shooting starts in a month.

Is the Master’s film you are now preparing going to be a feature film?

No, it is going to be a short film as well. It is almost impossible to shoot an animated feature film in this country, let alone at university… the Master’s film is going to be something in between The Little One and Apart. It is a bit about my life but in a more documentary style. I draw upon my father’s letters, which he wrote to me when I was 11 when he was jailed for a year. It is a about a daughter-father relationship when they cannot be together.

Are you planning a completely new way of animating?

Yes, and I am a bit nervous about that. Since I have kept the authentic letters, I am going to animate with them directly. The letters will come alive and will do things. I do not normally work with stop motion animation – I focus more on drawing – so, it is going to be a completely new experience for me.

Are there any criteria, rules, definitions for animated document?

The simplest definition is the three rules by Annabelle Honess Roe, who wrote the book Animated Documentary. First –it must be animated; second – the film must be about real events and real people, not about an unreal world. Third – it must be presented at a documentary film festival to get such status.

You are already planning another animated documentary, which will be your third. Do you have a feeling that you have come into your own?

Yes, I do, because I think this is something I understand the most at the moment. I feel it is also popular now. The “animated documentary” label gives the film an advantage in the end because the audience is very receptive to it, especially in the Czech Republic. Abroad, it has been a well-established term for quite some time. This brings one big advantage; the films are in high demand at festivals of both animated and documentary films, so, as a result, they can reach bigger audience. There have been moments when I felt people see it a bit too much as “arthouse”, that they prefer classic narrative films. But I guess it depends, both on the festival and the distributor.

It is easier to identify your films through the genre and narrative style, rather than visually. This is something not very common in animated production…

Yes, you are right. Animators, at least the more famous ones, became famous through their own visual style. So, in the end, everyone knows their style, and they continue making films in that particular style. But this is not my case at all. I am not like that, but I think it might be a disadvantage in some respects. I know from other animators, who are illustrators as well, that they mainly use their own style of art and write the script based on it. I do it the other way around. I simply always adapt the visual style to the particular topic, to each film individually. For instance, I liked the visual style of Apart so much that I wanted to continue in it. I tried applying it to the Master’s film, but it did not work anymore. So, I had to come up with a new approach, principle, and visual style again.

You said that it is important for you to put personal experience into a film. Why?

I do it because it is the only thing I do, and I cannot do anything else. I would like doing funny things, for example, because I think it is great when everybody in the screening room laughs, but I am just not funny. In general, I do not like kitsch, so I try not to overdo things. With Apart, I knew it had a very strong topic, but there was a danger of exaggerating it. So, I had to be careful; I wanted it to be as sensitive as possible. It is important for me that the film is authentic; I do not want to make things up… to lie to the viewer.

How did you choose the topic for the film Apart?

It was completely natural because the three stories are stories of my very good friends. With two of them, I lived through it at high school, and the older I was the more I felt that it kept happening to more and more young people in my age. Not only the death of parents, but also of siblings, for example. I felt it was a taboo in a way that the world does not realize that also young people have this experience and that they live through different stages of grief. That was my first impulse. It was definitely not calculated in a sense of, “Let’s put young people and death in contrast”. I already asked them in my second year at FAMU if I could make a film with them because I knew I was going to have a seminar called Animation and Actor in my fourth year, where I would have to interlink an actor’s film with animation, and I thought that would be a good topic for this kind of seminar.

We were thinking about a tutorial with Honza Gogola, but in the end we just did not – I do not even remember why. It was in a stage when we were more talking about the film, because we were thinking up the picture. I think they do not work that much in this area at the Department of Documentary Film, which is partly because the makers of animated documentaries are more animators than documentarians. However, I think that if I approached them with it they would have certainly agreed it is a documentary. But we tried to show the rough editing to Honza Daňhela. This was in the stage when it was completely played in audio, and instead of abstract passages there was only black colour. We told him about the abstract passages, but it was quite hard for him to picture it. He looked at it and said, “Well, I don’t know… what am I supposed to imagine when it is animated; I don’t know how it is supposed to look.” Even when the film was in quite an advanced stage, because the editing did not change at all, people could still hardly imagine it. I am afraid there are very few people in the Czech Republic who could supervise my thesis in the field of animated documentary film. Mr. Kubíček from our Department, who was my thesis supervisor, told me himself, “Diana, I do not really know that much about it; I will try to supervise your thesis, yes, but it will greatly depend on you,” which is how it was in the end. Eliška Děcká has the biggest awareness because she occupies herself with contemporary animation and monitors what is happening around the world. And animated documentary definitely fits more into animation than into documentary.

Do you have any idea where you might use your talents after graduating from FAMU?

I am not a very practical person, so I am quite afraid how I will make a living when I finish FAMU. Since I mainly develop my own production, that is, I work on my own things; I think I would not get a job in a film studio anyway. And, in fact, I do not see myself working in a studio as one of the animators there because I do not think that I am good at it. The only thing I am good at is directing my own things, but it is quite hard to make a living this way. So, we will see. 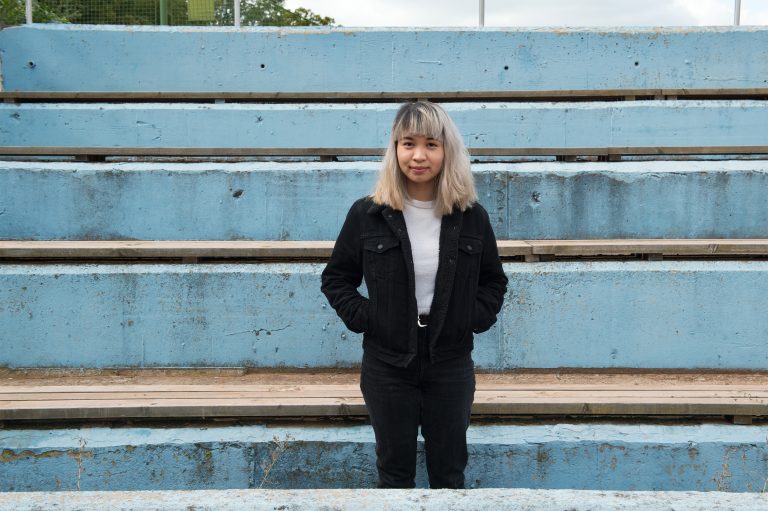