The first feature film by the theatre director Alfréd Radok was the first Czech film about the Holocaust at the same time. In 1950, the leading critic of The New York Times, Bosley Crowther, said that it was „by far the best and most shocking film about the Nazi persecution of the Jews“[1] he had seen so far. Two years later, André Bazin admired in Cahiers du cinéma how Radok had brought expressionist aesthetics back to life.[2] In Czechoslovakia, however, the film was only screened in marginal cinemas at the periphery of Prague. Even though it was not officially banned, Czech viewers could only rarely see it. It only became wider known in 1991 when it was broadcast on TV.

Films documenting the Nazi persecution of the Jews started emerging immediately after the War. The filmmakers faced the challenge of what stories to tell and how to tell them to capture the unprecedented monstrosity of mass transports, concentration and extermination camps. Some of the most impressive films about the Holocaust were made in Central and Eastern Europe. Wanda Jakubowska made The Last Stage (Ostatni etap, 1948); Aleksander Ford made Border Street (Ulica Graniczna, 1948). Alfréd Radok decided to tell the Wall story of the Czech Jews who were mostly ignored by the weekly papers of the time. This was only three years after supporters of National Socialism had killed many of his relatives and acquaintances.

Radok was half-Jewish and many members of his family had died in concentration camps. His grandfather had been tortured to death in Theresienstadt, where Distant Journey (Daleká cesta) was set and filmed. Radok’s father had been imprisoned in the Theresienstadt Small Fortress and had probably died in Mauthausen. When Radok was filming on location in Theresienstadt – with former Theresienstadt prisoners as extras, too – he was avoiding the Fortress. Radok himself was first a trainee at the D 41 Theatre under the avant-garde director E. F. Burian, and later worked in other theatres under a pseudonym. In 1944, he ended up in the Klettendorf labour camp close to Wrocław, Poland, but managed to escape from there.

After the War, Radok directed a few plays in the Divadlo 5. května Theatre, in which he allegedly first employed „film methods“. Together with the documentary filmmaker František Sádek, he wrote a screenplay, but it was not executed. When Sádek was making his comedy The Antlers (Parohy) in 1947, Radok participated in the shooting as an assistant artist. He found the subject matter for his directorial debut in the story by a Jewish lawyer named Erik Kolár who was spared deportation to a camp for a while as the husband of a non-Jew. However in 1945, he was still sent to Theresienstadt. Kolár turned his experience into a film story called The Journey (Cesta). Immediately after the War, he sent it to the freshly nationalized Barrandov Studios.

In The Journey, Kolár captured the period between February 1939 and May 1945 from the perspective of a married couple – the Jewish doctor Hana Kaufmannová and her non-Jewish colleague Antonín Bureš. Together, they face segregation and exclusion from society driven not only by the Nazis, but also by eager Czech anti-Semites. Neither spouse is spared deportation. Hana ends up in Theresienstadt, and Antonín in a labour camp. At the same time, Kolár looked at the War from the perspective of a Jewish child – Hana’s younger brother Honzík – and members of the resistance movement.

At the Barrandov Studio, the story was assigned to the screenwriting duo of Miloš Makovec and František Vlček. To Kolár’s dismay, they turned the collective portrayal of Czech Jews and resistance fighters into a love triangle. Alfréd Radok was appointed to rewrite the screenplay and take on the direction. In the spring of 1948, only a few weeks after the February assumption of power by the Communist Party, Radok prepared the final version of the literary basis for Distant Journey together with the screenwriter Mojmír Drvota. They preserved the drama of a mixed marriage and the motif of cooperation between Jews and Christians. However, they set most of the plot in Theresienstadt and took into account the broader historical context. The tone of their story is also more pessimistic. Radok wanted to show that the hatred of Czechs towards the Jews (and against the „unknown“ in general) didn’t disappear with the fall of Hitler but only took a less explicit form, which he was experiencing himself.

The Film Artistic Board (Filmový umělecký sbor) first gave their opinion on the screenplay in May 1948. They saw Kolár’s story as the best of the film bases presented, deserving special care to „be made into a film of high ideological and artistic values ensuring success on the international stage“. FIUS even argued for a less restrained approach to the budget for the realization, which would ensure an „uncompromising solution of the film’s artistic problems“. According to the opinion, the screenplay didn’t meet the increased expectations. It was allegedly obvious that it had been made in haste. It was to be rewritten to have a more robust dramatic structure and not to contain unnecessary scenes reducing the dramatic tension.

Another opinion from June 1948 criticizes the pathetic and theatrical ending and attempt to dramatize scenes depicting events which are tragic enough on their own. It allegedly described the drama of the Second World War in an „artificially overexposed, expressive manner“. The opinion again criticizes the lack of justification for some scenes in the story. After further comments made by Kolár, among others – according to whom Drvota along with Radok didn’t understand his intent – and after further modifications, the screenplay was approved for production. In the meantime, however, the approach of the Barrandov Studio management to the urgency of the work had changed. A rigorous realization was no longer a priority. Instead, the production costs were to be reduced.

The shooting started in July 1948 and ended in September. In that time, the conditions for filmmaking in Czechoslovakia were dramatically changing, and with them the expectations of culture as such. The relative artistic freedom was soon to be replaced by dogmatic adherence to the Zhdanov Doctrine. Radok’s artistic reportage certainly didn’t meet the criteria of socialist realism. This is what the Barrandov Studio management realized when presented with the finished film at the beginning of 1949. The changes compared to the last screenplay version mainly consisted in reducing the motif of the Czech anti-Semitism and Czech collaboration. Also added was an off-screen comment recapitulating the Nazi crimes in Europe.

The most striking departure from Kolár’s sober realism was Radok’s narrative style, revealing Radok’s knowledge of German expressionism and Orson Welles’s Citizen Kane (1941). Like Welles, Radok was using theatre methods, and employing light and sound in an expressionist manner and in an original way; he was confronting the acted scenes with the material of the newsreel weeklies and propaganda films of the time. Through a juxtaposition of different perspectives, sometimes even within one shot, he contrasted the „big“ history with „small“ personal stories. Radok resorted to expressive poetics in an attempt to grasp the „inner truth“ of the Theresienstadt ghetto and to let the viewers experience the horror of the constant presence of death experienced by the imprisoned Jews. In his opinion, a realistic depiction of cruelty wouldn’t have the same effect.

In spite of the changes and departure from the screenplay, the film was approved for distribution in May 1949. In their opinion, the censorship board appreciated the fact that through one family Distant Journey was showing the suffering experienced by the entire Jewish nation during the War. However, it soon turned out that for the Communist leaders of the country, this was not a topic they would like to give much visibility to. The Holocaust was only on the table again after the cultural liberalization of the 1960s, with Zbyněk Brynych directly building on Distant Journey with his Transport from Paradise (Transport z ráje, 1962) taking place solely in the Theresienstadt ghetto.

Even though 42 copies of Distant Journey were made for the cinemas, its release was only limited, and it was almost not covered by the media after the première. The film was mainly screened at the periphery of Prague and in the country, and not in the centres of major cities. The order limiting the distribution and promotion of the film was issued by the Ministry of Information after Minister Václav Kopecký met with director Otakar Vávra. Being able to find a place in every regime thanks to his liquid views and perhaps out of envy and astonishment over Radok’s artistic talent, the director claimed that Distant Journey was an artistic and ideological fiasco. He also shared his view with Kopecký, who probably also on that account ordered the „invisibilization“ of the unique and timeless film.

Whereas at home Radok was accused of formalism and pessimism and the conditions for his artistic creation deteriorated, abroad his directorial debut drew wide attention. As early as in July 1949, Distant Journey was screened at the festival in Knokke-le-Zoute, Belgium. In the following year, it was released in Switzerland, Israel and the US, and later on also in France and other countries. Some publicists admired the film whereas others, in the spirit of Adorno’s famous essay Cultural Criticism and Society claiming that to write poetry after Auschwitz was barbaric, criticized the „aestheticization“ of the Holocaust and attempts to portray the unportrayable. Anyway, the media coverage was extensive and so, paradoxically, it was easier for Western viewers to find out about the film and watch it than for Czech ones.

In spite of the domestic rejection of Distant Journey, Radok and Otomar Krejča, playing Antonín, became leading figures of Czech post-war theatre. Krejča founded the Divadlo za branou Theatre, while Radok was working in the National Theatre and was one of the main authors of the Laterna Magika show for Expo 58 in Brussels. He only made two more films, the musical The Magical Hat (Divotvorný klobouk, 1952) and the farce Vintage Car (Dědeček automobil, 1956) with the beginning Miloš Forman as his assistant director. Three days after the beginning of the Soviet occupation in 1968, Radok immigrated to Sweden where he was trying to establish himself in the theatre with limited success. He died of a heart attack during a brief visit to Vienna in 1976.

The expressive narrative of the story of a Jewish family is one of the first and at the same time most impressive film reflections of the Holocaust. The stylistic inventiveness of the film and the unusual approach to documentary shots still attract the interest of viewers and film historians alike to today, leading us to reflect whether it is this aesthetic representation of the Holocaust, emphasizing its own artificial and fictitious nature, which is a suitable way of sensitively treating a historical trauma. 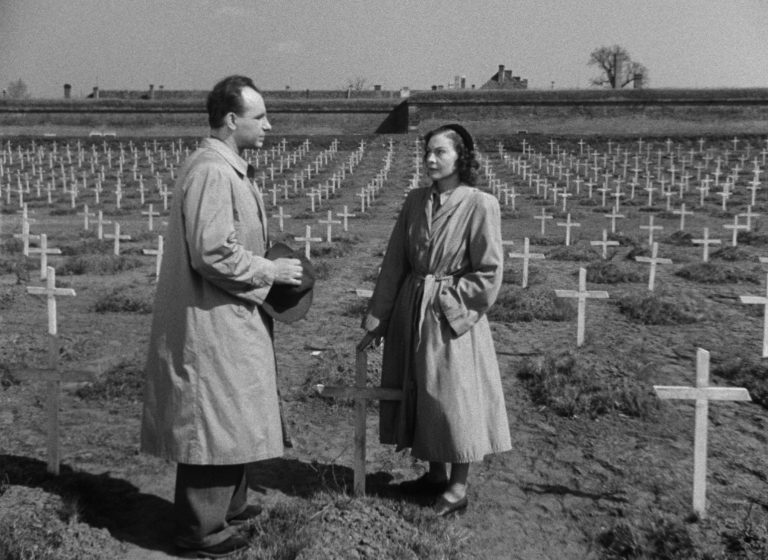