Franz Milec (* 1993) is a Slovak experimental filmmaker and media artist currently based in Prague. In his artistic work, he tells stories with the aid of data. He completed his bachelor’s and master’s studies at CAS FAMU[1] (2014–2019), and over the past few years has screened his films at festivals and exhibited works in galleries in the Czech Republic, Slovakia, Germany, Austria, Poland, Canada, the United States, the United Arab Emirates and many other countries. Milec is a regular participant at the Jihlava International Documentary Film Festival, and his works are part of the Canadian Filmmakers Distribution Center catalog and the Viennese Aa Collections.

Could you describe the area of your audiovisual interest and how it evolved?

I would say that for my work film, in all its diversity, is at center stage. I also deal with installations that can take various forms, from video art to performance, and earlier I was mostly attracted by the art scene, but gradually I became to realize that the closest thing to me was experimental film, really. It is mainly because its creators are not exclusively based in the cultural centers of big cities, but also because of the form of its institutions. Film can be screened at a festival or in a cinema for an audience that shares a common experience. This is the presentation form that I prefer above all others.

Does this mean that the cinema presentation is also interesting for you because the film is screened from start to finish, and that you have control over how the viewer sees it?

Yes. For me, the narrative structure of the film is important, and at the same time, I like the cinema for its apparatus. One experiences a level of comfort; the picture is beautifully sharp, and the sound in 5.1 also physically affects the viewer’s body. I also like the “comfort” that I, as the creator, will send a film somewhere and someone else will screen it. There is no need to create an entire projection set-up, as in a gallery. When a person wants a blackbox in a gallery, he or she spends a few days installing, and it may happen that this is done for a minimum of visitors. This is a big disappointment for me.

But isn’t the cinema space too limiting for you? Isn’t there any limiting factor – perhaps with regard to technology?

Rather the opposite. The cinema allows you to work with large data flows and show works in high quality. In a gallery, on the other hand, one often does not have that possibility, because the video runs from a small media player that does not handle uncompressed files. In such projection conditions, the viewer loses part of the experience. So, I like the format of cinema, which by some can be perceived as limiting, but for me encourages me to create. Basically, film in a cinema must have a “sleek”, “polished”, “finished” look in order for the viewer to accept it, without technical mistakes or problems. So, I am satisfied in this respect – even with the limits of the film industry.

Has it always been like that, or have you gone through different types of presentation of audiovisual work?

I must say that I had this point of view from the beginning, but it was not always technically possible for me, or I did not have the knowledge to bring my work to a point where it was at least partially perfect. At FAMU, I had a lot of support in this respect, for example from Sara Pinheiro, who teaches sound design at CAS. On the other hand, I have also experienced some “resistance” during my studies, in the sense that some teachers criticized my works for being too slick and designed – like a sort of experimental mainstream (laughter).

Can we have a closer look at some of the topics you deal with in your work?

I will focus on the past five years, when I worked on a series of works related to global political developments, especially America’s fall as a world superpower. To a large extent, I have analyzed the classic American myths that relate to modernity or American futurism and science fiction. This series, which I have named for myself Lost Futures, was largely influenced by science fiction camp – to some extent a cliché, which has become a reality in the past decade.

What topic do you deal with in the movie Abstract Horror?

Abstract Horror is my graduation work, and I worked on it for about a year. At the beginning, I was very interested in the theme of spirituality in the technological world and its manifestations. In my research, I came across the neo-reactionary movement, or dark enlightenment movement, which originated in the last decade in the Silicon Valley environment. It intrigued me because of a scandal. The well-known programmer Curtis Yarvin was recalled from one conference as a speaker because on his blog he was found to have promoted white nationalism, extreme right politics, advocate slavery, and proposed that it would be great if democracy would finally end and be replaced with a monarchy, and the new aristocracy would be the CEOs. One of the fundamental “ezo” ideas of the neo-reactionary movement was that there is very likely an artificial intelligence that created a simulation of this world and we now inhabit it. This artificial intelligence makes us support its future expansion with the belief that anyone who does not participate in it will be punished right now. This led me to the philosopher Nick Land, who has been covering the whole movement for several years, and who is also the main spokesperson of my film. I shot a documentary interview with him over Skype, discussing his ideas about the future of the world and how he thought horror should work. The film first leads the viewer to agree with Land and be enchanted by his world, but then reveals its total destruction. Based on the interview, I then started to create animations that were created primarily in the Unity gaming environment, and at the same time I used machine learning, seeds of artificial intelligence that processed the visual input and created various artifacts and a handcrafted feeling of the image.

What are you working on at the moment?

In the current coronavirus crisis, I have put the film projects on hold for a while and instead I am working on the Negative Affirmations series, which is designed for online presentation. I try to create short animated videos for mobile phones, like time boxes that will capture human and inhuman conflicts in today’s world. The first example is already available on my YouTube channel.

I also have a project called The Specter, which will deal with environmental mourning and will be from 16mm found footage material from the fifties that I want to meddle with digitally, in a subtle way. The narrative will focus on an American oil tycoon who has come to haunt the spirit of the future. It will be a Dickensian Christmas carol for the Anthropocene.

Your remark that you are attracted to the cinema space, allowing the presentation of work in the highest quality, leads me to the thought that maybe for that reason you have gone to a film school rather than a school associated with gallery spaces. Is that so?

CAS and its profile was very important to me – precisely because film is still a central part of the classroom. It has moved me forward a lot as a filmmaker, and, for example, I am very grateful for Helena Bendová’s lessons; she is always able to bring students in contact with both contemporary cinema and the oldest audiovisual theories. Thanks to not only this, I am working on an application for my doctoral studies, and I have called my dissertation CFX: Critical Effects Manifesto. With this dissertation, I would like to improve the reputation of film postproduction and look at it not as a decoration, but rather something that comes from within, the technology of the work. I want to find out how to engage post-production tools in everyday art creation and how to start a work from its effects, like Holly Herndon or Arca are doing in music.

During your studies at FAMU you completed two internships abroad. Could you describe this experience?

My first internship was in Berlin’s Schwules Museum, for which I made videos. It is an institution that patronages various areas of queer history. We made exhibitions of classical, modern and contemporary art, and I helped to communicate them to the public. For me it was mainly a way to contribute a little to LGBT + activism. In Berlin, I also managed to smuggle myself into Albert de Camp’s studio at the University of the Arts, which focuses on interactive and generative art. Alberto was perhaps the nicest teacher I have ever had, and he was a great example for me that teaching art need not be as confrontational as is customary in our country. Thanks to this studio, I also got into Unity and game design as a part of my artistic practice.

The second internship took place in Canada at my film distributor CFMDC, which provides a shelter for Canadian filmmakers and audiovisual artists, but also expands its collection to include foreign filmmakers. In Jihlava I met one of its curators, and through her I got into their collection and was offered an internship in Toronto. I helped with archiving films, making copies for festivals and various administrative stuff. Overall, I had a glimpse into the functioning of this institution, having fun with restorers or curators who cooperate with both leading and local festivals. The CFMDC then helped me organize a solo exhibition at the Toronto Media Arts Center, next to my internship. 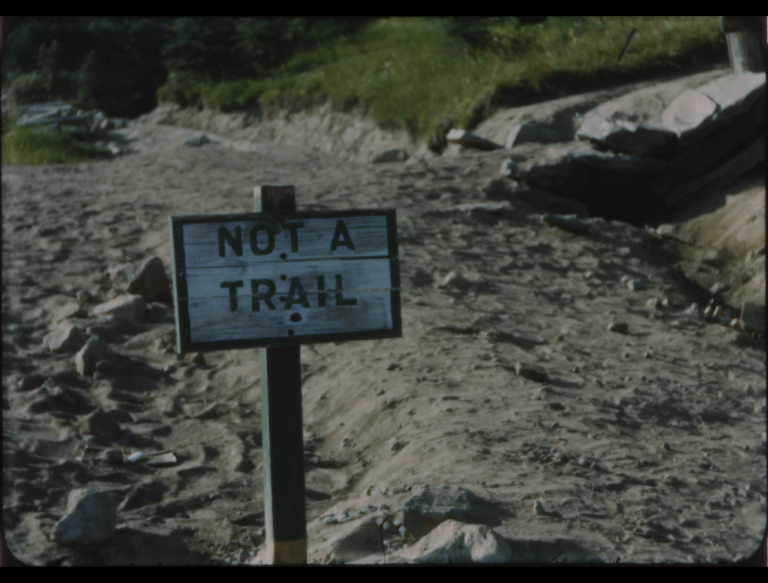