How to Drown Dr. Mráček. From a short story to a screenplay

Very popular in Czechoslovakia of the 1970s were comedies adding supernatural motifs and fairy tale creatures to the grim reality of the normalization period. One of the most successful works in this series was Václav Vorlíček’s film released in cinemas in spring 1975. With more than 2.5 million viewers, the comedy How to Drown Dr. Mráček became the most visited film in the year of its release.

A recent screenwriting and dramaturgy graduate, Petr Markov co-wrote the screenplay with the proven Miloš Macourek. It occurred to Markov in the second year of the Film and TV School of the Academy of Performing Arts (FAMU) to include fairy tale creatures in our world. He assumed that water goblins, dwarfs, or ghillie suits are immortal and if they existed in ancient times, they exist until today.

Markov wrote the synopsis entitled simply Water Goblins (Hastrmani) in February 1972. It was an anecdote about a water goblin’s daughter Jana falling in love with a mortal trying to deprive her of her apartment. Their love is so deep that in the end, Jana turns from a water creature into a mere mortal. It was basically a variation on The Little Mermaid.

Markov elaborated on the premise in a short film story entitled Only the Best (Jen to nejlepší), including one more important character: Jana’s overprotective father standing in the way of his daughter’s happiness (on the pretext of only wanting the best for her). The author originally imagined a musical comedy with a pro-population message. One of the reasons Jana was to become a human was to conceive a child.

The short story was offered to Bořivoj Zeman or Jaroslav Balík. In the end, it was Václav Vorlíček who made the first version of the screenplay with Markov in November 1972. The basic plot elements remained the same, but the poetic musical comedy became a more ironic modern fairy tale.

Between 1972 and 1973, a new dramaturgic team was created in the Barrandov Film Studio led by the previous external dramaturgist Vladimír Kalina. Kalina’s team took on Markov’s and Vorlíček’s water goblin screenplay. At the same time, the creative team was joined by Miloš Macourek.

As Macourek mentioned in several interviews, he had identified in the story, involving supernatural beings and humans, motifs they had already used with Vorlíček in The Girl on the Broom (Dívka na koštěti, 1972). The second and third versions of the literary screenplay were thus made by Markov and Macourek.

With Macourek’s contribution, the central idea of the plot changed. The film was no longer an incentive for reproduction; it was meant to deepen the rejection of materialism and exploitation. These negative values are represented by the possessive Wasserman, the father of the main heroine, recklessly exploiting others for his own interests.

The fourth and final version of the screenplay, elaborating on the motifs and motives of the previous ones, was made by Macourek only. The plot line of the final story is the effort of a conscientious housing officer to move a family of Prague water goblins to a first-class apartment. However, the inhabitants of a damp dwelling in Prague’s Kampa don’t like the idea of living in a dry block of flats. Wasserman is plotting how to eliminate the uncomfortable officer.

As Markov remembers, even though the literary basis was done in 1973, the shooting had to be postponed by one year due to an illness of all the three main authors. When the screenplay was finally executed, Vorlíček offered an acting opportunity to both legends, such as Miloš Kopecký, František Filipovský or Vladimír Menšík, and young stars, such as Jaromír Hanzlík and Libuše Šafránková.

The unique atmosphere of the film is completed by costumes by Theodor Pištěk, original tricks by the cinematographer Vladimír Novotný, and music by Vítězslav Hádl who also composed the opening song A Maiden Knew a Man (Znala panna pána) sung by Helena Vondráčková and Václav Neckář.

In the end, the film was very different from the original synopsis. Nevertheless, Petr Markov came back to the original idea in his book The End of Water Goblins in Bohemia (Konec vodníků v Čechách) published in 1980. Even though the story differs from the film, the writer used several ideas and dialogues from the short stories and the different versions of the screenplay.

The film How to Drown Dr. Mráček is now coming back to the cinemas in a new digitally restored version. 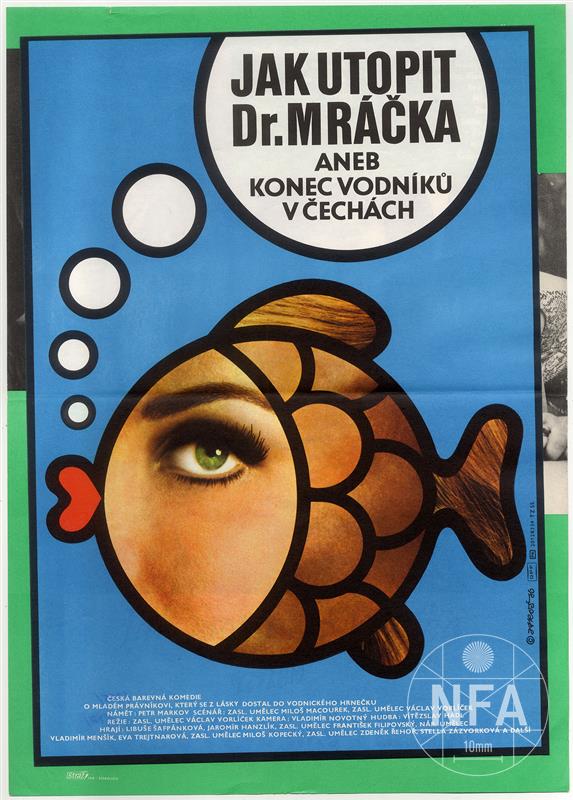