The digitisation of Jan Kříženecký´s films

The aim of this project was the digitisation of the preserved films of Jan Kříženecký, the first films made and presented in the Czech lands. In this case, we decided not to use the term “digital restoration”. Since our aim was to preserve the historical value and authentic photographic quality of the films, digital retouching would not be appropriate. We wanted to present the films in a form that would respect the current state of the materials and, at the same time, make them accessible to contemporary audiences.

The digitisation was based on film stock of various origins: a major portion had been collected by Jindřich Brichta at the National Technical Museum, probably already during the interwar period. The materials came into the Národní filmový archiv in many waves, most recently in 2002. Kříženecký’s films survived in various forms: while some of them were preserved as original negatives or vintage prints, others were preserved only in the form of acetate prints made in the second half of the 20th century. Some of the films were preserved during the 1920s in the form of nitrate prints,[1] under conditions that did not respect their original frame setting or their photographic quality. The film strip shifted in the printer to such an extent that a visible frame line often appeared within the original frame. Consequently, these prints were deemed unsuitable as source materials.

Paradoxically, the films preserved by printing on safety material in the 1970s were in problematic condition, while the materials that survived on the original nitrate film base have outstanding photographic quality, in some cases even without significant chemical or mechanical damage. Apart from some prints that have undergone substantial degradation or disintegration (such as Kočárová doprava [Coach Transport, 1908],[2] Svatojanská pouť v českoslovanské vesnici, [Midsummer Pilgrimage in a Czechoslavic Village, 1898], and Slavnostní vysvěcení mostu císaře Františka I. [Grand Consecration of the Emperor Franz I Bridge, 1898]), or exhibit major mechanical defects (such as Smích a pláč [Laughter and Tears, 1898], and Dostaveníčko ve mlýnici [An Assignation in the Mill, 1898], most of the film materials dating to the time of their first screening do not show any noticeable signs of aging. In particular, the original camera negatives, which have not been used as often as, for example, the vintage prints, are in excellent technical condition. Authentic photographic materiality thus triumphs over the ravages of time.

The analysis of documentation preserved in the National Archive, the Národní filmový archiv, and the National Technical Museum, as well as the materials found in the Cinémathèque française and various studies on the Lumière brothers and Kříženecký, provided us with basic information on the specific features of the digitised films. A 2017 article on the Lumière brothers by Laurent Mannoni helped us perceive the original film stock in a way that better reflects its uniqueness.[3] Although there is still considerable uncertainty about the methods Kříženecký used to process his films and about some of the physical and chemical properties of the film strips, these new findings played a crucial role in determining our approach toward the digitisation.

Kříženecký used a “Cinématographe-type” apparatus for filming, which he acquired directly from the Lumière brothers in 1898,[4] and which has been preserved in the National Technical Museum. This device served not only as a camera but also as a printer and a projector. In Kříženecký’s films, we can observe several technical particularities typical for films shot with this device. The most obvious feature of this model is undoubtedly the single round perforation on each side of the film frame.[5] Furthermore, on the left side of the frame there are also remnants of fuzz from the velvet strip placed at the projector gate. We can also observe vertical instability, which was quite common at that time, but more visible with the Cinématographe-type, as well as horizontal instability, which was a problem specific to films shot on this apparatus. The film feeding mechanism of the cinematograph, which ensures the motion of the film strip in the camera and keeps it in place during exposure, causes substantial fluctuation of the image during screening.[6] Nevertheless, the photographic  image is generally very sharp and characterised by a large dynamic range.

The Lumière film strips[7] are also specific in many respects. One of their typical features is high sensitivity to static electricity that can occur during filming or printing, and can leave traces on the emulsion when there is electrical discharge.[8] The contemporary viewer might be most surprised to discover that the original prints are not black and white, but monochromatic: in the case of Kříženecký’s films they are yellowish-orange, sometimes with visible colour variations between individual prints. This single spread of colour over the entire surface of the film might seem reminiscent of the practice of film tinting, which existed since the very beginnings of cinema. However, the homogeneity of the shades, as well as their presence in films shot by various “cinematographers” from different parts of the world and developed with varying techniques, etc., indicate that the Lumière film stock probably already contained colour prior to the printing process.

All this information has helped us appreciate the key features of the cinematographic apparatus and the Lumière film stock, as well as the aesthetic options offered by them. However, it was also necessary to account for why some of Kříženecký’s films have a different exposure level than other films shot on Lumière stock. Most of the Lumière “opérateurs” [9] had previously worked in the Lumière factory, which produced photographic plates and film stock. Jan Kříženecký, however, was a photographer and construction technician, not a Lumière opérateur, so he only learned how to work with the camera and the processes of printing, processing, and projecting only after he obtained the cinematographic apparatus. It is likely for this reason that some of his films, especially Svěcení základního kamene jubilejního kostela sv. Antonína v Praze VII. (Consecration Ceremony for the Foundation Stone of the Jubilee Church of St. Anthony in Prague VII, 1908), were not optimally exposed. For a better understanding of the nature of the original film stock, it is also important to realise that Kříženecký initially bought six negatives and six positives from Lumières, in addition to the cinematograph itself, which means that each negative was intended to serve for only one positive print. The singular status of the prints of Kříženecký’s films is thus even more apparent than with most others: each individual print is unique.

In order to maintain the specific traits of the initial stock, and to preserve its value, we proceeded as follows: in the digitisation process itself, all surviving film stock (except duplicates in poor condition) was first scanned at 4K resolution on a FilmLight Northlight 2 device with capstan drives – the original stock has a different perforation than modern film strips. These scans were then digitally archived to serve for future research or potential reinterpretation.

Digital retouching is usually performed after the scanning process, but we decided not to interfere with the material in this way, for two reasons. First, some signs of damage could not be retouched without creating an entirely new digital image. Second, since these were historically the very first Czech films which reproduced actual motion, we wanted to remain faithful to their original materiality. Such an approach highlights the authentic photographic quality of the artworks: soft contrast, depth of field, and grain survived without digital intervention.

We also tried to preserve the current state of the materials when carrying out colour corrections on the scanned original prints. Therefore, we adjusted brightness and tone, so that even traces of colour degradation, which are more intense and almost red, would be recognisable in all their nuances. Each film roll was graded separately, since the shades among them vary slightly – sometimes the saturation changes even within a single shot. Since we could not rely on period references for orientation, when processing other materials (modern prints, original negatives, duplicate negatives and positives), digital grading was performed so that the black-and-white photographic image was as discernible as possible. In cases where original negatives were used, we also present the films in their positive form in order to allow the viewer to compare the quality of the respective materials.

We also had to decide on the appropriate degree of digital correction with regard to image instability during the scanning procedure. Although it is technically possible to repair the image so that it is completely stable, we decided to compensate for instability only when it occurred as a result of the film strip fluctuation in the scanner. Additionally, if we stabilised the films according to the exposed or printed image, we would mask the instability created in the apparatus during the shooting. Therefore, we decided to use the perforations at the edges of the strips as reference points. However, stabilisation based on the perforations was complicated by the fact that they are not angular but round, since the software is capable of automatically stabilising the image only by referring to horizontal or vertical lines. On top of that, mechanical damage often made it impossible for the software to determine the location of the sprocket holes, so we had to move each frame manually. At the same time, due to their poor condition, the fluctuation of some film strips in the scanner was so irregular that the image occasionally slid slightly out of the scanner frame. Wherever possible, we decided to present the original picture frame in its entirety as well as part of the perforation.

Since the digitised films were intended for DVD and Blu-ray release as well as for cinema screenings (in DCP format), their screening frame rate had to be adapted. Since Kříženecký’s films were shot manually, i.e. in irregular rhythm, and were not screened at any predetermined tempo, it was not necessary to abide by any particular rate. If we were to adjust the frequency to natural motion, e.g. 18 frames per second, we would have to duplicate every third film frame and then change the rhythm of motion, which we found unacceptable. Therefore, we chose frame rates that correspond to standard projection frequencies for the target media: 24 fps for Blu-ray and DCP, 25 fps for DVD.

Due to our intention to reflect the materiality of the films, the aspect ratio was adjusted in order to make the entire frame visible (even during moments of vertical instability) and also the perforation whenever it was possible. This is the reason why the aspect ratio does not correspond with contemporary standards.

The most valuable outcome of the digitisation project is that we have made Jan Kříženecký’s films available in a form that would not have been achievable by photochemical procedures. The way in which they are now presented brings their diversity and material beauty to the fore.

[2] This fragment is also presented in the newly assembled compilation Jubilejní výstava Obchodní a živnostenské komory 1908 v Praze (Anniversary Exhibition of the Chamber of Trade and Commerce in 1908 in Prague, 1908).

[3] In his article, Laurent Mannoni outlines the development of various cinematographic devices produced by the Lumière brothers, including the Cinématographe-type, used by Kříženecký. Laurent Mannoni, Les Appareils cinématographiques Lumière. 1895, autumn 2017, no. 82, pp. 52–85.

[4] There is an invoice deposited in the National Technical Museum certifying that Kříženecký bought the Cinématographe and film stock from the Lumière brothers in May 1898.

[5] The only exception is the film Pomník Františka Palackého před dokončením (František Palacký Monument Prior to Its Completion, 1911) which was shot on film material with the standard four perforations.

[6] Such instability is clearly observable, for example, in Slavnostní vysvěcení nového Čechova mostu (Opening Ceremony of the Čech Bridge).

[7] The film strips used by the Lumières were exclusively manufactured by Victor Planchon. In 1896, he even founded the Société anonyme des pellicules françaises in Lyon, where the Lumière factory headquarters were located.

[8] The small size of the device also increases the amount of static electricity.

[9] The expression “opérateur” was used at that time to identify the profession, which included the jobs of both the cinematographer and the projectionist. 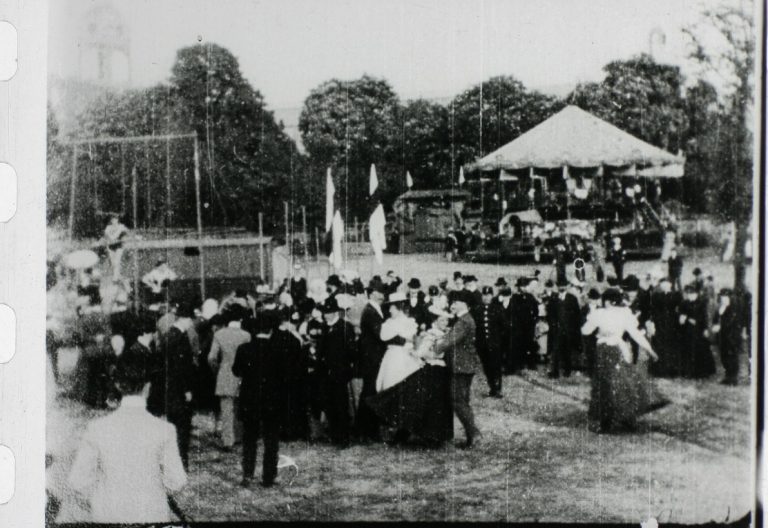