The realisation of the film Zborov, or the difficult path to a film epic

The film Zborov (1938) arrived to cinemas in January 1939, about a year and a half later than initially planned. This delay had a fundamental impact on its ultimate form and its place in the history of Czech cinema. With the help of archival materials and contemporary press sources, it is possible to reconstruct the complicated path that led to the realisation of this picture, which bears the lofty subtitle Filmová epopej z boje za svobodu národa (A Film Epic about the Struggle for the Freedom of the Nation).

There had been documentary and fictional films devoted to the Czechoslovak legions since the founding of the Republic in 1918, often made in collaboration with legionnaires themselves, such as Josef Kopta, František Langer, and Rudolf Medek.[1] In addition to clear tendencies toward historical traditionalism and the mythologisation of the Czechoslovak legions, another thematic thread increasingly emerged over time, which evoked the contemporary self-consciousness of the nation and its military preparedness. Zborov, which was based on a story by writer Rudolf Medek – who was also director of the National Liberation Monument and a direct participant in the Battle of Zborov – and completed during a time when the threat from Hitler’s Nazism was on the rise, thus appears to be a synthesis of these two tendencies.

At the end of the 1920s and start of the ’30s Medek met radio journalist and budding filmmaker J. A. Holman. They collaborated on the Czech version of the American documentary Forgotten Men (1933, Czech version 1934). This film, which was compiled from archival war footage, was distributed in several countries in regional versions that differed with regard to language and content. Medek and Holman supplemented their treatment with shots of the Czechoslovak resistance during the war and retitled it Neznámý vojín mluví (An Unknown Soldier Speaks) with the subtitle Bojem k svobodě (Fighting for Freedom). Soon after, Holman made another documentary film about the path to freedom and independence called Revoluce krve a ducha (Revolution of Blood and Spirit, 1936). During this time, he also gained experience shooting a fictional war film when he served as assistant director of the international co-production about the Russian-Japanese War called Port Arthur (Nicolas Farkas, 1936).

Holman began working with Medek on the story idea for Zborov in the autumn of 1936 to help prepare it for submission to the Prague production company Nationalfilm.[2] Soon after this Nationalfilm was fashioning its public image around this “epic national film”. Martin Frič was engaged as director and the premiere was set for July 1937, the 20th anniversary of the battle.[3] The Film Advisory Board (Filmový poradní sbor, FPS) at the Ministry of Industry, Trade, and Business (Ministerstvo průmyslu, obchodu a živností) was responsible for approving the film for production; for this process, they had also requested a decision from the Ministry of National Defense (Ministerstvo národní obrany, MNO). At the time, there was another story idea on this topic in the works, written by sculptor, author, and veteran of the Battle of Zborov, Metoděj Pleský for P. D. C. (Producers Distributing Company), which was oriented primarily on the distribution of American films in Czechoslovakia. In contrast to the complex portrait of society during World War I in Medek and Holman’s treatment, Pleský dealt primarily with events on the battlefield.

In their decision from February 1, 1937, the Ministry of National Defense resolutely opposed the production of two films on the same subject and recommended a consolidation of forces. From the two story ideas they received, the Ministry inclined toward Medek’s, and consequently P. D. C. stopped the work on its project.[4] The Film Advisory Board requested that Nationalfilm develop the story idea into a screenplay, however, since responsibility for directing the film had passed from Frič to the duo J. A. Holman and Jan Sviták at this time, further work on the project was put on ice until the summer. The premiere was re-scheduled for October 28, 1937, but in the end even this date could not be met due to the number of serious points for script revision stipulated by the Film Advisory Board in their meeting on August 12.[5]

The Film Advisory Board approved the revised script in September, yet at the same time Nationalfilm had announced a postponement of filming. With the start of autumn, conditions were no longer suitable for preparing and shooting outdoor location scenes. Further obstacles were the facts that many actors also had engagements in the theatre and that the standing military service members were being replaced with new recruits, so it had become more difficult to compose a cast of military extras.[6] In addition, there was an ongoing controversy between Rudolf Medek and Nationalfilm behind the scenes: the writer blamed the company for unnecessary delays in production, due to what he saw as the leadership’s incompetent interference into his work as well as its favouring of commercial productions over serious topics.[7]

The dispute, which remained at the level of non-public correspondence, came to a resolution in January 1938, thereby bringing the film closer to realisation. In April and May preparations were made to the terrain at the Milovice military area, which had been selected for the scenes reconstructing the battle. Jiří Slavíček replaced Sviták in the role of co-director and remained in this collaborative function with J. A. Holman until the film was finished. The two directors had a lot in common: in addition to being born in the same year (1901), they both had a technical education and had begun their film careers working under more experienced filmmakers, both domestically and abroad – Slavíček had also spent some time working in Hollywood.

As work on Zborov progressed, the press became increasingly interested in the details of the film’s ideological and technical aspects. Expectations of a magnificent yet also historically accurate spectacle were reinforced by public statements from professional advisers for the film, such as military officer, employee of the National Liberation Monument institute, and well-known painter and graphic artist Emanuel Prüll, who authored the systematically written article “The Tasks of a Military Adviser to Zborov”, published on May 27, 1938 in Filmový kurýr (Film Courier). According to this text, Prüll served as mediator between the filmmakers and representatives of the army, and he himself participated in the thorough preparation of specific scenes, for example by collecting archival documentation, creating a list of necessary materials, building a model of the battlefield, or simply offering his personal insight as a former legionnaire.[8]

Shooting itself began on June 13, 1938. The sets for almost all the interiors – apartments in Pilsen, the Peklo pub, a military hospital, and trench dugouts – were constructed in a Barrandov studio and the area behind the film studio was modified to create the sets for trench scenes.[9] In the second half of July, though, unfortunate weather caused the shooting of trench scenes to be suspended, and the crew instead travelled to Carpathian Ruthenia to get authentic shots of the Ukrainian landscape for the sequence of volunteers departing for battle at Zborov.[10] As reports on the first days of films began to appear in the press, a new date for the film’s premiere was also announced: October 28, 1938, the 20th anniversary of the founding of the Republic.

The battle scene could finally be staged in August 1938. Trenches had already been constructed in Milovice and artificial mud fields were created with the help of electric cables. On August 20, the field in Milovice began to awaken at about 3 o’clock in the morning: first the assistant staff entered, then the technicians, the pyrotechnicians, and finally a whole mass of extras composed of several units of the Czechoslovak army. General rehearsals continued throughout the morning and in the afternoon the scene was filmed by four 35mm film cameras and one lighter 16mm film camera that was also used to capture sound. This lighter camera was a Czechoslovak product, named Sonoreta 16, which had just been released on the market as a technical innovation for recording images with direct sound even in difficult conditions.

The successful realisation of the crucial scene proved to be only a partial victory. After overcoming all the internal obstacles of the filming process, the signing of the Munich Agreement on September 30, 1938 created a major impediment to the film. The Republic that had been given its blessing and encouragement by Zborov ceased to exist in its original form and the premiere on the 20th anniversary of its founding did not materialise.

After final modifications to the film were carried out in response to the new conditions following the Munich Agreement, a censorship permit was issued on December 29, 1938 for the screening of Zborov in Czechoslovakia.[11] After the film had a special pre-premiere, its festive premiere screening took place on January 5, 1939 in the cinema Blesk (the name of the cinema in the Fénix palace on Wenceslas Square at the time) under the auspices of the Minister of National Defence Jan Syrový. The film then began its run in cinemas on January 6 and received fairly high praise in both the national and regional press and in film magazines. Although there were a few exceptions and reserved assessments, reviews of the film were generally positive and accentuated the importance of Zborov in the context of recent dramatic developments: “The events that stormed over us in the autumn of last year leave a lingering sense of anxiety and hopelessness in our souls, and it is certainly necessary to look at the greatness and the sacrifice of those who were willing to lay down their lives so enthusiastically, almost superhumanly, for this country and this state, who found strength and courage to¨work and live for this country and state.”[12] The press reports also spoke about the enthusiastic reception for the film among audiences: Zborov reportedly “electrifies the spectators much like a national revivalist work”.[13]

After the declaration of the Protectorate of Bohemia and Moravia, Zborov became politically unacceptable and at the end of summer 1939 it was officially banned. It reappeared in cinemas for a short time after liberation in 1945 and in 1947 it landed on the list of educational films suitable for schools.[14] However, after February 1948, all traces of the film disappear until the late 1980s, when it became acceptable to speak about the legionnaires again. In general, we can understand Zborov and the circumstances surrounding its realisation as a quite rare example of the war film genre in Czech cinema and ultimately as a reflection of the rapid political and social changes of the late 1930s. 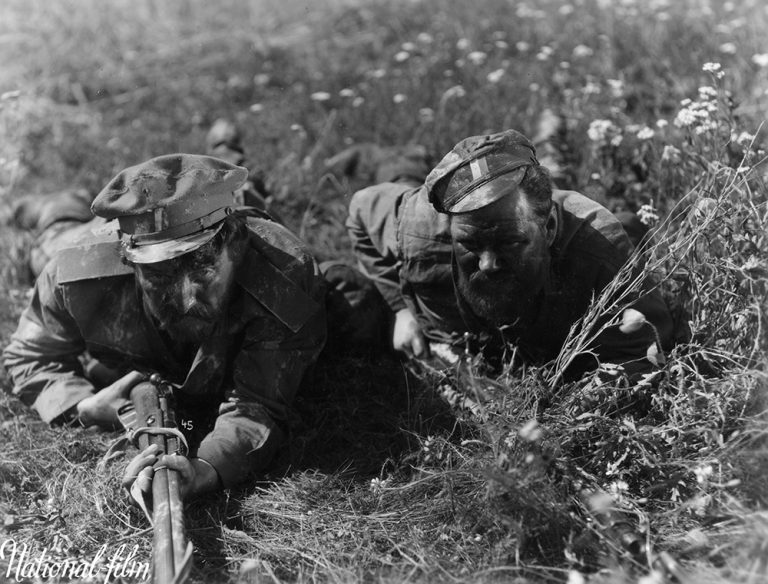