Contexts present Czech films in a broader framework interconnecting texts, videos and other visual material. The introductory article describes production and poetics of each film. A selection of reviews preserved today in the library of the National Film Archive refers to the period critical reception. Promotional materials from the Department of Special Collections reveal the production and distribution strategies of film companies. The visual presentation is complemented by short videos (trailers, interviews, essays).

Few would dispute the assertion that Forman’s debut feature film, Black Peter (Černý Petr, 1963), endorsed by the critics as well as a majority of viewers, contributed to the tradition of Czechoslovak film canon. However, for contemporary scholars, this might pose a certain occupational risk. With a film so critically acclaimed and widely studied, is it even possible to bring something new to the table? Can it be stripped of myths, without having to succumb to autotelic iconoclasm? And to what extent is it suitable to question the established interpretations while avoiding a historical view or blind trend following? In the case of Forman’s film, the answer to all three questions could be found by a general contemplation on what lies behind the celebrated veristic method, and whether its effects reach beyond the illusions of the real, the true or the authentic.

As for Forman’s early work, Black Peter not excluded, we have comfortably nestled them in such traditional categories as “Czechoslovak New Wave” – “verism” – “sociological research of socialist reality”.  Without necessarily having to disparage these labels across the board, a wider outlook from the perspective of European film modernism presents itself. The realistic style of Black Peter, creating a typical illusion of an unrefined depiction of reality, actually does not stem from innocent observation or spontaneous improvisation, but rather from a concrete method of stylization. This approach generally followed two main sources of inspiration – socially engaged (post)neorealism and the observational documentary or cinéma vérité.[1] In Forman’s interpretation, however, it is variously shaded, revealing the heritage of local cultural tradition. Today, carefully mapped stylistic elements of new waves (fragmented observations of everyday life, an open narrative structure, the intensive engagement of non-actors, shooting in a realistic setting, etc.) merge with a grotesque “culture of popular laughter”, refreshing the picture with an original touch; particularly this synthesis characterizes Forman’s work even in the context of period cinematic trends.

The status of a pioneer work of the “comedy of embarrassment”, which became a trademark of the creative trio Forman-Passer-Papoušek, should not overshadow the fact that Forman’s emphasis on shallow folksiness indirectly reflects a grotesque world view, usually connected with the work of the author Jaroslav Hašek. Even though Forman’s farcical comedy compared with Hašek’s caricaturish satire is not altogether the same cup of tea, and Švejk’s witty remarks are nowhere to be found,[2] the affinity between their works is found in their method used to capture the inability to break away from provincialism. For both authors, the comical effect arises from the conflict between pride in a limited value system and the inability to abide by these principles: while Hašek uses this hypocrisy as an effective yet consciously exaggerated survival tool, Forman sees it as a dead-end road. The last scene from Black Peter duly illustrates this issue: the protagonist’s father (Jan Vostrčil), the epitome of a provincial figure of a hearty authoritarian, is giving his son one of many educational lessons, when suddenly he pauses during an expressive gesture, unable to finish his thought. Characters try hard to adjust to the rules of the microcosm in which they live, but as soon as confronted by any change, which extends beyond their limited horizon, they find themselves unable to react quickly, ending up in a vicious circle. This vision, radically different from the universal feeling of alienation found in contemporary works of western European new waves, provides Black Peter, in the context of film modernism, with a specific and distinct gleam.

The strongest means of asserting and embracing a given style of humor is language, specifically the material and spatial quality of speech. A. J. Liehm noted the manner in which Black Peter exercises the method of speech decomposition, considered up to that point to be solely a domain of the theatre of the absurd.[3] The dialogues, which appear to the audience as expressions of genuine sincerity and authenticity, are actually products of well-deliberated wording, with the aim of causing flowing speech to “stutter”, which in turn reveals the eternal absurdity of characters stuck in unchanging mental schemes. The movie revolves around set social rituals with precisely defined rules of conduct (work at the store, family lunch, free time outdoors, dance ball), which by the means of language deconstruction uncover their ridiculous affectation. Protagonists are attempting to abide by the social rules of conduct, or they are guided to do so at least, but they tend to get stuck constantly. A perfect example of this paradox is the famous “Ahój” scene, in which the young man, Čenda (Vladimír Pucholt), repeats a greeting to the point of extreme awkwardness: the protagonist insists on an absurdly exaggerated convention of “correct” greeting to the extent of losing its social function and becoming an object of ridicule. In the case of the father’s pep lectures (rather than talks), the grotesque lowering of official social rules progresses into an almost ideologically subversive role. The chaotic and disjointed flow of words, used by the patriarch Vostrčil to preach to the silent Peter about man’s duties, unwittingly reveals that his position of authority rests on a shaky and uncertain foundation – and as shown in the final stop-shot, such a foundation can collapse in a heap at any time.

The grotesque use of speech would not, however, be as effective, if it were not marked by the hard-earned achievements of modernist cinematography (its naturalist variant) and the European new-wave movement. Forman’s (respectively Passer’s and Papoušek’s) language humor bases its effectiveness on the impression that it is taking place in a live, open and physically pulsating reality, paradoxically facilitated by an aptly selected stylistic manipulation. Pucholt’s acting would not have had such a comical impact if it were not for his impetuous lecturing being accompanied by clumsy gestures amid a mise-en-place dance whirl, just as Vostrčil’s performance is unimaginable without his circular locomotion around the confined kitchen and his constant stretching of suspenders. The modernist and grotesque perspectives need each other, “one will not let the other suffer”,[4] as Jiří Kolář would remark, and Forman’s creative activities have been drawing their meaning from this marriage for more than five decades.

[1] In the first case, there is a palpable influence by the Italian film director and screenwriter Ermanno Olmi (Il Posto [The Job, 1961]), while in the second case one might refer to the ethnographically or sociologically focused work of French director Jean Rouch. András Bálint Kovács, Screening Modernism: European Art Cinema, 1950–1980. Chicago and London: University of Chicago Press 2007, p. 168.

“In Black Peter, Forman for the first time gave his distinct trademarks a synthetic form and managed to not only unite them in a simple and appealing film, but also create – despite bursts of laughter – an atmosphere of kindness which was missing in Audition (Konkurs, 1963). Black Peter shows not only the authenticity of its setting, but also the authenticity of seeing a human being as a mixture of good and evil, humour and tragicality, foolishness and reason, luck and failure, chance and intention. The shop apprentice is not just a teenage boy who watches the buyers, he’s a non-heroic anti-hero caught in a certain phase of his transformation into himself in a blend of comedy and sadness whose common denominator is truthfulness.”

“The weakest link of the Black Peter chain is Peter himself. In him, I think we can see the limitedness of Forman’s directorial method. The film revolves around Peter, but Peter plays the smallest part. (...) In his direction, Forman focused on places where he felt stronger and more accurately formed motives and where the performer logically could be presented more naturally. It is almost a rule that climactic scenes of Peter’s encounters with the world are reflected more clearly in the reactions of his partners than in the main character himself. (…) The unclear portrayal of Peter and the lack of balance of the film is a result of collision of the method with the will and the need of the author. And in this sense, Black Peter is a limit point not only for Forman, but also for his peers. It indicates the limits of the method and shows the point to which you can be led by it and the point where you need to abandon it.”

“Miloš Forman’s cynicism isn’t a cynicism against the truth and is therefore much more effective, accurate and naturally also more inspired in its observation. Unlike Chytilová, Forman isn’t an eclecticist.  Unlike her, he held on to the kind of humour which is mean, dangerous, hidden and explosive. He let himself do something which should never be forgotten if he finds a way into a more acceptable climate: he struck the small Czech man. He aimed at cowardice, dullness, footbalism, brutality, acquisitiveness, good-hearted emptiness, householdery, beer culture, selfishness and hit bullseye: he hit exactly those centres of intellectual pitifulness that are the source of basically every kind of Fascism and Stalinism. His approach was so ruthlessly accurate that the caricature stopped being a caricature.” 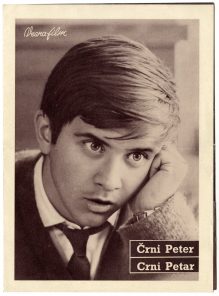