Similarly to Fritz Lang’s crime thriller M (M – Eine Stadt sucht einen Mörder, 1931), René Clair’s comedy Under the Roofs of Paris (Sous les toits de Paris, 1930), and Alfred Hitchcock’s sound version of Blackmail (1929), for Gustav Machatý it was not enough to employ sounds only for the sake of them in his first sound film, and he started experimenting. In the resulting avant-garde melodrama From Saturday to Sunday (Ze soboty na neděli), a simple story is fully subordinate to the creative work with sounds and a convincingly captured atmosphere of a city at night.

Stenotypists Nany (Jiřina Šejbalová, her sound film debut) and Máňa (Magda Maděrová who was not an actress)[1] are friends and colleagues. One day, they accept a dinner invitation from Ervín, a rich factory owner. During the dinner, Ervín tries to win over Máňa with a thousand-crown banknote – first he urges her to take it, then he secretly puts it in her purse. But Máňa runs away from the luxurious factory into the rainy streets of Prague and finds shelter in an out-of-the-way night pub where she meets Karel (L. H. Struna), a kind-hearted typesetter. They are a perfect fit for each other and spend the night together. The next day, though, Máňa finds the banknote in her pocket and Karel concludes that his lover is a prostitute. The disgraced girl reacts with melodramatic exaggeration – she tries to poison herself with town gas. Karel only saves her last minute.

The newspaper advertisements for Machatý’s film focused mainly on his collaboration with writer Vítězslav Nezval, who wrote its libretto.[2] The first version, called Lust, cowritten by Nezval and Machatý, was ready in summer 1929. The première was planned for autumn. At the same time, the film industry magazines informed that new sound equipment would be installed in the AB studios in Vinohrady, Prague.[3] The Tobis-Klangfilm sound system was delayed, though, which was one of the reasons shooting was postponed. Moreover, the young (28-year-old) overworked director collapsed, and it turned out that he had been planning to shoot another film in London within the same time frame. The shooting in England was cancelled, though, and Machatý started to procure the budget, which was much higher than for a silent film because he had to rent sound studios and equipment.

The investors were sceptical about getting a return on their investments. It was much more secure to invest into American films popular with audiences than into a Czech sound film that might have been difficult to sell abroad. Machatý was turned down even by German entrepreneurs. Only in autumn 1930 did he manage to convince František Horký, owner of the production and distribution company Gong-film, to collaborate with him. The second and still not final version of the script, this time also co-written by Horký, was called Saturday (other working titles were: Around Good Luck, The Night when Desires Come True, and A Night of Coming True). The original story covering several weeks was condensed into one night. The insight into Karel’s parents’ life and his wedding with Marie were dropped. The characters that embody clearly defined sorts in the film were also simplified, which made it easier for Machatý to cast suitable actors.

Horký’s contribution was not enough, though, so the script was offered to the strongest film production company in the country – AB. Machatý and Horký made it a condition that they would direct and produce the film themselves. Machatý was allowed to direct the film, provided that the script would be complete before 20 February 1931, the shooting would start immediately after that, and the film would be ready by the end of March. The budget was 1.15 million crowns; Machatý’s share of the profits was supposed to be paid to him only after production costs were settled. Since the installation of the new sound equipment in Vinohrady was almost ready, the shooting started in late February.

For the sound engineer Josef Zora, one of the most significant Czech sound masters, From Saturday to Sunday was one of the first big orders. It was also the first film opportunity for Alexander Hackenschmied, an avant-garde artist who most likely influenced not only the architecture in the film but also the camera work and the montage (see his poetic short-film Aimless Walk – Bezúčelná procházka, 1930). Last but not least, the film was the very first significant experience for Jaroslav Ježek, a composer from Devětsil, an association of Czech avant-garde artists; Ježek’s jazz soundtrack with songs written by Nezval and more or less skilfully included into the story (Teď ještě ne, Slovník lásky) was issued by Ultraphon.[4] Cameraman Václav Vích, one of the pioneers of the Czech camera masters, already had worked on several films.

The film was screened for the five-member censorship committee already on 24 April 1931. Less than a month later, the film was approved. It was rated 16+ only. But the request for the film to be declared “culturally educational” (and hence exempted from the entertainment fee) was repeatedly rejected by representatives of the Ministry of Education and National Enlightenment due to “the content and the overall execution”, and the censorship committee respected the opinion. Machatý and Horký therefore had only one hope: that the invested money would pay off thanks to ticket sales.

The première took place in the Prague cinemas Fénix and Lucerna on 1 May 1931, and From Saturday to Sunday played in each for two weeks. One of the first reviews was by Otakar Štorch-Marien in Rozpravy Aventina (Aventinum Revue). According to him, the librettist and director “were not able to achieve a unified storyline and scenic course.” He also considered the exposition “lengthy and detailed (while being the best part of the film), yet the second half of the film is too fragmented (…) and does not keep up with the initial rhythm and quality.”[5] Quido E. Kujal reviewed the film for Český filmový zpravodaj (Czech Film News): “While there is a promising artistic beginning, lasting till the dramatic crisis, the story compromise spoils it by nothing but disproving what Machatý has been underlining from the very beginning – the realistic note!” Kujal’s review also talks about the delicacy of the motif of non-binding love affairs, further explored by Machatý both in his previous and next films: Eroticon (Erotikon, 1929) and Ecstasy (Extase, 1932): “Machatý can craftily work with the delicate form and often stops only right on the line behind which the Censor waits with his huge scissors!”[6]

Many reviews helped with Machatý’s portrait of a cosmopolitan film-maker enriching the domestic film industry with influences from more mature countries. Karel Hašler saw his inspiration in the East: “Machatý has learnt a lot from Russians and added his own opinion on what a film should look like. He created a masterpiece beyond the stereotypical film. He puts emphasis on movement, light, and all layers of life. His film is avant-garde, but not to the extent that it would not be accessible for all classes.”[7] According to an anonymous review in Lidové noviny (People’s Newspapers), “Nezval deliberately decided for a calendar form, inspired by Chaplin, who also takes the most banal stories and creates something valuable from them.”[8] And the readers of Filmové listy (Film Newspapers) were informed that Machatý “learnt how to work with camera movements from Americans” while “in the many details we can see Soviet and modern French influences.”[9]

According to the critics, the quality of Machatý’s work was comparable with that of the overall European film industry thanks to his education and ability to bring young talents together, as had already been mentioned in reviews for Eroticon. The “top world quality” of his film and its ability to attract even foreign audiences have been proven by the fact that a French version was created in early 1932. Titled D’une nuit a l’autre, the film was praised both by audiences and critics in the media. Apart from in France, the city melodrama was also sold in Switzerland, Belgium, and Spain.

Many critics of the era did not like the banality and sentimentality of Nezval’s libretto. But it was thanks to its simplicity that Machatý could concentrate even more on the visual style and unconventional approach to sound.[10] The film includes several causally linked episodes, defined mostly by the environment. Both the film’s beginning and end take place in an office where Nany and Máňa take dictation, which is the exact definition of “circle script editing”; this can also be seen in some other scenes (e.g. the one in the church both starts and ends with door opening). The other sequences take place in a restaurant, in the street, in a pub, in a church, and in Karel’s flat. Each environment is differentiated from the others with the sound design consisting of diegetic sounds and non-diegetic music.

The contrast between the fancy place where Ervín invites the girls and the dive where Máňa meets Karel is highlighted even before we can clearly see it, thanks to the sounds (Machatý often opens his scenes with a detail and only then works up to the whole frame), which enhance the dynamics of the narrative. The soundtrack also helps with the realistic effect, with space orientation (the scene in which Máňa and Karel are lost in the dark), and with the portrayal of individual characters and their social status (the slang terms of the working class). In other scenes, for example in the very first one where typewriters click and clack, the sound joins the rhythm of the editing and the foley effects make the atmosphere (of the mechanical nature of the office work) complete.

The sound is also thematised by the story. The equipment for sound recording and transmission (phonograph, telephone, radio, headphones) enter the characters’ lives as exotic elements which, on the one hand, provide a distraction from the monotonous everydayness (Nany arranges the meeting with Ervín on the phone which, as Petr Szczepanik said, “represents the possibility of escape, the freedom in a city full of new opportunities and brief contacts across the social spheres)”,[11] but on the other hand, invade their intimacy and make it impossible to enjoy one’s quiet moments (the radio in Karel’s apartment which turns on completely on its own). The film suggests that the modern forms of communication disrupt interpersonal relationships and encourage insincerity (Máňa puts down headphones from which a male voice can still be heard; the exercising instructions broadcast by the radio are read by an obese man sprawled out on an armchair).[12]

Machatý’s ambitious melodrama was a successful attempt to follow modern trends in the global film industry. Unlike other early sound films, his did not use sounds only for dialogue and music – smash hits which would be then issued in collaboration with recording companies. His sounds helped create the fictional world and encouraged the audience to contemplate the relationship between what we hear and what we see. In the Czech context, Machatý is a unique example of a silent film director who managed to approach the new technologies in a creative, unselfconscious and on-top-of-things way and who shot a film which seems modern even ninety years later.

[1] After the war, she was cast in several episode roles, e.g. in Darbujan and Pandrhola (Dařbuján a Pandrhola, 1959) and the musical comedy Two Men from Another World (Dva z onoho světa, 1962).

[3] The sound insulation was never very good in the AB sound studious but since the company had the monopoly over sound films, the film-makers had no choice.

[10] For example: “The new film by Nezval is nothing but a poor calendar story made fancier by the director thanks to several funny ideas and the original camerawork. The camerawork is the best thing in the film.” -OR-, Nové zklamání z českého filmu (New Disappointment with a Czech film). Večer 1931, May 4, p. 5.

[12] There is also the dissonance between the picture and the sound in the restaurant scene in which we hear voices but cannot see the people. The picture tells us something different than the sound. 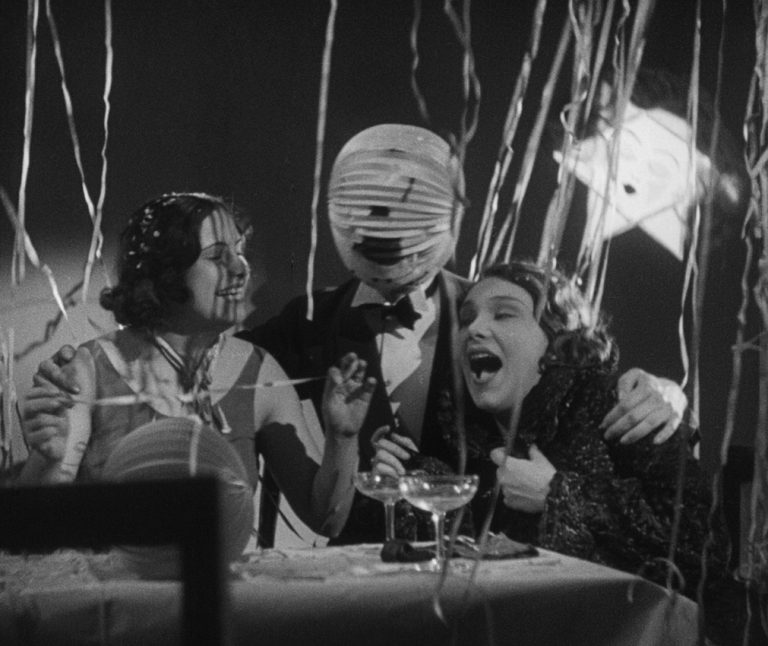