Lichožrouti is a gangster adventure film

After several years of intense work the Czech animation scene can finally enjoy the premiere of the feature film Lichožrouti (The Oddsockeaters), seemingly the most anticipated animated film of the year. The “licháči”, as their authors call them, won fans all over the world with their bestselling book by Lichožrouti. And the film adaptation has similar great ambitions.

We bring an interview with the director, artist, and screenplay co-author Galina Miklínová and with Petr Horák, head of the Alkay Animation Prague animation studio and a coproducer of the film.

Who came up with the idea of filming Lichožrouti (The Oddsockeaters)?

Galina Miklínová: The idea, or rather the impulse, came from our friend, the publisher Láďa Horáček, who had published Lichožrouti. Once we took a trip together to Litomyšl and he said why I don’t just make a film out of it, when I myself make animated films. The book soon became highly successful, so the possibility has been considered since practically the first part. Pavel Šrut and I even talked about animating Lichožrouti a few times. Láďa took me to see producer Ondřej Trojan, whom we know through Petr Šabach, and he took 14 days to think it over. Then he called to say he was going for it. It was still going smoothly. Later it was much more complicated, a giant project like this requires a lot of work, which with all due respect no one can even imagine. I joined a partnership with Petr Horák’s studio, Alkay Animation Prague, whom I’ve been working with for years, and T.H.A. looked for funds for production.

Why did you choose 3D computer animation? Weren’t you afraid that the original 2D illustrations would lose their charm with the transition to 3D?

Galina Miklínová: Quite the contrary. Lichožrouti is very good material for a 3D animated film. CGI technologies allow a child viewer to better grasp the world we’ve created. The choice of computer animation was a logical outcome. In one of two main planes of action the film focuses on the question of the existence of the Lichožrouti as a species. And it was the CGI animation that allows us to retain the delicate balance between believability and fiction in a realistic way and to use it effectively for the physical character of the Lichožrouti, who are not flesh and blood – after all, they subsist off of socks, so we had to create textile materials for them. CGI programs allow figures to stretch, fade out, twist around…

So you wanted to be distinct from the illustrations in the book?

The book is a book and the film is a film. If we had used the method of 2D drawing, Lichožrouti would never be a mainstream film and we would probably have a hard time getting money for it. And I also wanted to try something new.

Petr Horák: Compared to our studio’s previous projects we had to set the technical and qualitative bar a bit higher, because it required an artistic intent for the film. We knew we couldn’t make a film under Czech conditions the way an American animation studio would, but we didn’t want to create some sub-average “plastic” CGI film.

Did you have to change the story a lot for film?

Galina Miklínová: Oh yes. As early as the story breaking phase. The book is very literary right in the first part and it was hard to find the key for transposing the literature into film and retain the essence that Pavel Šrut and I created in the lichožrout world. I believe that the poetry of the lichožrout world of the film was not completely lost. At the same time, it’s a film and it has a different function for viewers than a book does for readers. So we had to create a large-scale action spectacle, which came naturally as early as the story development stage. I wanted to distinguish us from Czech fairytale animated feature films and create a compact, suspenseful, but in its own way touchingly comic story of a small lichožrout in the big world.

What sparked the interest of Alkay Animation Prague in becoming a coproducer of the film?

Petr Horák: I believe that the film has the potential to become commercially successful abroad as well, and for this reason I consider coproduction a good investment that will definitely pay off in the future.

Galina Miklínová: I’ve been working with Petr for years and I like working with him. I think he understands my artistic handwriting and always tries to accommodate it technically. What’s more, Lichožrouti is the dream of any animated film studio, so there was no question.

How were you able to get other coproducers? When and why did a Croatian coproducer enter the project?

Petr Horák: The Croatian coproducer Arsen Anton Ostojić and his family have been my friends for a long time, I’ve spent my summers with them for years on the island of Brač, where Arsen’s parents are from. During long summer evenings spent sitting in a local konoba, and trips together on small fishing punts we talked a lot about our common partnership and the building of a conceptual bridge of film friendship and collaboration between Prague and Zagreb. And so when Arsen saw the first clips of Lichožrouti and realized that a book by the same name had already been published in Croatian, he expressed interest in coproducing the film and nominated the film for a Croatian grant we eventually received.

Galina Miklínová: We waited for the grant from Croatia for a long time but it finally came, albeit at the last minute. Ondřej Trojan gained Slovak coproduction.

How hard was the execution, both in terms of producing and directing?

Petr Horák: The hardest thing was to come up with the technical approach that would allow a small team to uphold the artistic and cinematic quality that we had established at the beginning, at the level of a feature film. Then to build a team and keep it in Czechia, not exactly a promising environment for an animated film at full capacity for a period of five years.

Galina Miklínová: For me as the co-author of the screenplay, the creator of the artistic format, and the director, the hardest problem aside from the range of individual problems was to keep the project at the standard for quality we set. To continually come back to it, correct it, wait, work it over, stay motivated, accept feedback, give it… and so forth. And as a producer I had to be far more engaged than usual, because for T.H.A. it was the first 3D feature film so it was just as fresh a debut in this field as mine.

How long did it all take (from beginning preparations to premiere)?

Altogether it took seven years. In February 2009 the first work on the story began. This basis underwent numerous changes, then 10 versions of the script were created, while artistic and technical tests were developed in parallel. Then we worked on the animation, which took two years. Then there was modeling, layout, texturing, rigging, testing the simulations, animation, lighting, rendering, compositing, post-production

Petr Horák: …and the production of the screen format from the delivery of the screenplay and artistic designs to the premiere took about 3.5 years.

Galina Miklínová: Lichožrouti had a very subtle team, maybe 25 people, which gave me a real nightmare from the beginning, but to my surprise and excitement I have to say that the team around Petr Horák at the Alkay Animation Prague studio have done an amazing job. For example, there were only three texturists who drew the entire film by hand. The modelers, too. There were ten animators, and I could keep going like this across all professions.

Petr Horák: Yes, there were other professionals working on the film besides the animators. Storyboardists, modelers, texturists, programmers, riggers, lighters, compositors, programmers, and more.

Galina Miklínová: It also worked that many of them can do multiple positions at once, or were upskilling, and the team “spilled over” when needed.

Did international distributors express interest in the film?

Galina Miklínová: The producer has big plans for a film, so yes, there will be an English copy, I have developed Spanish subtitles with the Czech Centre in Madrid and of course coproduction copies will be made as well. Given that the phenomenon of “licháči” is already in place in the world… and was, even before the film was undertaken – before then it had been published in twenty countries throughout the world in fifteen languages – a producer has a much easier situation.

What age group is the film intended for?

Galina Miklínová: If a boundary has to be set, then it would be 6+. It’s a gangster adventure. But I believe that every viewer will find his own way. The books about the oddsockeaters are loved by young and old alike, and I like the idea that we could do the same in film.

Are you planning to shoot other episodes as well?

Galina Miklínová: I think we won’t right after the first episode. For another adventure like this I would need to have some distance. A good bit of it. At this moment I’m considering other material, but that would be more of an art film for adults, so the complete opposite. But never say never. That’s the most exciting way.

Petr Horák: I deeply hope we will be filming more episodes in the future. 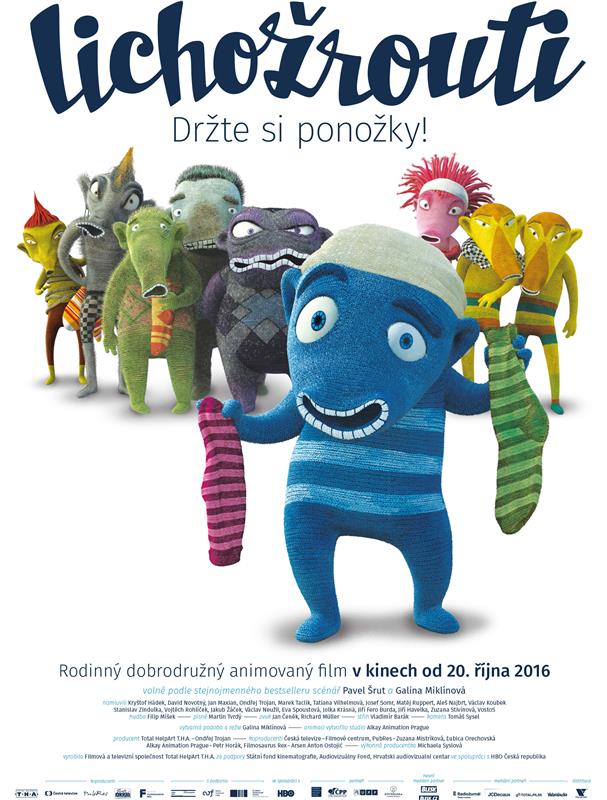