When Věra Chytilová asked Jan Němec in her documentary Searching for Ester (Pátrání po Ester, 2005) about the film Killing the Devil (Vražda ing. Čerta, 1970), the director of films such as the Flames of Royal Love (V žáru královské lásky, 1990) and Code Name: Ruby (Jméno kódu: Rubín, 1996) didn’t mince his words: “I know of no stupider film than Killing the Devil, and I am very ashamed that I worked on its script and was an extra in the film.”

Němec’s contemptuous attitude towards the directorial debut of scenographer, dramaturge, graphic artist, costume designer, writer, screenwriter and director Ester Krumbachová is surprising for multiple reasons. One of them noted by Němec himself – he was the co-author of the film’s literary script. It was created as an adaptation of a radio play based on a story by Krumbachová (published in the autumn of 1968 in the magazine Plamen). After she and Němec adapted the play into a script and got paid, he saw the matter as closed. He didn’t expect it to be made into a film. But Krumbachová, who worked on such films as Diamonds of the Night (Démanty noci, 1964), A Report on the Party and the Guests (O slavnosti a hostech, 1968), Daisies (Sedmikrásky, 1966), All My Compatriots (Všichni dobří rodáci, 1968) and the Firemen’s Ball (Hoří, má panenko, 1967), was determined to finish the project. She took the post of director herself and, according to recollections of actors and a report from the shoot, commanded the set like an experienced filmmaker: “It seemed as if she had been a director all her life. She didn’t look like a beginner at all.”[1]

Němec’s hostility towards the film is astonishing also because even though he himself was inclined to making formal experiments and rarely succumbed to the conventions of classical narration, he couldn’t appreciate the playful non-film Killing the Devil. And he wasn’t alone. The reviewers didn’t conceal their disappointment. According to them, this “fairy-tale comedy”, as the film was advertised, suffered from a repetitive structure, zero pace and a generally bad composition of individual elements. In their eyes, Krumbachová didn’t live up to the great expectations they placed on her.

The biting feminist satire with motifs from folk stories doesn’t fulfil expectations of comedy either. Casting Jiřina Bohdalová and Vladimír Menšík to play the main roles probably helped to push the film through to production in the tense atmosphere after the 1968 Warsaw Pact invasion of Czechoslovakia. But rather than the Czech Television’s unified New Year’s variety shows in which Bohdalová and Menšík later entertained the ‘normalized’ society, Ester Krumbachová’s first and last film resembles avant-garde film and theatre of the previous decades, or multimedia projects such as Laterna magika. Alienating devices borrowed from other media draw attention to the artificiality of the fictional world and break up the narrative into fragments. Narration of a consistent story and simple entertainment of viewers is not a priority.

The numerosity of resources fuelling the poetics of the film proves that Krumbachová was justly characterised as a renaissance artist. She was well versed in literature, the fine arts and philosophy (one of the dialogues in the film mocks Nietzsche and Freud, two misogynist thinkers who did a disservice to the emancipation of women). She tailored dresses, made jewellery for the actors, designed furniture and prepared delicious meals forming an important part of the story – during the shooting, Vladimír Menšík joyfully acknowledged: “You know, I don’t mind the women in the film at all, I only receive various food from their hands and, pardon me, just pig out…”[2] When working on her previous films, Krumbachová could only use a fraction of her various talents, but Killing the Devil represents a dense concentrate of what fascinated her and what she was good at. The slightest details were therefore of great consequence to her. Her creative control over every prop, costume and decoration was unique. Although the film was an adaptation of a radio play, its dialogues are full of empty words and trans-textual references to legends and fairy-tales that bear no primary meanings; the characters rarely utter a sensible word. They emphasize the rhythm of the narration and dilute the number of inputs offered by the elaborate Mise-en-scène with touches of Art Nouveau and occultism, contrasting colourful surfaces and an accurate object layout.

In every seemingly static shot, Krumbachová spins a dynamic carousel of colours and shapes and serves a feast to our eyes – not unlike the feast that the main protagonist (Jiřina Bohdalová) lovingly prepared for her guest Bohouš Čert (‘čert’ meaning ‘devil’ in Czech) (Vladimír Menšík). Both characters provide a vivid picture of certain archetypes of their gender (devil, witch), but in the way they want to satisfy their needs, they are also very earthly and human. They live to flirt and feast. Food is the most effective means of communication in their series of meetings, which form the entire plot of the short film. They reach an agreement in their dialogues only rarely. Each talks as if the other one isn’t there, and every other statement negates the previous one. Until the woman starts to seduce him with e.g. “homemade pâté with almonds”, Čert doesn’t even listen to her. In one scene, he even pretends to be deaf, but miraculously regains his hearing when his hostess starts talking about another course she is preparing. The woman saw the visit of her old friend as an opportunity to be freed from her tedious and lonely life, but Čert merely frees her from all her food. During one of his visits full of slurping, chomping and crunching, he eats a huge serving of duck with dumplings and cabbage – the preparation of which was shot in an almost erotic manner – and afterwards continues with plates and plants. The extreme display of his insatiable appetite is an act that forces the increasingly desperate hostess to ask him, “Did you scoff the furniture legs?”

Čert excuses his pathologic gluttony by his male nature. He is a man and therefore must eat to maintain his strength. But he uses the energy gained by eating enormous amounts of food only to continue feeding himself. His only purpose is to consume. Even if he were to destroy the world attentively cared for by the woman. But the fuller he gets, the emptier their relationship is, and the less he can please or surprise.

“I am far more interested in men than women. They are much more dangerous. Their aggressive sexuality often defies love. And eventually results in wars.”[3] (Ester Krumbachová)

The world into which he creeps, does not belong to the man, but he usurps it for himself the very moment he enters the apartment and instead of greeting says, “I hope we will eat right away.” The hostess gradually turns into a guest, and the pillager refuses to take responsibility for the damage done. He doesn’t have to. The woman is pleased that he likes the food and forgives him again and again, believing that he will eventually marry her.

The ambitionless heroine has no opinion of her own and accepts the rules imposed by the man. Perhaps it is because her romantic ideals that are, however, far from being fulfilled. She repeatedly lets the man intrude in her privacy and keeps him away only from the fridge that represents a version of her thirteenth chamber in the stylised microcosmos of the film. With her effort to turn into an image of flawless womanhood, the heroine inadvertently upholds a model that benefits only one gender. Her submissiveness and passivity, that Krumbachová wanted to address in her film, only strengthens the patriarchy.

Only at the film’s ending, which turns the Faustian myth inside out, does the woman prefer her own personal freedom to love. Thanks to her interactions with Čert, she learned how to utilise parodically amplified female features (provocativeness, boosting the male ego, pretended ignorance) to her benefit. In the end, she doesn’t use the clichés associated with women to please the man, but rather to subjugate him. With the help of her secret, which is ironically a bag of raisins, she eventually gains the upper hand and defends her territory.

But it is only an imaginary victory. The woman overcomes the devil with his own weapons. She starts thinking as exploitatively and egoistically as he. The film ends with her informing us that she plans to go to Tibet. It’s a reference to a Tibetan saying quoted at the beginning: “An eaten man is better than no man.” One battle is over, but the war of the sexes rages on.

Looking aside from the gender level of the narration, the series of absurdly exaggerated female and male actions and reactions can, just like other films made after the 1968 invasion (the Cremator, Uninvited Guest), be perceived as a general testimony to conformity and the willingness to sacrifice one’s own comfort and accept a non-standard essence of an individual threating the situation as natural.

“The film was premiered on 18 September 1970 and it seems it was screened in cinemas without any difficulties,” writes Štěpán Hulík about the film in his book exploring normalisation-era cinema.[4] But he subsequently adds that Ester Krumbachová’s creative opportunities were gradually limited, and she returned to film after 10 years in 1983 as a co-author of the script for the Very Late Afternoon of a Faun (Faunovo velmi pozdní odpoledne, 1983) by Věra Chytilová.

This provocative parable playfully elaborating on the saying “the way to a man’s heart is through his stomach” concluded not only new wave, but also the directorial filmography of Ester Krumbachová, who was, along with Věra Chytilová, one of the most daring personalities of Czech cinema. Her contribution to Czech cinema still hasn’t been fully appreciated. 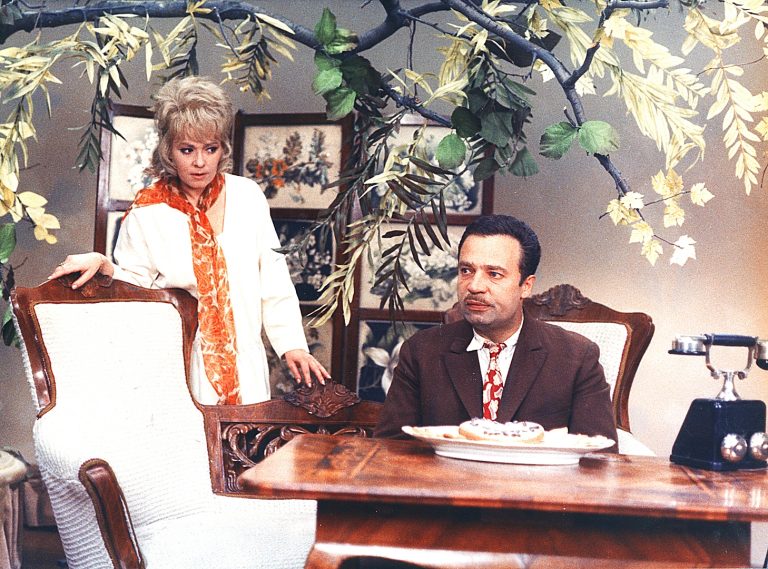