Pearls of the Deep (Perličky na dně), an anthology film made in the mid-sixties by the new generation of Czechoslovak filmmakers, was received as a manifesto of the Czechoslovak New Wave. But it is rather a testimony to the diversity of individual filmmakers. Authors associated with this anthology film share, in particular, an admiration of Bohumil Hrabal. But the visual and interpretative motifs each chose when filming individual segments are strikingly different.

Hrabal’s book Pearls of the Deep was published in 1963. It was followed up by Palaverers (Pábitelé). Both books include tragicomic stories from ordinary lives dominated by authentically sounding direct speech, simple storytelling, and gentle humour. In most cases, Hrabal was inspired by specific people and places. Some of them, for instance graphic artist Vladimír Boudník and the publican Mrs. Laštovková, can be seen in the film.

Hrabal’s stories aren’t dramatic. Their core lies within thoughtful and attentive portrayals of certain environments and distinct personalities. They are enlivened mostly by the colourful colloquial language. Young graduates of the Film and TV School of the Academy of Performing Arts in Prague had to face the challenge of finding adequate film language equivalents to match the rich storytelling style, combining a feeling for language with a marked literary stylisation.

Individual short films were made separately – the filmmakers didn’t see what the others were doing. In a similar manner, Hrabal prepared literary scripts of individual stories with each of the filmmakers separately (they subsequently wrote shooting scripts themselves). There are, however, two unifying elements – Jaroslav Kučera’s cinematography and Hrabal’s cameos in each segment.

The film begins with The Death of Mr. Balthazar (Smrt pana Baltazara) by Jiří Menzel. This adaptation of a plotless mosaic story, The Death of Mr Baltisberger, captures the atmosphere of motorcycle races interposed with individual portraits of selected spectators. More than by the race itself, some spectators are fascinated by accidents, one of which is fatal.

Menzel, just like in his later Hrabal adaptations (he already had his script to Closely Watched Trains ready), interposes morbid motifs with lyrical scenes, in this case accompanied by original music by Jiří Šust and a borrowed composition named Poustevník (Hermit) by Bedřich Nikodém. Menzel himself played a cyclist in one scene.

Jan Němec filmed Impostors (Podvodníci), a sad 10-minute-long anecdote about two old men in a care home reminiscing about their youth and careers. One was an opera singer and the other a journalist. And just like in Hrabal’s writing, the story revolves around the non-dramatic dialogue of two people, or rather two alternating monologues.

Arguably the rawest story from the Pearls takes an ironic as well as a compassionate look at people’s last moments. Němec abandoned lyrical and surrealist elements known from his feature films and instead used a detached view present mainly in anecdotes that the men tell each other. The final revelation then expands the film’s thematic focus and helps to interpret its name. The closer we are to our own death, the more we strive for something to compensate our life’s losses. The static Impostors, taking place in a near-death atmosphere, is a sharp contrast to the dynamic House of Joy (Dům radosti), full of life. Evald Schorm made the adaptation of the story Bambini di Praga 1947 as the only contribution to the anthology filmed in colour. He found a fitting location for a story of a grotesque encounter between two worlds in a settlement called America, near Unhošť. Two insurance agents visit the house of a naïve painter named Nulíček, portrayed by real painter Václav Žák, who inspired Hrabal’s story. Through the personality of the painter, Schorm could elaborate “his” principal theme exploring the relations between artistic work and personal life. This segment starring predominantly non-professional actors combines various personality types and film styles. A report meets with a fairy-tale, real environment meets with a fantastic artistic stylisation mirroring the “work” and the “palaver” nature of the main protagonist.

In At the World Cafeteria (Automat svět), Věra Chytilová suggestively evokes the atmosphere of a bistro on the periphery of Prague. One of the story’s main protagonists is Vladimír Boudník, the founder of explosionalism. In this poetic depiction of a tragic follow-up to a wedding night, Hrabal’s long-time friend played himself. The film’s closing balladlike scene paraphrasing Erben’s poem The Wedding Shirts (Svatební košile), in which a young man rips the bride’s veil in rain and storm, was improvised on the spot during filming.

At the World Cafeteria is among the most artistically expressive segments of Pearls of the Deep, and with its dream-like logic, narration without strict causality, associative editing and spontaneous imagination, it foreshadows in particular Daisies (Sedmikrásky, 1966), which Chytilová made a year later, and also resonates with Hrabal thanks to its polyphonous narration mixing voices and stories of several characters. The last segment of Pearls of the Deep is Romance (Romance). Hrabal’s “storiest story” was chosen by director Jaromil Jireš because of its linear construction and roughness. After his formally complex debut The Cry (Křik) from 1963, Jireš wanted to make a simple story based on the relations between its characters. In Romance, we explore the relationship between a plumber named Gaston (Ivan Vyskočil) and a spirited Roma girl (non-professional actress Dana Valtová).

This realistic character study of two young lovers from different social and cultural backgrounds, bearing witness to the situation in Czechoslovak society is based on Hrabal’s memories of his own romance. The non-experimental and non-sentimental story won the Grand Prize at the Oberhausen Festival. The whole pentaptych (due to the running length, Ivan Passer’s A Boring Afternoon (Fádní odpoledne, 1964) and Juraj Herz’s The Junk Shop (Sběrné surovnosti, 1965) had to be omitted) won the FIPRESCI Award and the Youth Jury Special Award at the 1965 Locarno Film Festival.

Czechoslovak State Film waited until January 1966 to distribute the film. It was labelled as a film for demanding audiences, and reviewers expressed doubts whether it was too demanding for a general audience. Similar concerns revealing that recognition abroad did not guarantee a ready embrace by domestic audiences were also expressed in an annotation in Filmový přehled: “From the point of view of the audience, Pearls of the Deep is definitely not an easy film. It demands – and even more so than other films by our youngest directors – a certain level of cooperation from the audience. It is meant exclusively for advanced viewers.” 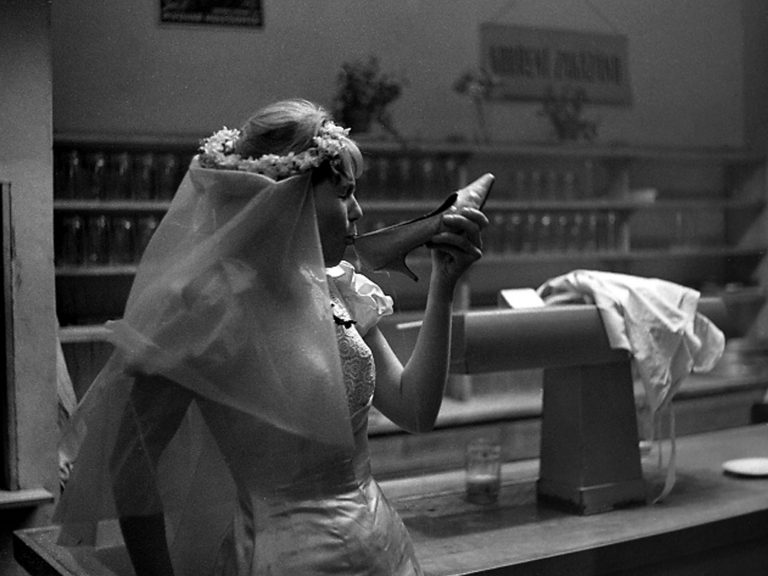