Director Tomáš Vorel debuted in 1988 with a film composed of multiple stories closely related to the theatrical work of five ensembles. There was most certainly a wry “conspiracy of connections” between the members of the artistic generation who contributed to this film: Vorel himself had acted as an author, director and actor for two of the ensembles – Pantomime Group Mimóza and Theatre Sklep. Lumír Tuček, frontman of Reciting Group Vpřed, had collaborated with Vorel in the making of the latter’s “full-blooded” feature-length debut: generational cult musical comedy, or “rhythmical”, Kouř (Smoke, 1990). But prior to Kouř, Pražská 5 (The Prague Five) had, of course, already convincingly demonstrated the potential of its creators, brought together not so much by their similar ages but rather by the more liberalised atmosphere of the late 1980s. It was this that enabled artists of various talents to bring their work to the public. Prague’s Barrandov film studios, meanwhile, had fallen in with the more liberal stance, making it possible to create a film targeting the various taboos, limitations and delicate subjects of the period. The five pieces that make up Pražská 5 are interconnected by Milan Šteindler, who, in the role of a learned tutor, parodies matters with dry “scientific” comments. The film segment Směr Karlštejn (Direction: Karlštejn), made according to a script written by Vorel together with David Vávra, a colleague from Mimóza, tells the story of a family from Prague on a trip to the countryside. The family is completely out of tune with mother nature, which is represented by Vorel’s emblematic imp. Oldův večírek (Olda’s Party), made by Reciting Group Vpřed to a script by Lumír Tuček, is the story of a naïve handyman on a doomed quest for some sort of valve seal. He encounters nothing but ignorance, derision and cynicism. True-to-style musical tale Na brigádě (Summer Job), devised by members of Theatre Sklep, is an affectionately malevolent parody of 1950s odes to the socialist “builders of a better future”. The documentary value of Pražská pětka remains indisputable, yet viewed through today’s lens the piece made by Creative Theatre Kolotoč (a stylised performance about human life, Bersidejsi (Take-and-Enjoy) and the segment from Ballet Unit Křeč (Michal Cabana’s choreographed orgy on the theme of totalitarianism, entitled Barvy [Colours]) leave a little to be desired.

The instructor, doctor Milan Šteindler, CSc. – with his hair smarmed and in a very formal way – introduces five film performances by young avant-garde theatres: the pantomime group Mimoza, the art art theatre Kolotoč, the elocutionary group Vpřed, the ballet unit Křeč and the theatre Sklep. The vase in front of the instructor contains five red carnations which wither one by one. The film guide's condition withers, too, his expression loses continuity and he must keep peeping into his notes. Before introducing the last story, he is noticeably worse for drink and dishevelled and even stutters. As soon as he recalls the 1950s, his eyes fill with tears. When the program ends, he falls sound asleep. 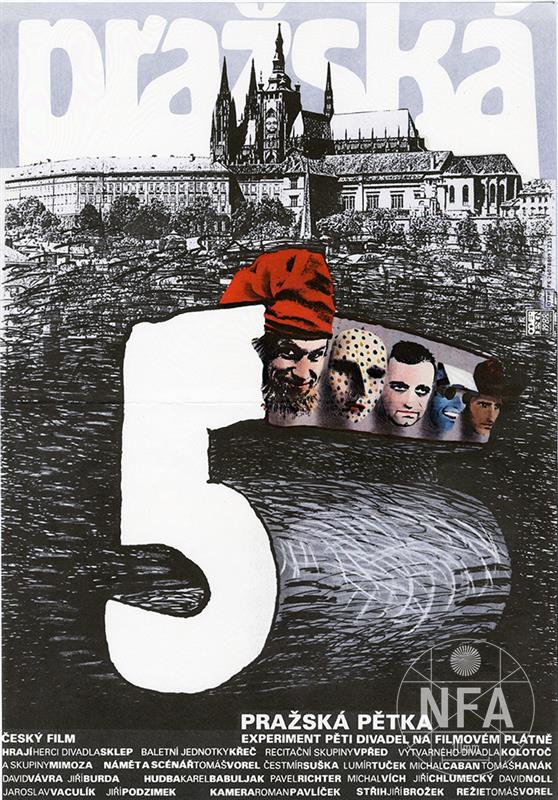