Author and screenwriter Jiří Marek achieved fame with his TV crime series Hříšní lidé města pražského (The Sinful People of Prague, 1968) directed by Jiří Sequens. Police counsellor Vacátko (Jaroslav Marvan) and his colleagues Bouše (Josef Vinklář) and Brůžek (Josef Bláha) hit the silver screen in the “Sinners'” films Pěnička a Paraplíčko (Burglar and Umbrella), Partie krásného dragouna (Game of a Handsome Dragoon) and Smrt černého krále (Death of the Black King) made between 1970 and 1971. In Vražda v hotelu Excelsior, the interwar period homicide detective squad from Prague investigates the murder of a wealthy woman, Mrs Matoušová, which threatens the reputation of the eponymous luxury hotel popular with Prague’s elite. Even the retired police inspector Mrázek (František Filipovský), who works at the Excelsior as a hotel detective, is unable to help at first. Although the investigation inevitably uncovers the hotel staff’s scheming, Vacátko and his team unerringly follow the trail that leads them to the murderer…

The hall of the Excelsior Hotel is filled with a song to which the elegant and rich guests are dancing. Among them are also two married couples from Kladno - the Janík and the Matouš family. The next day, the hotel manager, Arno Hnízdo, appears in the office of the police the superintendent Vacátko. After many digressions and notices of the great reputations of his hotel, the manager finally reveals that Dana Matoušová was murdered there during the night. The superintendent Vacátko and the detectives Bouše and Brůžek are questioning the hotel guests as well as the staff. The retired detective Mrázek, currently working as the hotel detective, cannot help them as he is apparently out of shape and was asleep. The apartment used by the Matouš family was during that night frequented by many people. The instrument of crime, an empty Cognac bottle, was thrown out of the bathroom window, where the coquettish Matoušová was found by her drunken husband early in the morning. A Persian diplomat, Zade, is also suspected, as he was flirting with the woman and his fingerprints were found on the bathroom doorframe. The detectives soon find out why the hotel manager and the rest of the staff are so nervous. The hotel is a venue of gambling and false card games. Gambling was a source of income not only for the waiter Pepa, the pianist Krofta and the hotel manager, but also for Janík and Matouš. The crime reconstruction gradually excludes most of the suspects. Matouš tries to blame the diplomat. He killed his wife himself though, out of jealousy. He reveals his guilt because he is the onlyone to mention where the instrument of crime was disposed of. 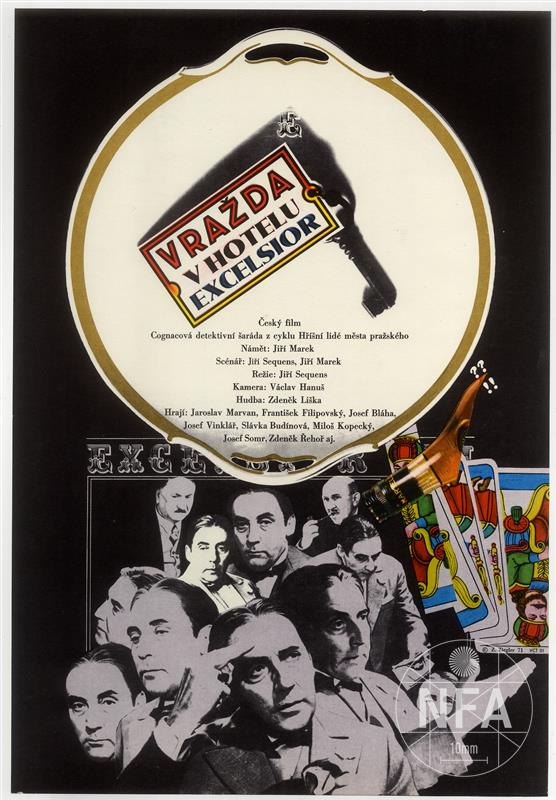