The fairytales of Božena Němcová have seemingly inspired filmmakers on countless occasions. It was her romanticised version of classic folk tale The Two Brothers that proved inspirational for screenwriter Ota Hofman, even though he was more of a maker of modern stories based on his own screenplays (first and foremost they were tales about the near-silent gentleman with a magical bowler hat, Pan Tau, or “Mr Tau”, the star of a 1970s Czechoslovak children’s television series). Besides writing the screenplays for Malá mořská víla (Little Mermaid, 1976), directed by Karel Kachyňa, and Panna a Netvor (The Virgin and the Monster, 1978) which had Juraj Herz in the director’s chair, Hofman scripted Třetí princ (1982). For its director, Antonín Moskalyk, this encounter with the fairytale genre was rather unusual. In this sphere, he only had a television adaptation of the theatrical play Kráska a Zvíře (Beauty and the Beast, 1971) on his resumé. Třetí princ (The Third Prince) is a narrative film in which the hero, Prince Jaroslav, sets out into the big wide world to find his lost brothers: his older brother Jindřich and twin brother Jaromír. Both siblings had fallen in love with the portrait of a mysterious beauty. In searching for this unknown princess, they had become hopelessly lost. Jaroslav discovers that Princess Milena and her identical twin sister have cursed his brothers. He is set three tasks that he must overcome to save them and ensure their marriage to the beautiful twins... Starring in the female dual role is that most popular interpreter of storybook beauties, Libuše Šafránková. She had appeared in Malá mořská víla, an adaptation of the Hans Christian Andersen fairytale The Little Mermaid. The motion picture also featured her sister, Miroslava, in the lead role. Libuše Šafránková had also performed in the fairytale Sůl nad zlato (Salt and Gold, 1982) as the humble daughter of the king, Maruška, and in the narrated fairytale Princ a Večernice (The Prince and the Evening Star, 1978), in which she played the female title role. In Třetí princ, the twins Jaromír and Jaroslav are played by the popular Pavel Trávníček, who had already starred alongside Šafránková in the fairytale picture Tři oříšky pro Popelku (Three Nuts for Cinderella, 1973). The part of Jindřich is performed by Jiří Bartoška.

Prince Jindřich, the only son of a king from the Lion Land, set out into the wide world and never returned. Many years later, the sad queen is captivated by a little girl from an itinerant conjurers' ensemble. The girl pays the queen back for a ring with some advice according to which the fishermen will catch only one fish. The cooked meat shall be eaten by the queen, the broth shall be drunk by a mare, the fish's head shall be given to a dog and the fishbones shall be buried in a garden. The queen then indeed delivers twins - Jaroslav and Jaromír - in a year. The mare has two foals, the dog has two whelps and two swords grow from the ground. The princes mature seven times faster than usual. The king takes care of their training in both horse riding and fighting. The boys are very close to each other and, apart from strength and valour, receive an excellent upbringing from their loving parents. They notice that if one of them is in danger, the swords always show it by starting to rust. The portraits of princesses from which the princes should pick their brides, also include one which is there by mistake. It is a painting of the beauty who had made Jindřich leave. Jaromír falls in love with her, too. The king, however, allows only one son to leave and the lot determines Jaromír. After a long ride, the prince arrives at some rocks where he meets the beauty from the painting. It is princess Milena who invites him to her dilapidated château in the Land of Diamond Rocks. There are piles of coloured precious stones in the château chambers, but they bring no luck to the princess. Her serfs keep on only searching for treasures instead of bringing prosperity to the land. Jaromír must fulfill three tasks in order to receive the princess's hand. When he has to look after a herd of sheep, he is mesmerized by a precious stone lying on the ground and the princess on the rocks, Milena's sister who is her spitting image and who puts a spell on him, turning him into a rock. Jaroslav can see from the rust on one of the swords that his brother is in trouble, and sets off to help him. He follows a merchant's advice and has his horse specially shoed for the rocks. He then not only manages to look after the sheep and horses but also wins a race with the cursed princess from the rocks. He forces the inhabitants to cultivate the land and liberates his two brothers from the spell. Jindřich marries the princess from the rocks and Jaromír marries Milena. Jaroslav prefers to entertain himself with village girls. 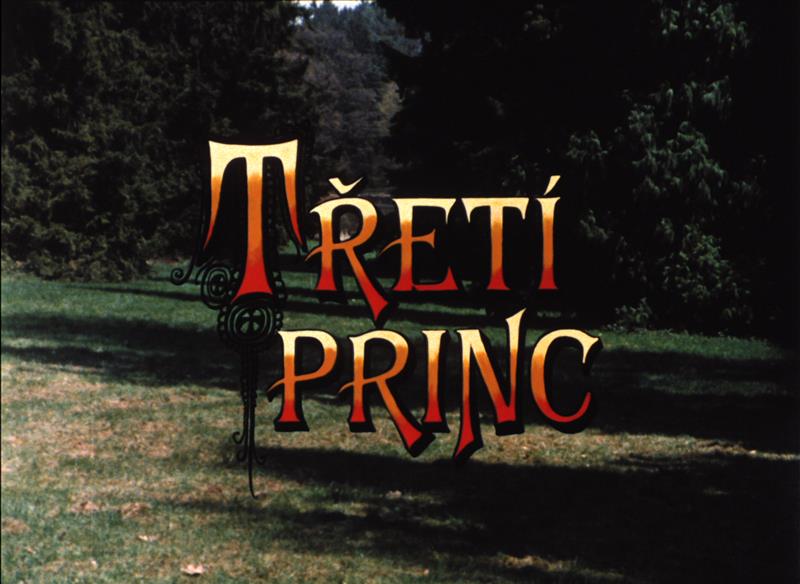 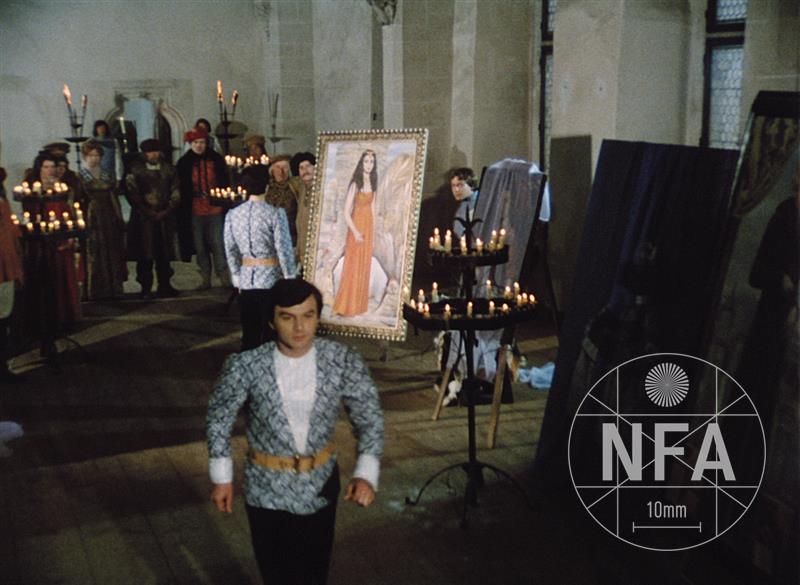 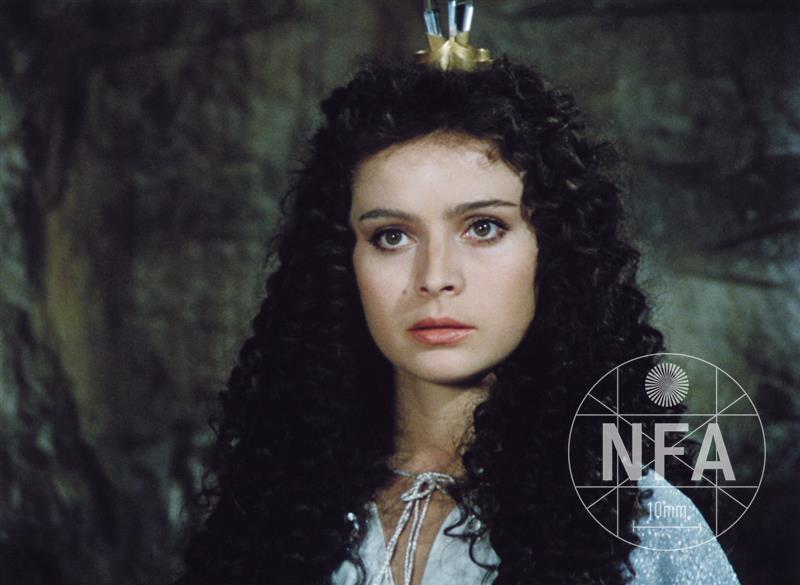 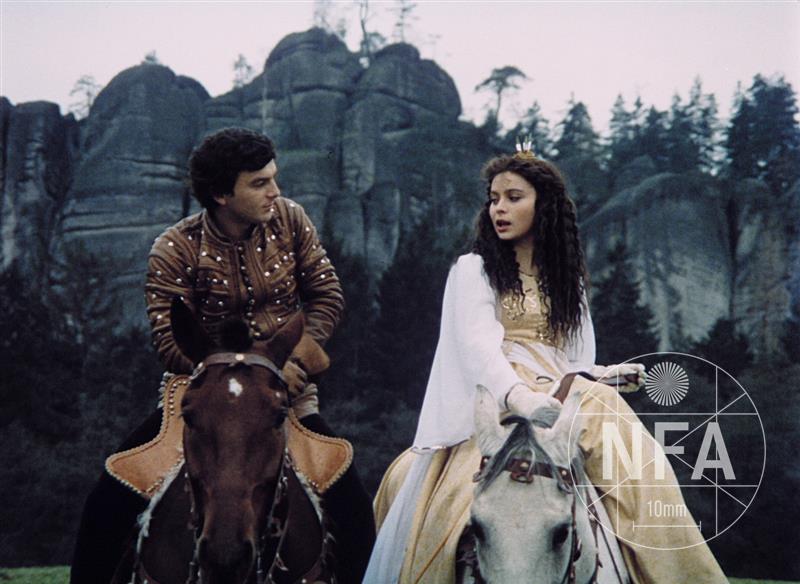