Back in 1965 and 1966 screenwriter Ota Hofman and director Milan Vošmik made a quartet of children’s detective stories featuring police captain Martin of the Czechoslovak public security service (public security was the communist-era term for the police). Following the movies Volejte Martina (Ring Up Martin, 1964) and U telefonu Martin (Martin Speaking, 1965), the head of the fictitious public security children’s unit returned in Martin a červené sklíčko (Martin and the Red Glass, 1966). The story concerns the hunt for the some murderous robbers from years ago. During a 1923 renovation of a castle, 33 various tiny gems were lost. The case is revived when one of the missing items is recovered among the castle’s exhibits. Mixed up in all this are some outwardly worthless rings being given away as prizes at the fairground along with some red glass through which the world looks wonderful... Jaroslav Vízner, brother of his better known actor brother Oldřich Vízner, again takes the lead role. In 1968, he emigrated to Switzerland and the ensuing Martin a devět bláznů (Martin and Nine Fools, 1966) became the last film of what started out as a promising series.

At an old chateau, the custodian spices the routine commentary for visitors on a sightseeing tour with a story about murder and robbery which occurred at the chateau in 1923 during its restoration. The chateau manager was killed and thirty-three small diamonds were stolen from old weapons and a crucifix. When the visitors leave, the custodian, who doubles as a painter, dusts the exhibits. The glass of a weapons case breaks and falls out and the painter finds one of the diamonds. The fingerprints of a child are found on the glass and the investigation is thus entrusted to Captain Martin, the head of the police's child department. Martin and his colleague Kraus follow several leads simultaneously, paying only belittling attention to the local police constable. The police constable finds out that three workers from those who were involved in the chateau's restoration in 1923 are still alive, and seriously suspects one of them. After many reversals in the investigation, it is his hypothesis, which turns out to be the truth. The suspect, however, died several weeks ago and the diamonds stolen by him were inserted into priceless child's rings, which are part of the "fortune-telling" envelopes sold at the country-fairs. Martin discovers one of the rings on the finger of a little girl at a children's pioneer camp and it is soon clear to him who is trying to steel the jewels from the heirs of the dead man. After a short pursuit he captures the culprit – the photographer Tondl. Martin is left with a gift from the little girl as a memento of the case – a little red glass through which the world looks so beautiful. 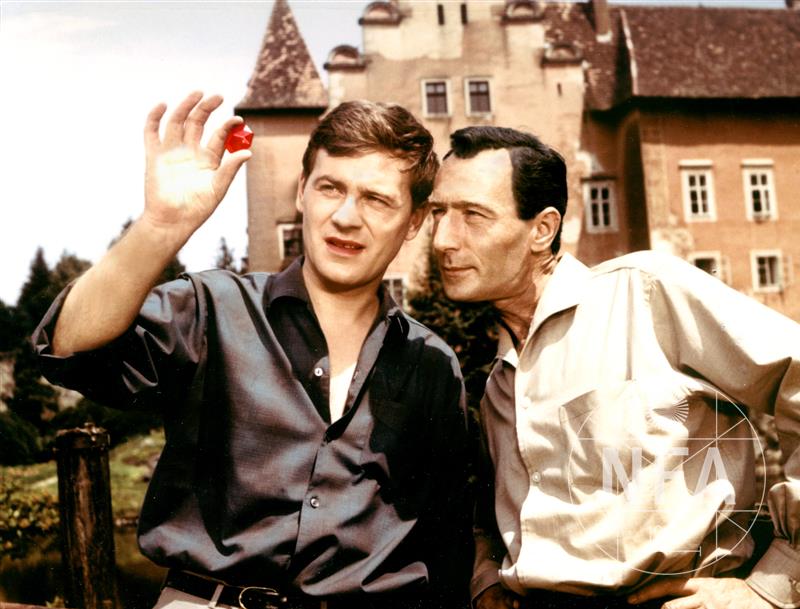