Game of a Handsome Dragoon

The television detective series Hříšní lidí města pražského (The Sinful People of Prague, 1968) was so successful that its fans could not wait to see police counselor Vacátko and his murder squad on the silver screen. That film, Partie krásného dragouna (Game of a Handsome Dragoon), was based on several TV episodes: Pěnička a Paraplíčko (Burglar and Umbrella, 1970), Vražda v hotelu Excelsior (Murder at the Hotel Excelsior, 1971) and Smrt černého krále (The Death of the Black King, 1971). It also drew on a book by Jiří Marek, giving rise to a costume tragicomedy in which a lieutenant of the dragoons, Rudi Macháček, a slick ladies’ man, is suspected of murdering wealthy women. Another suspect is circus performer Zuzánek, the nephew of one murder victim... As with the TV series, experienced writer-director Jiří Sequens relied on the atmosphere of old Prague and solid performances from actors Jaroslav Marvan, Josef Bláha and Joseph Vinklář as First Republic-era criminal detectives. Josef Abrhám excels in the role of philandering Macháček. Jiří Holý, as Zuzánek, yet again plays a villain.

In a suburban villa, a woman of means named Zuzánková is murdered. Police Superintendent Zdychynec from the Prague Libeň neighbourhood reports the case to Police Councilman Vacátko, upon whose order an investigation is launched immediately. After the testimony of Zuzánková's neighbour, Zdychynec begins to suspect the wooer of his own daughter Kamilka, a handsome dragoon named Rudi, of the crime. In Rudi's absence, Zdychynec searches his rented room in the apartment of the elegant Mrs Dragičová. All his findings – among others, sand left on Rudi's jackboots and a decent amount of money in his bedside table – convince the superintendent that he is following the right lead, especially when Rudi refuses to say where he was at the time of the murder. The superintendent moreover learns that his Kamilka is pregnant by Rudi. Upon revealing this to Vacátko, the police councilman appoints detective Brůžek to follow Rudi in secret. Brůžek finds out with little effort that Rudi has not got only Kamilka pregnant but several other trusting girls, as well. Rudi thus delivers customers to Mrs Dragičová who, for a considerable charge, then helps the girls terminate the unwanted pregnancies and shares the income with the culprit. The person who leads the police to the real murderer is Mrs Zdychyncová. She reveals to Police Councilman Vacátko that Mrs Zuzánková had a nephew named Pepa who ran away and joined the circus – and it was on the very day of the murder that Circus Colorado was passing by. Pepa confesses to his crime under the weight of evidence. Rudi is getting married, but his bride is an old and ugly woman. "The mills of God...", Police Councilman Vacátko comments dryly on his wedding. 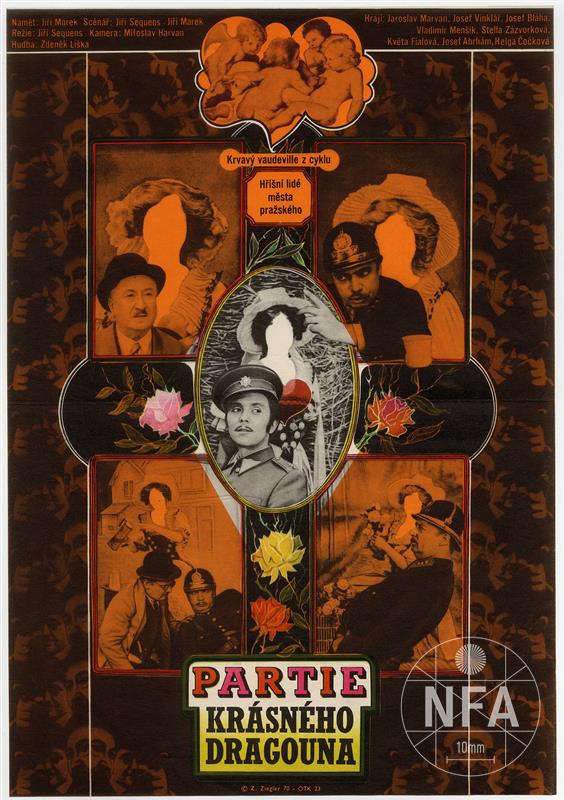 Game of a Handsome Dragoon