With his “problematic” dramatic debut in 1984, Džusový roman (Juicy Novel), documentary filmmaker Fero Fenič took his place in the ranks of provocateurs that were criticising the status quo. The release of that drama about a young worker was delayed by four years. But Fenič was already stubbornly working towards getting his next feature film – namely this metaphorical drama about the devastating moral decay of a high-ranking functionary – into the cinemas. The protagonist of the motion picture’s expressively conceived narrative is Zdeněk Pešan (Polish actor Jan Tesarz), a man who is rightly afraid of losing his until now untouchable position. On the way to his aunt’s funeral, he finds himself in a company Tatra 613 vehicle accompanied by his secretary and mistress Olga (Ewa Žukowská) and the border guard Ondřej Zeman (Jiří Bábek), who has been laid off for shooting a trespasser on a border crossing and must now content himself with chauffeuring an official. As the large luxury car travels along the road back to Pešan’s native town, the functionary experiences the awakening of memories of his youthful nation-building years. His original ideals, however, have been devastated and his meeting with “the compatriots” of his town is far from being as ideal as he had anticipated. Moreover, he discovers that it is not his aunt, but his unwanted son, who has been killed. The driver Ondřej is mixed up in the murder.... Fenič’s unusual film – an apparent indictment of the decaying socialist regime – only made it through the approval process thanks to the atmosphere of coming political change (although Zvláštní bytosti [Strange Beings] came after Soviet “perestroika films”, such as Monanieba [Repentance, 1987], a comedy drama by director Tengiz Abuladze). As a breakthrough film, Zvláštní bytosti, which was not seen by the public until after the 1989 Velvet Revolution, does not only operate with transparent symbols and metaphors. It also uses socialist era icons, starting with the wildly popular singer Karel Gott, and ranging across the progressive singer-songwriter Jaromír Nohavica, the “Prague Spring” singer Marta Kubišová (film audiences got to hear her banned voice for the first time in 20 years) and the “Plastics” (or the Plastic People of the Universe, transformed into the band Midnight for the film). The viewer can also not fail to notice acclaimed Czech film director Jiří Menzel who plays “Alexander Slováček” (representing pre-Warsaw Pact invasion Czechoslovak prime minister Alexander Dubček) in this motion picture.

A high functionary named Pešan hysterically begs for an intercession from his superior, sensing that he is losing his position. A soldier of the frontier guard, Ondřej Zeman, arrives in Prague for his first short leave. He is expected by his girlfriend Jana at the railway station and the two look forward to spending some private moments together. The functionary realizes that he should have attended his aunt's funeral, but the driver has already left home. Pešan's rather vulgar assistant and lover, named Olga, readily offers the place behind the wheel of the service Tatra 613 car to Ondřej Zeman who once asked her for a position in the office as soon as he returns from the military service. Ondřej only hesitantly agrees and parts with Jana. The gatekeeper says good-bye to Pešan servilely but Pešan knows that the man anonymously reports on him, pointing out his incompetence and love affair in the letters. The car is halted by a police guard but as soon as the policemen recognize the passenger, they immediately let the car go. When the drive is interrupted the next time, Pešan talks to the women cooperative members who, however, find his clichés ridiculous. Ondřej notices an odd man who he had already spotted at a railway station. The functionary in the car recalls his organizational and creative enthusiasm in his youth. The procession entering the cemetery is not the right one – it seems that they have arrived late. Pešan decides to visit his cousin and apologize for his absence at the funeral. They give a lift to two hitchhikers – a punk couple. The two exchange several invectives with Pešan and the man throws them out. The Tatra car arrives at the functionary's native townlet. In the local pub, Pešan runs into Cyril who he once pulled up and employed because he was his compatriot. His subordinate shows that he already knows about his boss's loss of influence. A concert of the underground band Midnight is to be held in the pub's hall and the shocked Pešan wants to ban the concert. Ondřej finds a knife stabbed in the car's tire. The local officials invite the native and Olga to a shelter where they get drunk, recall the past and eventually have a fight. The car is repaired and the three can finally leave. Olga secretly tells Ondřej that Pešan took her in after her husband's 1968 emigration, at the same time getting rid off his pregnant lover and assistant Milka who he married for his cousin. Ondra repeatedly, but vainly tries to reach Jana on the public phone. The car arrives at an abandoned house. The mourning cousin and his wife Milka take Pešan to the coffin. It turns out that this was a ridiculous misunderstanding – the aunt died long ago and the dead person is Pešan's unwanted son. Ondřej was awarded the leave for shooting a young borderline violator dead. The drunk Pešan makes a scene at the coffin and Ondřej recognizes the shot young man from his clothing. He runs out. The odd man passes by, looking for a levelling point, and Ondřej joins him. 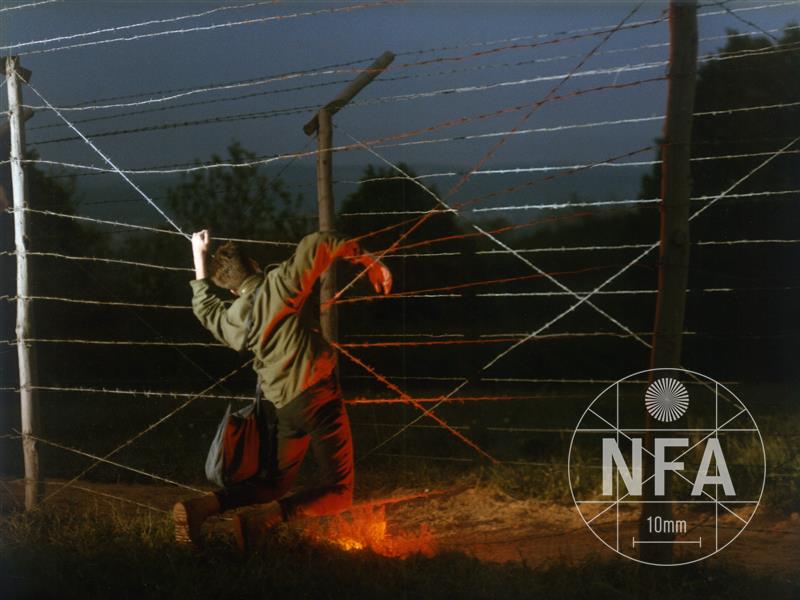 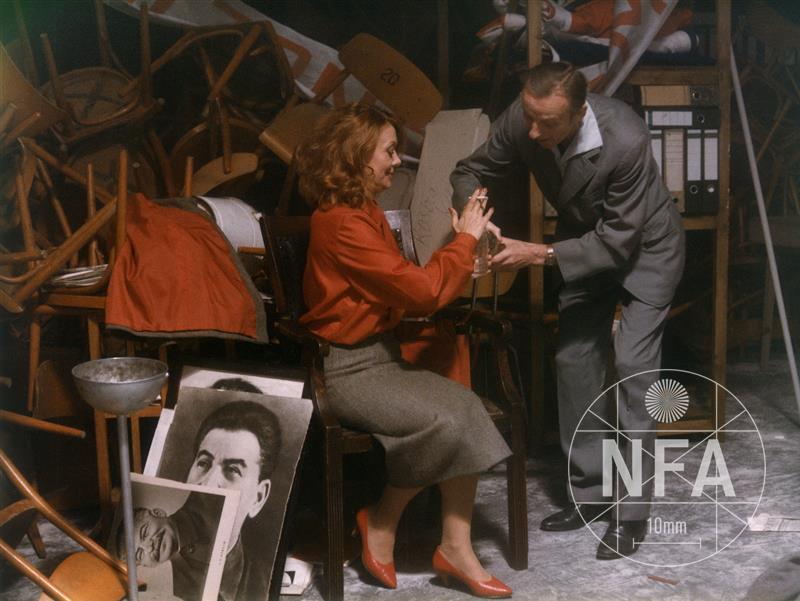 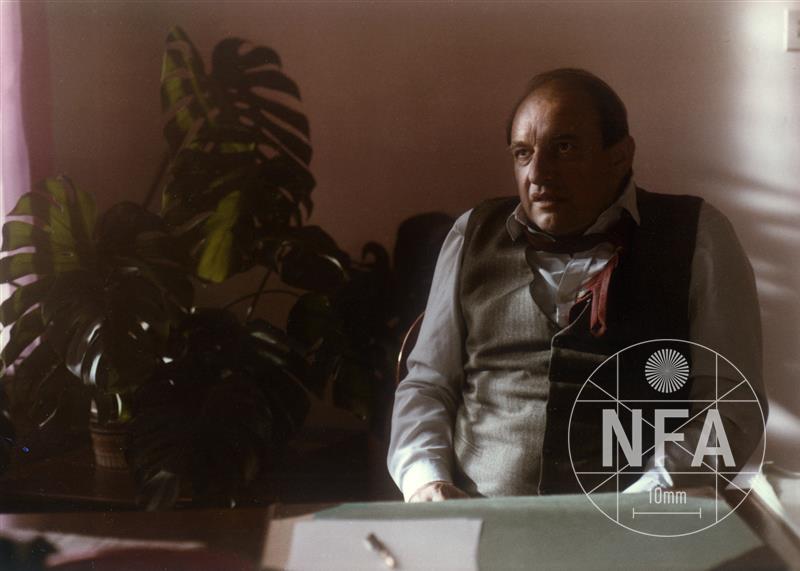 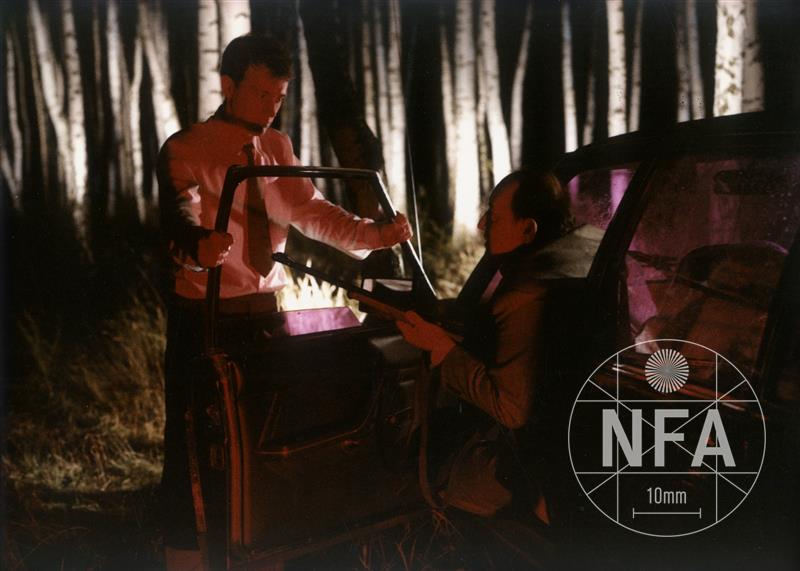