One of the most celebrated titles of the Czechoslovak New Wave. This 1966 picture was director Jan Němec’s second feature film following Démanty noci (Diamonds of the Night, 1964). Following that existential wartime drama, written in collaboration with author and screenwriter Arnošt Lustig, Němec teamed up with Ester Krumbachová for his second film. This screenwriter, author and designer was a key figure in the New Wave, which brought forth a dynamic and liberated aesthetic into the country’s cinema output. Her collaboration with director Věra Chytilová continued beyond the 1960s era, during which time Krumbachová also worked with Němec as a costume designer in Démanty noci, as well as on the scripts for Mučedníci lásky (Martyrs of Love, 1966) and O slavnosti a hostech (The Party and the Guests, 1966). The main characters in this loosely flowing tale are a group of people who, on an ideal summer’s day, head out to the birthday party of a highly-placed important personage. The jovial host presents a facade of well-being, but the open-air celebrations are disrupted by a seemingly insignificant minor annoyance. One of the guests – a brooding husband – leaves. This leads to a manhunt, led by Rudolf, a member of the host’s security detail. A hunting dog and most guests also join in. The reason for the fuss is that the missing guest has broken an unwritten rule of this micro-society, based on apathy, blasé lies, and a hushed-up sense of guilt. Němec’s minimalist story of escape can be read in various ways (primarily as a political allegory about the various masked forces pulling the strings behind-the-scenes, willing to liquidate anyone unwilling to partake in the “collective” celebration of the regime). During its premiere, the film offended regime sensibilities and was subsequently even subjected to a parliamentary inquiry. After briefly being banned outright, during the 1970s and 80s the film disappeared into the censor’s “vault”. The film features many noted Czech intellectuals of the day. Its Kafka-esque tones brought it much international acclaim.

It is a summer day. Several people in good humour are having a snack on a meadow. Josef is meticulously polite, Karel sips wine and keeps praising democracy, František proves to be a good companion, Eva and Marta are jolly girls. The only married couple is a talkative blonde and her taciturn and a bit withdrawn husband. After the snack, the company makes up, changes into cocktail dress and sets off to attend the birthday party of a high functionary. On a forest path, they are surrounded by a group of weird men. Rudolf, the leader of the gang, is seemingly sincere but in fact rather arrogant and aggressive. He divides the men and women into two groups and launches some kind of interrogation. Josef turns servile, Karel protests a little, becoming the target of Rudolf's assaults and minor violence. The host appears in between the trees in a white tuxedo, shouting Rudolf down but at the same time claiming him as his adopted son. All the visitors tenaciously pretend that everything was just a joke and seat themselves by set-up tables. The blonde weeps because her husband has left. He did not enjoy the company where no one likes anybody. The host feels offended. Rudolf decides to make everything right and sends his men headed by a dog-hunter to find the husband, arming himself with a gun. The subsequent man-hunt involves most of the guests. Those who remain put the candles off, sit by the tables in puzzlement and listen to the increasingly loud barking of a dog. 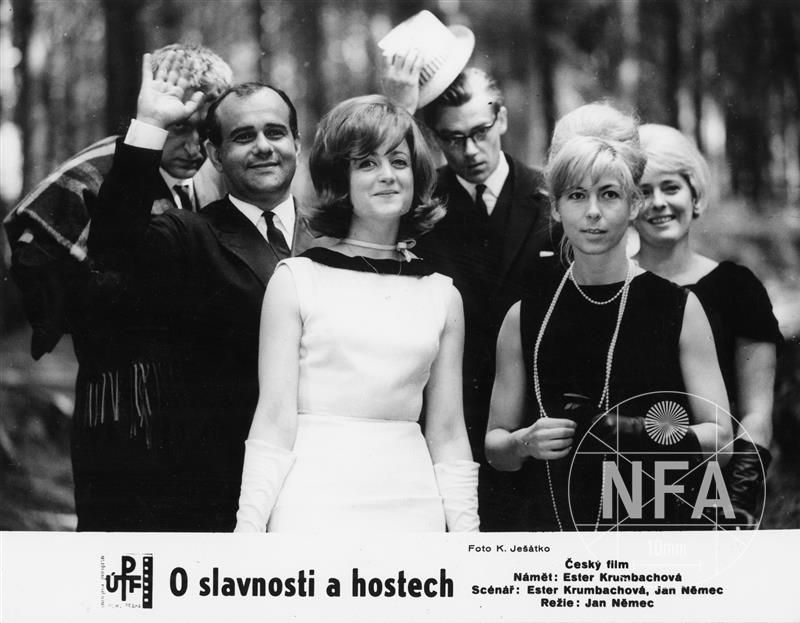 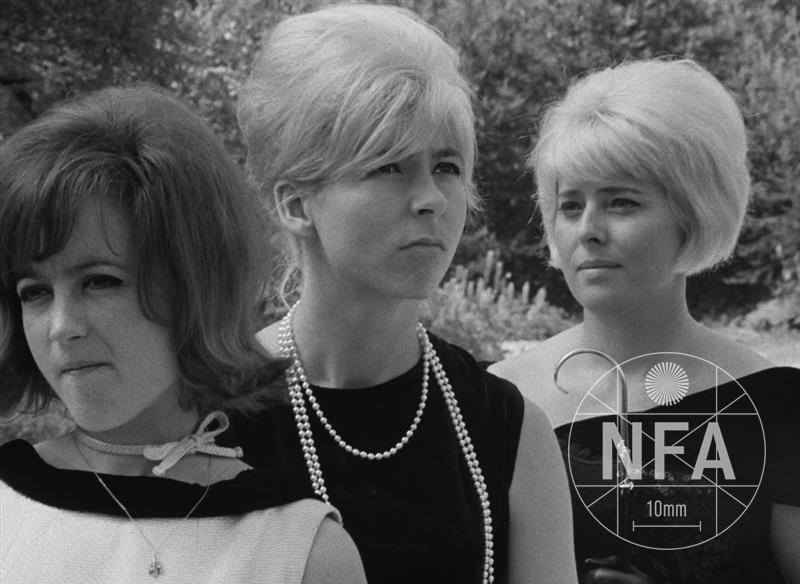 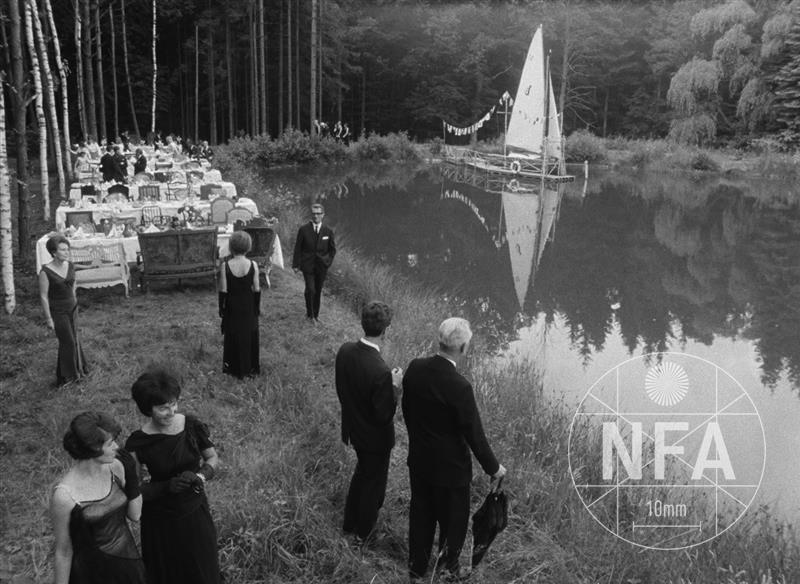 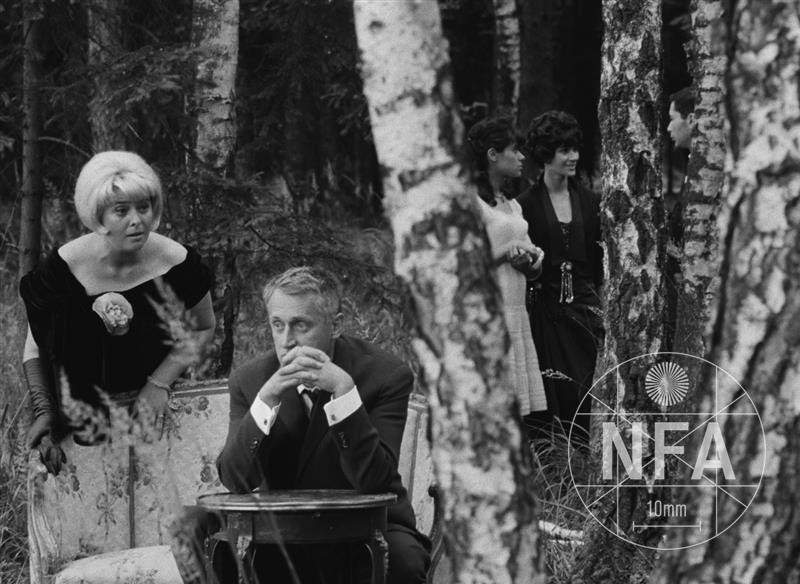 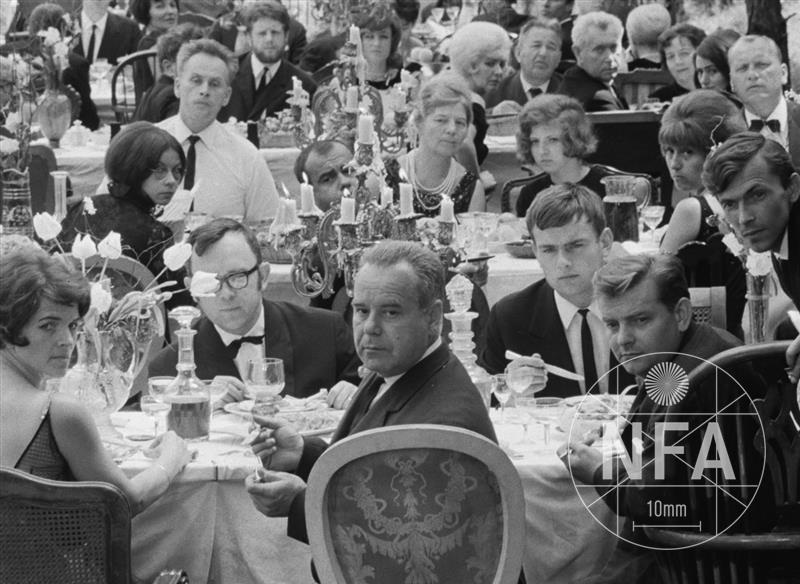 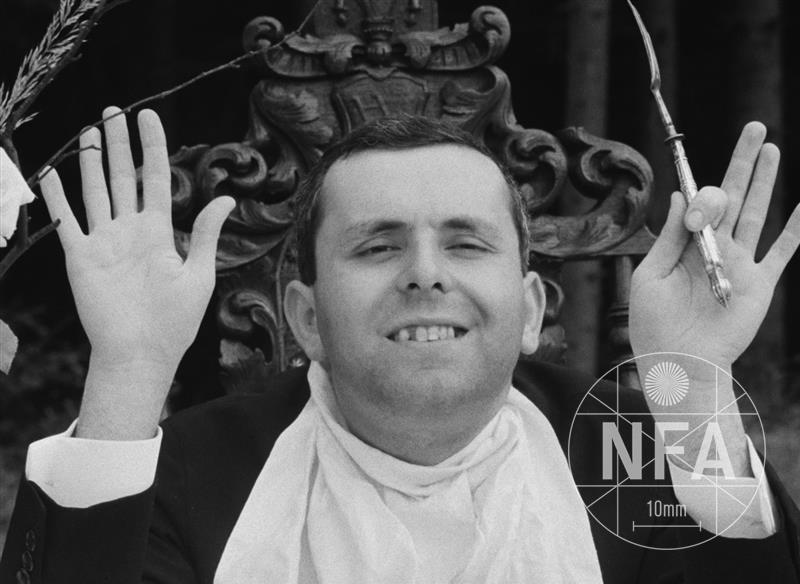 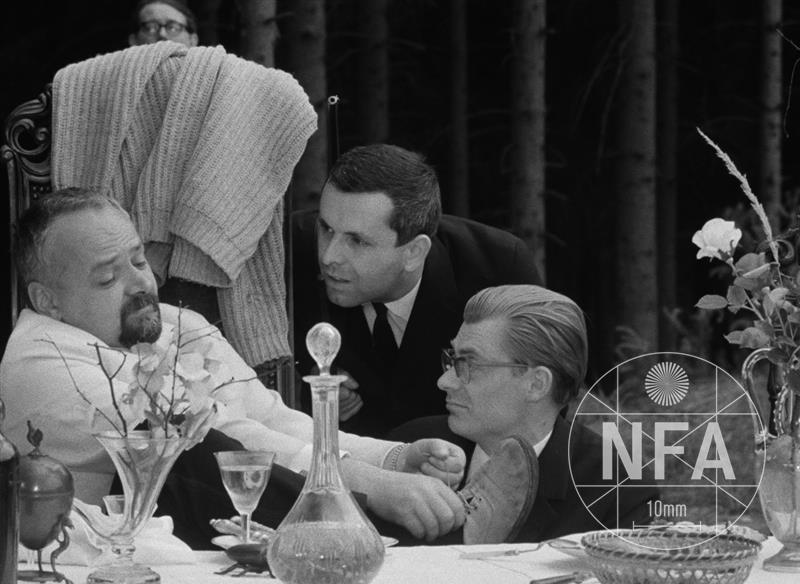