Wartime drama Zbraně pro Prahu (Weapons for Prague, 1974) serves as a quintessential example of “normalisation” era regime propaganda. Written by Jaroslav Dietl, and directed by regime loyalist Ivo Toman, the film is set in early May 1945, during the events of the Prague Uprising when Czechs rose up against their Nazi oppressors. Casting aside the potential risks, railway workers from the countryside decide to lend a helping hand to their urban insurgent compatriots. Karel Hlušička and Jiří Kodet star as the heroic railwaymen, while director Kodet also cast his wife Slávka Budínová (she appeared in a number of his films) as the wife of a military officer.

In May 1945, Prague citizens revolted against the Nazis. A train shunter Jan Chýně is called to a small train station by his friend Bubeník, one of the fighters. Prague urgently needs weapons. The shunter firstly succeeds in a derailment of an armoured German train, assisted by an engine driver Klika. They do so by putting a coal train into motion against the German train, jumping off in the last minute. They get weapons from the destroyed train - mainly a damaged anti-aircraft gun. Jan's father, a former employee of a arms factory, repairs the gun, but later he gets killed. A dandyish First-lieutenant Šauer takes the command of the train with the guns for Prague. The spontaneously established rail-military unit is completed by a young practitioner Jiřina, who has a platonic relationship with Chýně. He is a manly guy, but much older then her. They succeed in seizing more weapons from a German ammunition dumps, whose commanding officer gives in to a Czech colonel, not exactly bravely hiding at home. The train eventually reaches Prague, although it costs several railwaymen's lives. Chýně meets his friend Bubeník, who was claimed dead. But the drama has not finished so far - the train station is attacked by a German bomber and a part of the gained ammunition explodes. First-lieutenant Šauer decides to go back for the remaining load of arms. They catch sight of the Soviet tanks - everybody knows that freedom is close. 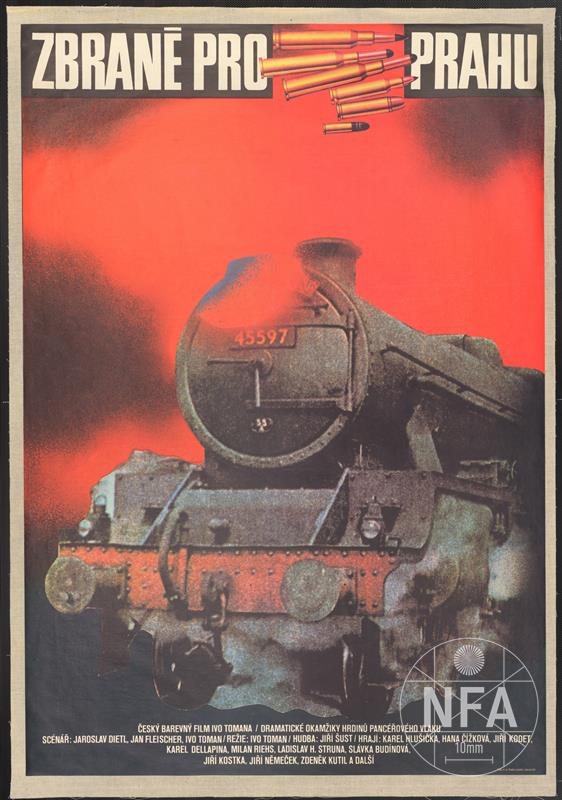