By 1985 Slovak director Martin Hollý had already made several historical film and TV productions, including Signum laudis (1980) and Noční jezdci (Night Riders, 1981). …nebo být zabit (...or Be Killed) is a war drama that takes place in March 1945. Screenwriters Kamil Pixa and Jaroslav Vokřál wrote the story of two concentration camp prisoners who decide to escape once they learn the Nazis intend to kill off all inmates. Ernest is a veteran of the Spanish civil war; young resistance fighter Kim lost his family during the Nazi reign of revenge and terror following the Heydrich assassination. Together, they set out on a dangerous mission that will require both courage and ruthlessness. Milan Kňažko (Ernest) and Martin Zounar (Kim) give brilliant performances in this harrowing, expressive story.

It is March 1945. A Nazi officer lets the concentration camp prisoners spend a night together. He cynically tells his colleague about the plan to liquidate them all the next day – he will certainly not let the three thousand witnesses live. Only a few dozen prisoners are ordered to search for unexploded bombs left by the allies' blitz in a nearby small town. The rest die in an underground ammunition factory which is blown up. The prisoner Ernest from Vienna, a veteran from the Spanish civil war, and the very young resistance fighter Kim from Prague, who is the only one from his family to have survived the Nazi terror following the assassination of the Reichsprotektor Heydrich, prepare for their escape. Ernest makes two needle-pointed daggers from screwdrivers and shows Kim how to silently kill by a stab to the kidneys. If they do not kill, they themselves will be killed. At night, they cut the barbed wire which gets twisted under the electric current. They also offer the others to escape, but a clumsy refugee activates the safety signal. Most prisoners are then shot dead. Ernest and Kim manage to escape. They are joined by the service wolfhound Ariel whom Kim tamed in the camp as the dog feeder. The refugees seize the coats and caps of a military patrol and watch from their shelter as two transports meet. One transport is the heavily wounded German soldiers returning from the front and the other one with young boys is just going there. Three shocked deserters are mercilessly shot dead by the officers. The couple arrives at a gamekeeper's lodge, where a German married couple treats them in a friendly way. But then the woman shoots the dog Ariel and the fanatic gamekeeper leads the refugees at the point of his gun to the village. Kim kills him without any qualms on the way. In the meantime, the gamekeeper's wife is raped and murdered by German soldiers who moreover set the lodge on fire and lay mines around it. Ernest tries to cross the mined meadow but is shot by a Soviet soldier. When Ernest's coat opens wide, revealing his striped togs, the Soviet sniper runs out to help the refugee and he himself dies in an explosion. Kim keeps on walking with his eyes fading away. The film ends with a quote from Dante's Inferno: "How frozen I became and powerless then / Ask it not, Reader, for I write it not / Because all language would be insufficient." 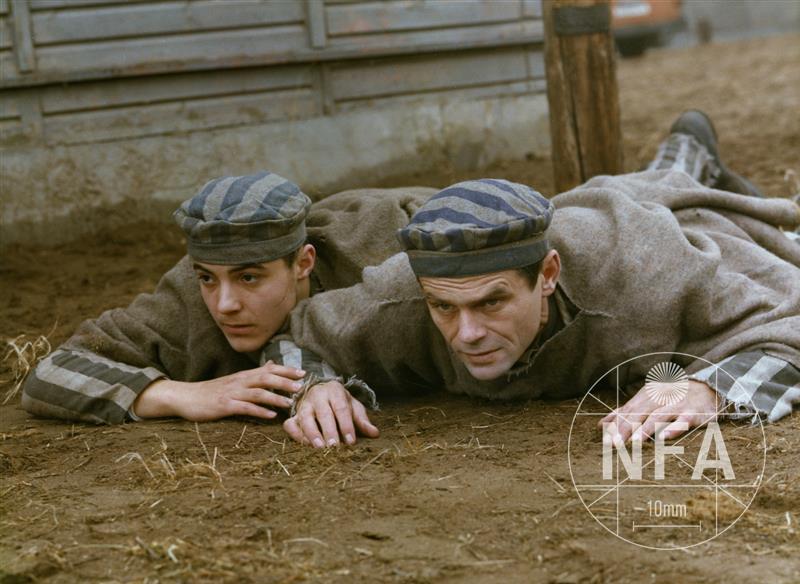 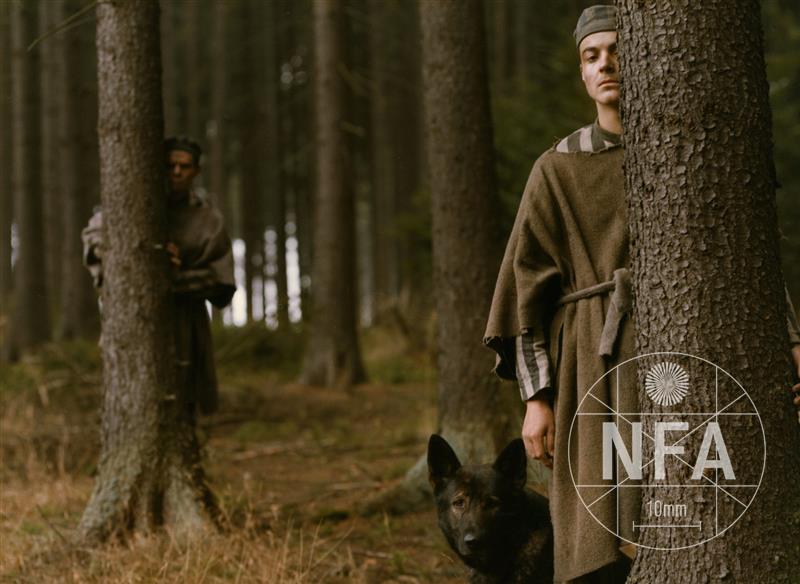 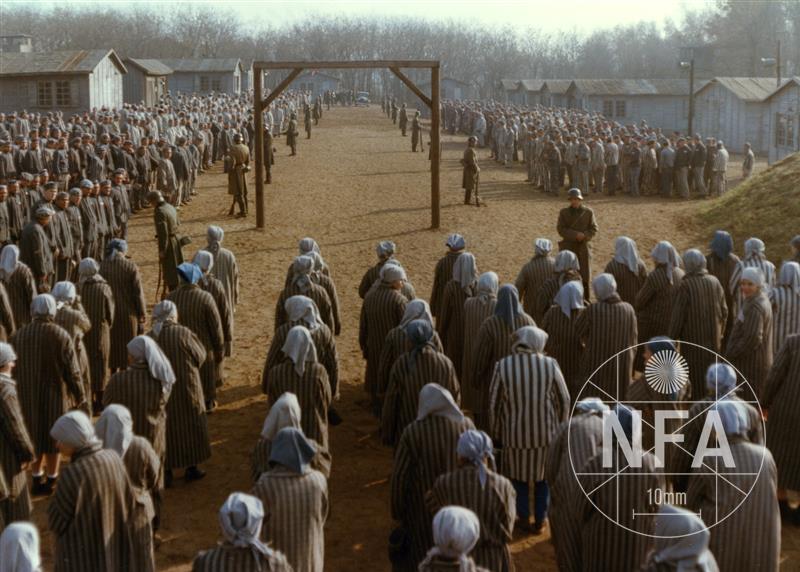 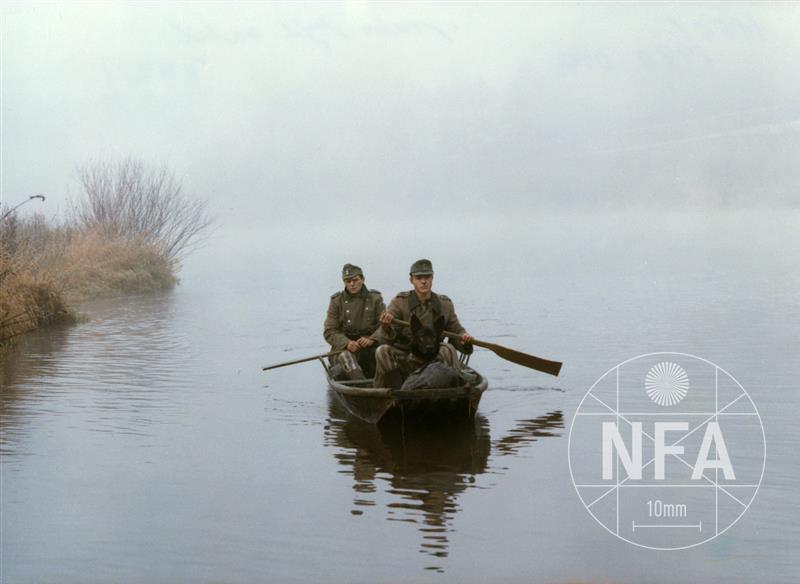 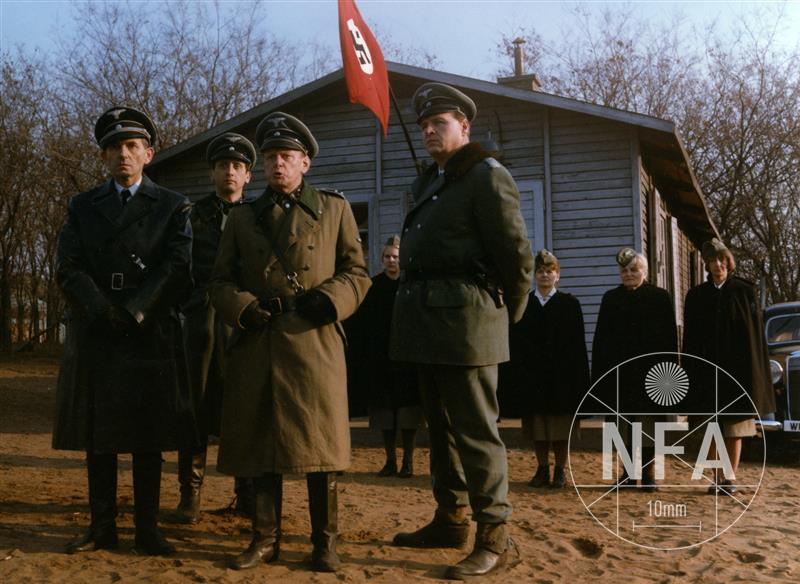