At the outset of his acting career Pavel Kříž was not exactly particular about film genres. Shortly after starring in the first of a series of “poet” comedies, Jak svět přichází o básníky (How the World Loses Poets, 1982), the then 21-year old actor took on the lead role in a psychological drama directed by Antonín Kopřiva, Zámek “Nekonečno” (The Château “Infinity”, 1983). The character depicted by Kříž, technical school student Pavel Brychta, arrives at a youth correctional facility located within a chateau in Konečno (“finitude”, a finite state or quality). He is an atypical, but not hopeless case for the institution. Pavel comes from a well-off family and his antisocial behaviour on the verge of criminality was some kind of response to his difficult relationship with his authoritative father. However, it takes quite some effort for Pavel to find his place in this environment of bullying, and also diverse methods from the tutors… Other attendees at the facility are played by David Matásek, Sagvan Tofi and Karel Roden, while Petr Kostka appears as Pavel's father.

Two newcomers arrive at the youth reformatory institute in the château "Infinity". Jirka Koblížek grew up in a children's home while student Pavel Brychta is from a wealthy family. Pavel, frustrated by the ignorance of his too busy parents, intentionally drove into a shopwindow with his father's car. The only person to whom he feels strong emotion is his schoolmate Radka. A rough inmate Hanzl and his gang earned a strong position by bullying in a closed department of the institute. The educator Hošek draws on their squealing and holds a protective hand over them. The educator Neján, on the contrary, discusses life with the boys and talks with them about their problems. The director Kodym wants to have order in the institute and does not care how the educators achieve it. His opponent, a psychotherapist called Veselý, condemns the exaggerated strictness and wants to give more trust to the inmates. The intelligent Pavel struggles to get used to the local routine and opposes the long-termers' methods. The institute, nicknamed Infinity, also has an open department whose inhabitants work in a factory, go to the town and receive passes to visit their families. Hanzl insidiously attacks Pavel and his friends. The guitar player Gejza cuts his hand on some by glass shards arrayed against the boys. During the morning jogging, someone trips up Pavel and the boy hurts his face. But the boys begin to successfully defend themselves. Pavel learns during his mother's visit that his father wants to intervene for him, but he is not interested. He only regrets that Radka does not reply to his letters, having no idea that the institute's management opens all letters and does not pass them on to the addressees. A boy with a disfigured hand, nicknamed Pacička (Little Paw), plans to escape. Pavel and Jirka, as well as Hanzl, join him, but the latter becomes afraid and changes his mind. Outside, Little Paw betrays Pavel that he had just used him because he would not physically have managed to escape alone. He wants to go to Vienna where he can undergo surgery on his disfiguredhand. During an ensuing quarrel, Paw hits Pavel's head with a stone and leaves him lying in a field. The inmate called Little Doughnut visits his brother Ondřej – who lost an eye after an attack by his father, a notorious alcoholic – in a children's home. The wounded Pavel spends a night with his beloved Radka. All the runaways are eventually caught and returned. Veselý manages to transfer Brychta and Little Doughnut to the open department. Jirka turns into an exemplary worker in the factory. He leaves the institution at the age of eighteen and promises his resigned mother to get a new life. Pavel, too, leaves the château, but he has a quarrel with his father already in the car. Radek's mother tells Pavel that she disagrees with him seeing her daughter. The unpopular town architect Brychta has let several old buildings, including the pub, where Radek's mother worked, be torn down because of a new hotel. Pavel will probably come together again with his father. It is also symbolized by the fact that he doesn't take notice of Koblížek, Ondřej and their mother, dragging a handcart with things to their new home in a tower block. 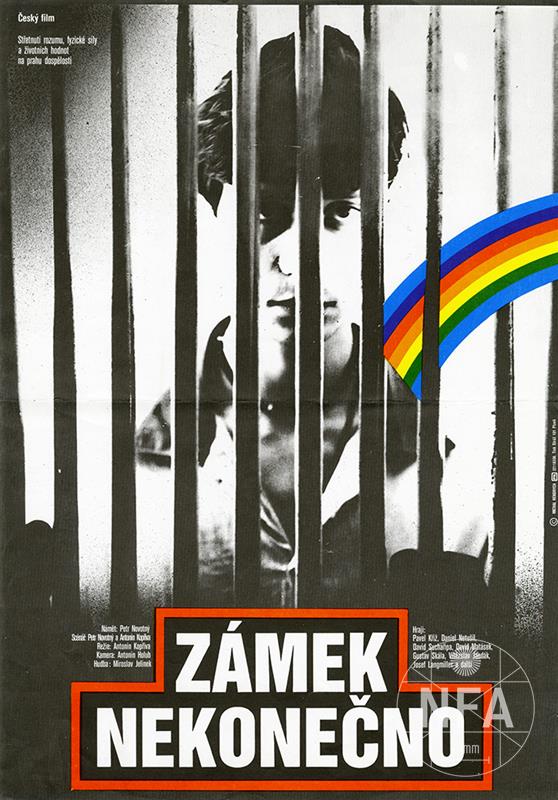