During the 1980s and 90s, director Vladimír Drha added to the treasure trove of Czech film fairytales with Jestřábí moudrost (Hawk’s Wisdom, 1989), O třech rytířích, krásné paní a lněné kytli (Three Knights, the Lovely Maiden and Flaxen Smock, 1996) and O perlové panně (The Pearl Maiden, 1997). This Polish-Czech co-production is loosely inspired by an Irish folktale. The sombre ballad relates a cruel curse hanging over the son of the king who is supposed to kill his father, according to the wise lore imparted by a hawk. So long as he fails to carry out this deed, the kingdom will be plagued by eternal winter. The king fails to have the dangerous child killed: baby Kryštof is saved by a bird catcher who raises him along with real son Jan. But when the prince reaches adulthood, he discovers that the trap of fate cannot be escaped easily. Polish actors Gregorz Emanuel and Piotr Rzymyskiewicz take the lead roles. Initially, Jaromil Jireš was set to direct, but production was delayed for two years by snowless winters.

The king and the pregnant queen listen in panic the prophecy of the Hawks mother: the son who is going soon to be borne will kill his father. Until that time, spring will not return to the Hawks kingdom. The queen dies during child birth. The king orders killing the new born baby, but the nanny brings him to the woods and puts him in front of the cottage of a bird catcher. The bird catcher takes the boy in. He calls him Krytof and brings him up, together with his own son, Janek. The Hawks kingdom suffers for twenty years from cruel winters. The wise man, Ordon, makes the king attack the neighbouring kingdom of King Ubald. Both Janek and Krytof must join the war. In a battle, Krytof kills the Hawks king, his own father. By that act, the battle is over and Ubald is the winner. Both young men, Janek and Krytof, fall in love with Ubald's daughter, Viola. The princess gives her ring to Janek, but Krytof, who is now the king of the Hawks empire, wants to marry her. Viola leaves for Krytof's empire and later she falls in love with the young king. When Krytof puts the crown on his head, an old Hawk appears in front of him. He reveals to him a secret hidden in a silver clip. The secret allows him to control the whole world through fire. The only thing that he cannot control is a human heart. With the help of the clip, Krytof brings spring to the whole empire. People look up to him and the king becomes conceited. Ordon, who heard the dialogue between the Hawk and the king about the clip, uses his weakness. Viola's father Ubald is going to his daughter's wedding. Ordon tries to fool Krytof that Ubald is his enemy and the king burns Ubald and his retinue with the slip. In that moment, Krytof's head begins to grow feathers. The frightened Viola runs away with Janek and the smith, Martin, from the castle. Krytof sends soldiers after them and he turns all elements against them. By this he changes totally into a hawk. In the end, he freezes the entire country. People blame Viola for this catastrophe. Therefore, the princess decides to come back to the castle. But there is no help for Krytof anymore. He lost a friend and Viola's heart and, according to the prophecy, he became a servant of Hawks. The false-hearted Ordon wants to get hold of the crown, he fights with Janek and he attempts to kill him. But Krytof exposes his own body. The dying king turns into again a handsome young man. The false-hearted Ordon is killed by Martin. He places the royal crown on Krytof's grave and a huge Krytof bust grows from the tumulus. Then Martin puts the crown on Jan's head and he leaves, alone.

This film should have been made by Jaromil Jireš originally, but two winters without snow have changed his plans. Therefore it was shot by Vladimír Drha in the end. 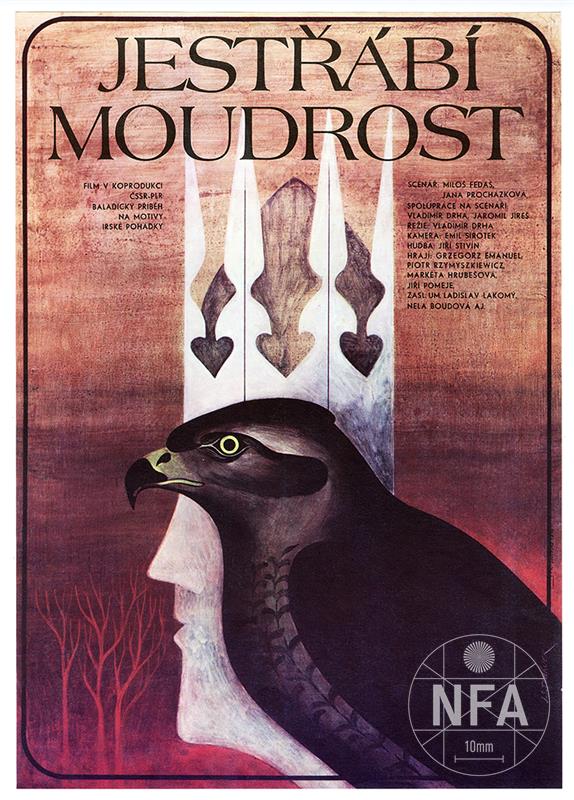