The magic of the First Republic underworld – the galerka (in Prague’s Žižkov quarter) – formed a major component of the popular television series Hříšní lidé města pražského (The Sinful People of Prague, 1968). Inspired by a book from author Jiří Marek, and adapted for the screen by writer-director Jiří Sequens, this 1970 film shifts the old world criminal comedy atmosphere, as well as the series’ characters, from the small to the big screen. The main protagonist – the astute police administrator Vacátko, portrayed by Jaroslav Marvan – becomes entangled in the tragic story of reckless prostitute Anča, nicknamed “Paraplíčko”, and her lover, the safe cracker Pěnička. The romantic drama set in interwar Prague sees Jiřina Bohdalová and Radoslav Brzobohatý in the lead roles. Police administrator Vacátko would feature in three further feature films and one television film. Pěnička a Paraplíčko (Burglar and Umbrella) is marked by a major effort by its makers to evoke the period atmosphere with musical numbers, which tilt this crime comedy towards being an actual musical.

In the morning twilight of Prague, the dead body of the safebreaker Toufar is found floating on the river Vltava with a knife in his back. Inspectors Bouše and Brůžek visit Toufar's lover, the prostitute Anna Kulatá, nicknamed Umbrella [Paraplíčko], and it is apparent that the moment before she opened the door of her flat, someone fled through the window. Umbrella is summoned for examination to the head of the criminal police - Police Councilman Vacátko, but although shocked by the photograph of the dead man, she does not confess to anything. Before Toufar, Umbrella lived with the safe-breaker Pěnička, who loved her very much and made her quit her street trade. But when he was sentenced to three years' imprisonment, Umbrella began to live with the brute Toufar, who chased her to street again. In the case of the murder, Pěnička is therefore the prime suspect. He has been at home for three months already and works with the coal-men, who confirm his alibi. But Umbrella is afraid of Pěnička and, following the advice of the criminal nicknamed Milk [Mlíko], tells Police Councilman Vacátko that the murder weapon belonged to Pěnička. The police come to arrest the safe-breaker, but he runs away to the attic of the house, barricades himself and shoots at his pursuers. Eventually, Police Councilman Vacátko himself sets off to face him. Pěnička confesses to killing Toufar in self-defence in a fight and Vacátko convinces him to hand himself over to justice. They leave together in a hackney carriage and the grieving Anna goes back to her old way of life, hooked on to the arm of her new lover, Milk. 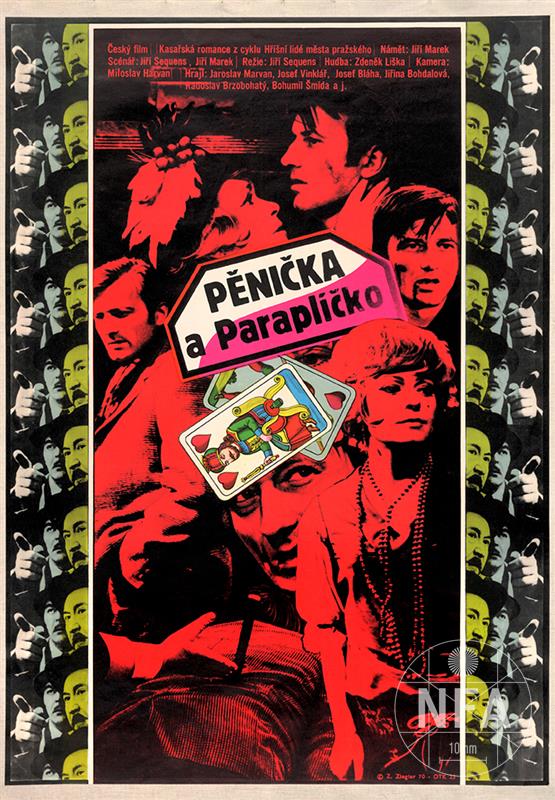