When it comes to adapting Jules Verne adventure novels, the most acclaimed name in Czechoslovak cinema is that of director Karel Zeman. In spite of Zeman’s playful adaptations of Verne’s style of techno-optimism, his Vynález zkázy (The Deadly Invention, 1958), Ukradená vzducholoď (The Stolen Airship, 1966) and Na kometě (On the Comet, 1968) nonetheless remain faithful to the spirit of adventure and heroism found in the respective works. In 1981, screenwriter Jiří Brdečka and director Oldřich Lipský took a rather different, albeit similarly original path. Tajemství hradu v Karpatech (The Mystery of the Carpathian Castle, 1981) is conceived as a parody, similar in tone to the pair’s previous joint efforts, namely the fantastical western Limonádový Joe aneb Koňská opera (Lemonade Joe, 1966) and the detective comedy Adéla ještě nevečeřela (Adela Has Not Had Her Supper Yet, 1977). Verne’s original novel, The Carpathian Castle, first published in 1897, contains elements of fantastical science-fiction and adventure, as well as terrifying gothic horror. This combination so enchanted Lipský and Brdečka, that they transformed it into a parody fantasy with nods to classic vampire stories (Verne’s novel was published five years before Bram Stoker’s gothic horror novel Dracula). The protagonist of this film is the heroic Count Felix Teleke of Tölökö (Michal Dočolomanský). When he is accompanied by his faithful valet Ignác (Vlastimil Brodský) during a stay in the Carpathians, the pair come across the trail of the count’s lost lover, opera singer Salsa Verde (Evelyna Steimarová). They discover that the diva has been abducted by the fiendish baron Gorc of Gorceny (Miloš Kopecký), whose castle home is filled with the bizarre inventions of the mad scientist Orfanik (Rudolf Hrušínský). The inventions are put to use during Teleke’s skirmishes with his demonic counterpart. Lipský and Brdečka’s film is regarded as one of the most popular Czechoslovak comedies of the 1980s, surpassing even the imaginativeness of Adéla ještě nevečeřela – both films have similar casts, as well as the creative participation of legendary surrealist filmmaker Jan Švankmajer, who, among other things, was responsible for the film’s stunning props.

Count Teleke of Tölökö and his faithful valet Ignác travel through the Carpathian forests. They save a young forester by the name of Vilja Dézi who was lying unconscious by the road. A local teacher takes them to the village of Vyné Vlkodlaky (Upper Werewolf) on a wagon. In their quirky dialect, the superstitious villagers talk about the Devil's Castle on a nearby rock. Vilja repeatedly, albeit vainly, tries to discover the mystery of the collapsing Gorc' castle residence. The count stiffens - it was the very Baron Gorc of Gorcena who kidnapped his beloved fiancé, the opera singer Salsa Verde. The next day, the count sets off to the castle, accompanied by Vilja and Ignác. He does not know that the local oddball, called Tóma the Deaf-Mute, is in fact Gorc's faithful servant Zutro. He informs his master about the events in the settlement around the castle which he hears with the help of a unique brass "wiretapping ear". Vilja casts his mind back to the fascinating woman and beautiful singer who he spotted behind one of the castle's windows. Teleke better sends Ignác for the police, who should take action if he does not return in twenty four hours. The two men get into the castle and find a room ready for them. All their steps are secretly followed by the baron on a TV screen. After a good meal, the count somewhat recollects his opera engagement - but his strong and well-trained voice destroys both Gorc's television and the glass components of yet other inventions of the insane doctor Orfanik, who is kept at the castle by the baron. - The demonic Gorc fell in love with Salsa years ago and pursued her everywhere. The gorgeous singer, however, suffered from serious heart disease and could not stand the baron. She became engaged to the Count of Tölökö and decided to give her last performance. But she collapsed in the theatre and a doctor was unable to save her. The body of the dead diva then disappeared from her dressing room. The count only found Gorc's letter saying that the singer was in his power from today forever. - Now, the count sees her again! The sleeping beauty, breathing lightly, rests on a sofa behind a glass pane in a boudoir. The count and Vilja are in no time locked in their room. Gorc wants to blow up the castle and the two men with it. He forces Orfanik to test the appropriate explosive. Its infinitesimal piece sweeps away the nearby little chapel and the compression wave shakes the castle's foundations. Zutro ties Orfanik up and throws him into the castle cellar. The experimental explosion enabled the prisoners to leave their room. They search for Salsa, liberate Orfanik on the way and then learn the truth. The illusion of Salsa's life signs was a result of Orfanik's film and sound devices. The boudoir only contained Salsa's embalmed body which disintegrates to dust as soon as the hermetically sealed space is entered. Orfanik can finally revenge himself on his tormentor Gorc, destroying both the film and the sound recording. Zutro dies in the ensuing fight. The severely wounded Orfanik is dying but before his death, he gives Teleke the plans describing his inventions. The count, Vilja and a police unit which has just arrived run away from the castle. A massive explosion scatters the castle with the devilish baron still inside. After some time, Count Teleke of Tölökö himself dies under the ruins of an opera building which his mighty voice made collapse. 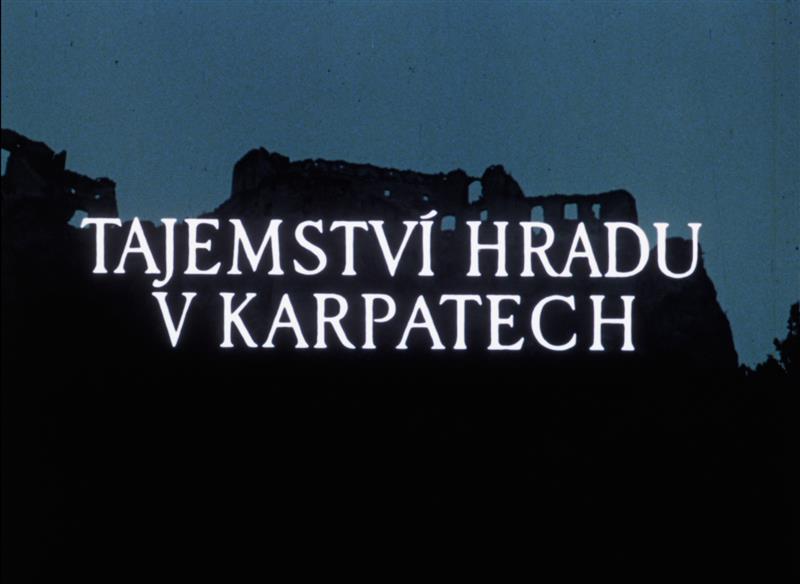 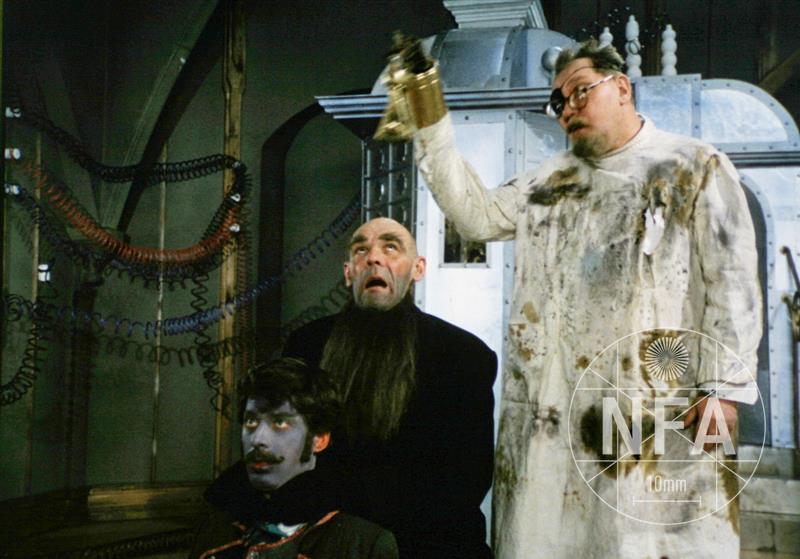 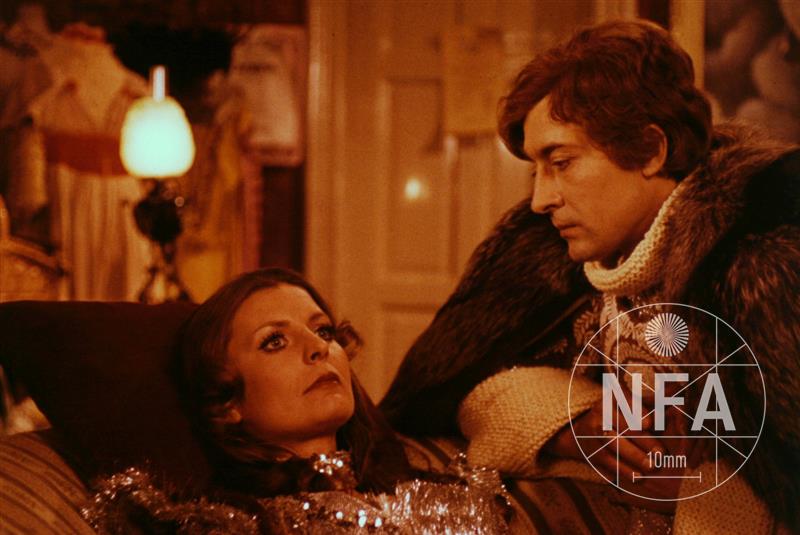 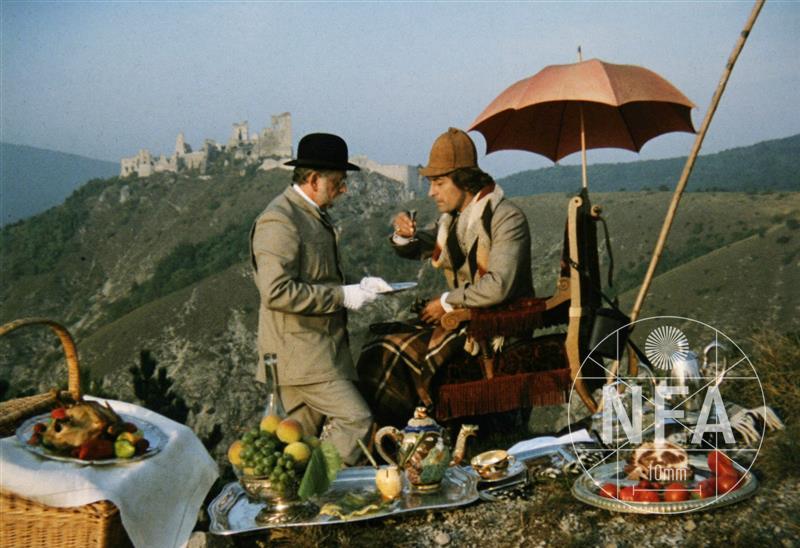