Director Zeno Dostál made this 1990 debut film at the age of 56. Adapted from his own novel entitled Lev (Leo), the story is inspired by the sign of the Zodiac. In Král kolonád (The King of Colonnades) the director – whose second and final film was the Jewish drama Golet v údolí (Golet in the Valley, 1995) – tells the story of the lead violinist in a Františkovy Lázně spa orchestra, and his relationship with the Jewish woman Róza. Their pre-war marriage is subject to the oppressions of the Nazi era. The man is unable to cope and becomes estranged from his wife and daughter, who both end up in a concentration camp. The devastated musician sinks into ever greater despair and alcoholism. Josef Novotný takes the leading role; director Dostál also cast the actor in his 1992 TV movie Váhy (Scales). Róza is played by Barbora Leichnerová, and secretary Valerie is performed by Ivana Chýlková. In this film, Zeno Dostál utilises largely unknown actors; the one exception is coffee shop owner Broda played by Vlastimil Brodský.

May 1945. At the creek is lying a shabby drunk man with a violin case. The instrument is not inside, just an empty bottle and bandage. The former first violin player in a spa orchestra recalls the old times in delirium. Before Christmas he was in the spa Frantikovy Lázně as a charming violin player admired by ladies in the spa treatment. He gets married with a Jewish nurse Róza, who is expecting his baby. The joy of the future fatherhood is spoiled by anti-Jewish signs and attacks of armed groups of German Nazis, ordners escalating after the Munich betrayal. The violin player believes that it will do if they move to the Moravian spa Luhačovice. His song "The Colonnade King" has a great success here. He meets an attractive secretary Valerie. The mother of the violin player likes Róza, but she minds a bit that she is Jewish. The newborn girl gets a Christian name Terezie, and a Jewish name Ruth Rachel. In October 1940 the Národní souručenství, a new political, nationalistic party, organised in the spa a fascist manifestation. Róza is afraid and she asks her husband in vain to emigrate. The violin player's father dies and he is reclassified due to the origin of his wife to play second violin. Róza and her little daughter leave to her parents. The musician starts drinking and he has an affair with Valerie. After Róza comes back she has to start wearing a yellow star. As recommended by Gestapo, the violin player moves away from the family and he is allowed to play the first violin in the orchestra again. Róza offers him a divorce. He does not accept it, but he drinks even more. Róza tries to break her leg unsuccessfully to avoid the transport. She jumps from the table, gets wounded and the drunken husband is seeking for bandage for her. Later the desperate violin player sees from the stage Róza and the little daughter leaving with a group of Jews to the transport. After the concert he is burning notes in the pub. Valerie approaches him that he became from the colonnade king a colonnade pig. His acquaintances consider him for an informer of Gestapo and they avoid him. In the end the prostitute Lidka takes him in. Valerie sleeps with a Gestapo man. The former first violin player fights at a village wedding because of a song which he used to play for his wife. His mother approaches him that he let Róza leave in the transport. He is fired from the orchestra and he is running away with the violin to the wood. The train he is in is bombed. He survives the air raid, but in a fit of psychosis he kills a vagabond with his violin case. In his confused mind he has ill imaginations. At the graveyard in his native village he is bandaging a statue of Jesus Christ. The gravedigger's son finds him later dead. His mother is looking for him with his rescued little daughter in Luhačovice. Róza died in the concentration camp. 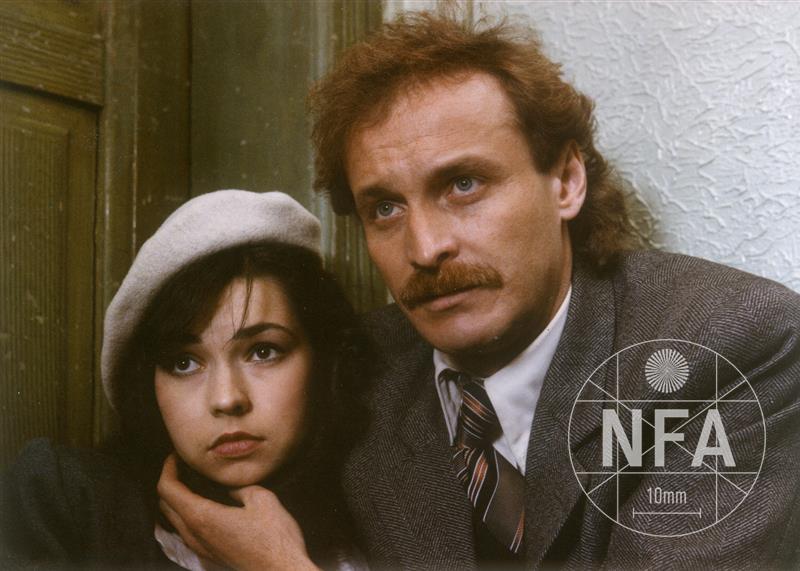 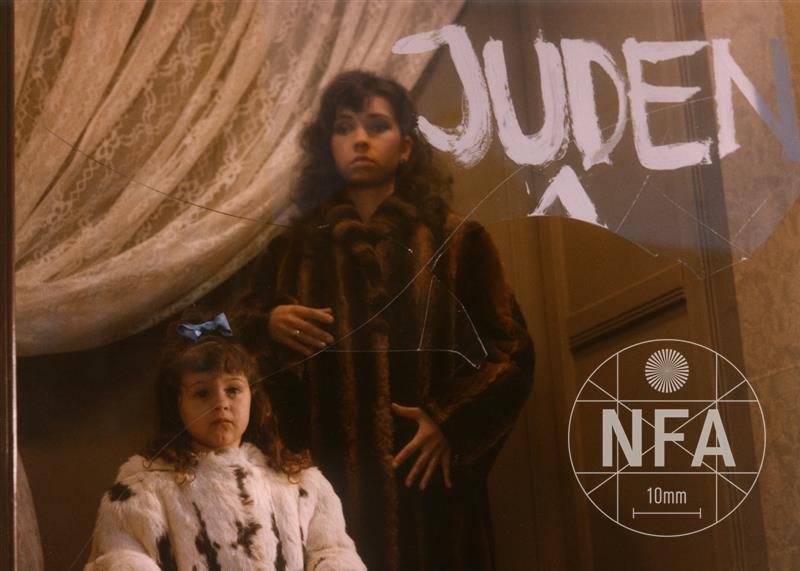 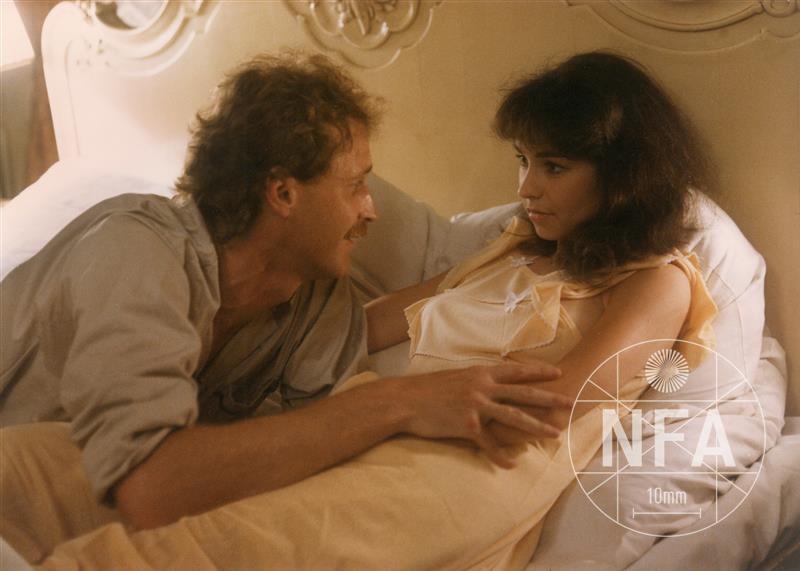 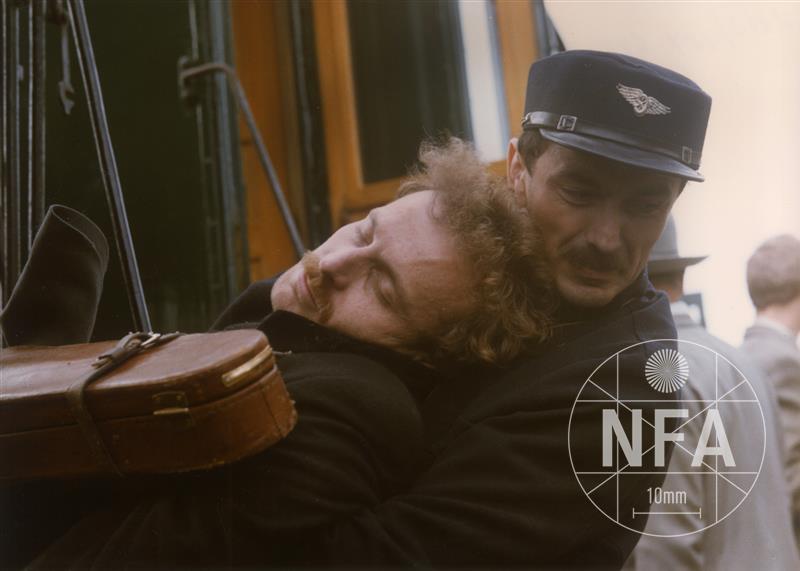 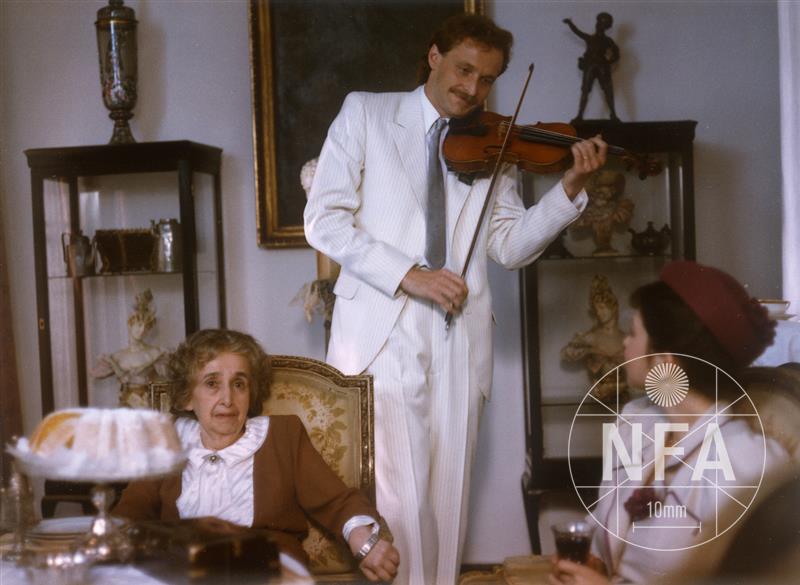