Thanks to filmmakers of the New Wave in Czechoslovak cinema the previously entrenched, ideologically hijacked view of World War II underwent a re-evaluation during the 1960s. One of the earliest films of this type is a drama made in 1965 and released under the rather ironic title of Ať žije republika (Long Live the Republic!). A breakthrough film, it was the result of a very rewarding cooperation between director Karel Kachyňa and screenwriter Jan Procházka. Back then, at the dawn of the 1960s, the more tendentious war drama Práče (The Slinger, 1960) had been added by the director, then aged 41, to his filmography. This earlier story of a young participant in the bitter battle for the Dukla Pass contrasts sharply with the tale of 12-year-old Olin, through whose eyes we witness the final days of the war. The Moravian village of Nesovice becomes the stage for accelerating events as both the frontline and the war’s end approach. The young protagonist lives in fear of his strict father, while simultaneously observing the adults’ behaviour with increasing bewilderment. He watches, for instance, as they show little hesitation before looting a vacant German farm or killing an alleged collaborator. Both the retreating German soldiers and the Soviet liberators are a source of apprehension for the boy in relation to the family assets – a mare and a cart – which he has hidden in the woods at his father’s command. Disenchantment with the world order is of course nothing new for Olin. He has already learned about greed and cruelty from his peers, by whom he is relentlessly tormented. With this film, Kachyňa established his reputation as a lyrical director, combining poetic and dreamlike images with the grim reality of the war’s final days. The impressive visual scope of the motion picture was in no small part thanks to camera operator Jaromír Šofr for whom it was a feature-film debut. Non-professional actor Zdeněk Lstibůrek excelled in the role of Olin, offering further proof of Kachyňa’s legendary ability to direct child protagonists. The film was also screened under the title Já a Julina a konec veliké války (Me and Julina and the End of the Great War).

It is the spring 1945 and the frontline is getting closer to the small Moravian village of Nesovice. Twelve-year old Oldřich Vařeka, nicknamed Shorty [Pinďa] for his tiny stature, observes the events around him, recalls his memories and also finds comfort in his fantasy. Although he is an only son, his father treats him harshly and brutally punishes his every trifle. Maybe he wreaks his vengeance on him for his own unsuccessful effort to compete with the richest farmers in the village. The boys from the wealthy farms poke fun at Shorty and he takes his revenge on them in petty malice. From a hide-out, the boy then watches the fleeing German soldiers. The Soviet troops are getting closer and the farmers including Vařeka send their sons with the cattle and horses into the forests, fearful of requisitions. They themselves, nevertheless, make no scruples to break into an abandoned German farm and steal everything. In the forest, Shorty has the family's only horse, and the wagon with it, stolen by three German fugitives. The boy fears his father's punishment and tries to steal one of the horses from a camp of Soviet soldiers, but is almost caught. In the morning, he meets a friendly Soviet officer and shows him a motorcycle left by Germans which he had found. They together enjoy a wild ride on the motorcycle, but the officer is killed by a German bullet. In astonishment, Oldřich watches the hypocritical behaviour of the villagers who force their fellow-citizen Cyril Vitlich to commit suicide on the basis of purported collaboration with the Germans. 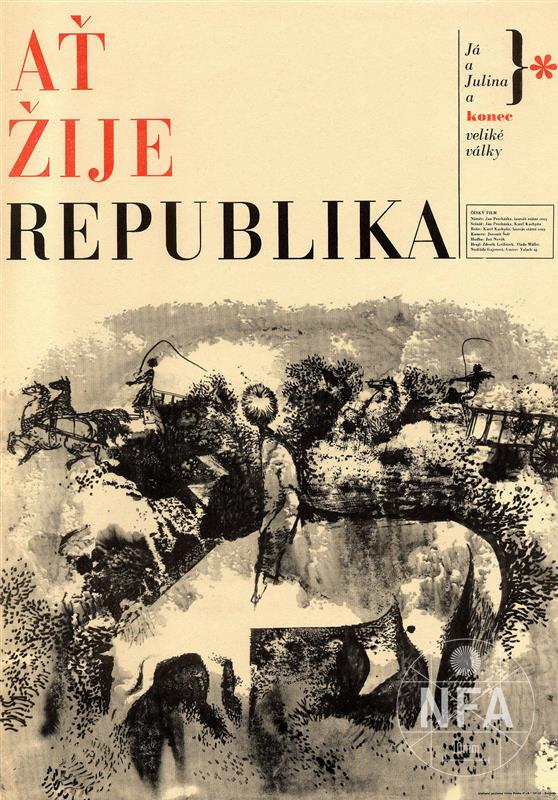