Slovak double act Milan Lasica and Július Satinský star in this sci-fi comedy directed by Oldřich Lipský and released in 1982. These two proponents of sarcastic and absurd humour had previously recorded success in pictures such as children’s comedy Nekonečná – nevystupovat (No Terminal – Don’t Get Off!, 1978) directed by Radim Cvrček. In Srdečný pozdrav ze zeměkoule (Cordially from Earth), with popular comedy maker Lipský in the director’s chair, Lasica and Satinský play extra-terrestrials visiting Earth with the demanding task of researching civilised life on the planet. They assume human exteriors and select a jumpy Dr Jánský (Jiří Menzel) as their earthly host as they consider him to be a typical specimen of an average earthling. Even though the shy scientist is an employee of the Institute for Liaising with Extra-terrestrial Civilisations, the inquisitive and childish antics of the two visitors very quickly begins to take its toll on his already dented inner peace. Jánský finds himself forced to pay for damage caused by the two at the local grocery, while he is soon at odds with his short-tempered neighbour Vaněrka (Luděk Sobota). The alien pair even endangers the scientist’s presentation at a symposium which they infiltrate in disguise. Following their bizarre experiences with ditch excavators and window cleaners, they even experience earthly sex with merry hitchhikers… This tragicomedy with an environmental message offers a classic comedic confrontation between inquisitive visitors and the customs and morals found on earth (topped off by sarcastic observations on life under real socialism). Given the usually expensive visual tricks associated with the genre of science fiction, director Lipský resorted to animations created by draftsman and visual artist Vladimír Jiránek. They were used in the film whenever the visitors from outer space reported back home. Such an arrangement expanded the space available for comic ideas beyond dialogue and live-action. These found their place in animated segments delivered in the spirit of Jiránek’s short films. The scientific congress is visited by a colleague of Satinský and Lasica – Zdeněk Svěrák – who arrives in the role of omnifarious scientist Jára Cimrman.

Two visitors from the outer space land on Earth. They can change the appearance of their vehicle, their own appearance as well as their clothes according to need in order to remain inconspicuous. So their flying saucer looks as a beer keg one moment and a waste container the next. Without ceremony, they move in with doctor Jánský, who was found by the supreme computer of the galaxy as a sample of an average human. The shy scholar Jánský works in the Institute of Contact with Extraterrestrial Civilisations. He tests the samples of artificial food on himself instead of animals out of compassion. The food makes him sick and moreover, his girlfriend Jiřinka gets angry with him. The extraterrestrials A and B begin researching the earthly civilisation in his flat. They break fragile things and switch on the TV and the stove. Jánský, returning home, rings the bell and causes a gas explosion. Slightly injured, he goes to bed. A and B dutifully imitate him but their snoring is unbearable. The two aliens are captivated by food vending machines. They ask people how they would react to the visit of extraterrestrials. They send pieces of information through the TV set. In a self-service shop where their involuntary host sends them for mineral water, they taste food, open bottles and knock over a pyramid of cans. Jánský must pay for the caused damage. The inquisitive visitors from outer space meanwhile dismantle the trabant car of the choleric neighbour Vaněrka. Although they reassemble the minicar, they put the wheels on perpendicular to their original position. The careworn Jánský asks for a vacation but the director refuses and instead asks for a paper for the approaching symposium. A and B explore the phenomenon of work as ditch diggers and window cleaners. The extraterrestrial B infuriates wedding guests when he changes his clothes to copy the bride's admired wedding gown. In a forest reserve where he searches for some peace, Jánský writes his speech on toilet paper. In the meantime, the extraterrestrials are mesmerized by the technical conveniences of artificial nature. A and B also get to know human love when they hitchhike and stop two frolicsome girls. They enjoy a picnic as well as making love in the open air. Jánský delivers his speech on the inappropriate paper shortly before the symposium opening. But his speech is halted by the world-famous experts - professors Nowak and Miller - who ask for Jánský's attention. But they are in fact the extraterrestrials who stole the name tags. Their peculiar hypotheses arouse astonishment among the scientific experts. The real scholars Nowak and Miller, however, appear in the midst of a discussion and the two aliens run away. They broadcast their latest report about science and a favourable prognosis for Earth. They say goodbye to their host but they are ordered to continue in their research shortly before the departure - the Earth is threatened by a catastrophe. A and B thus find another host - the irascible neighbour Vaněrka. 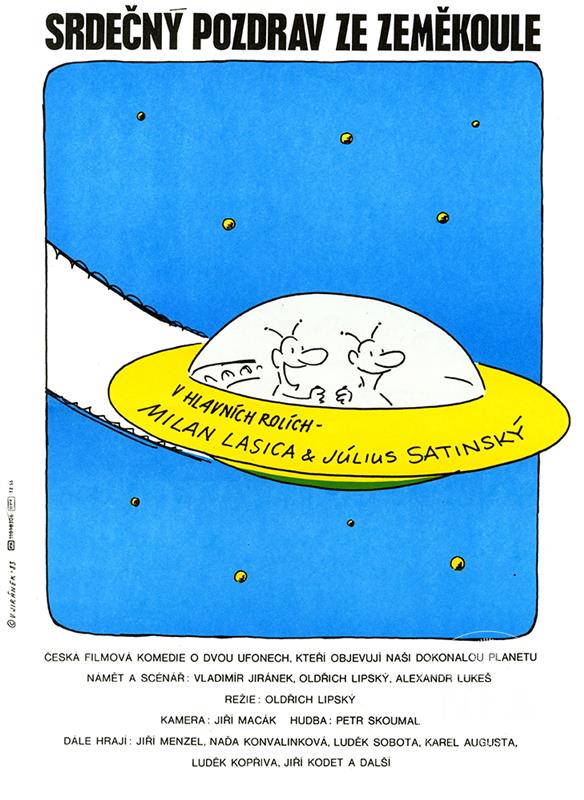 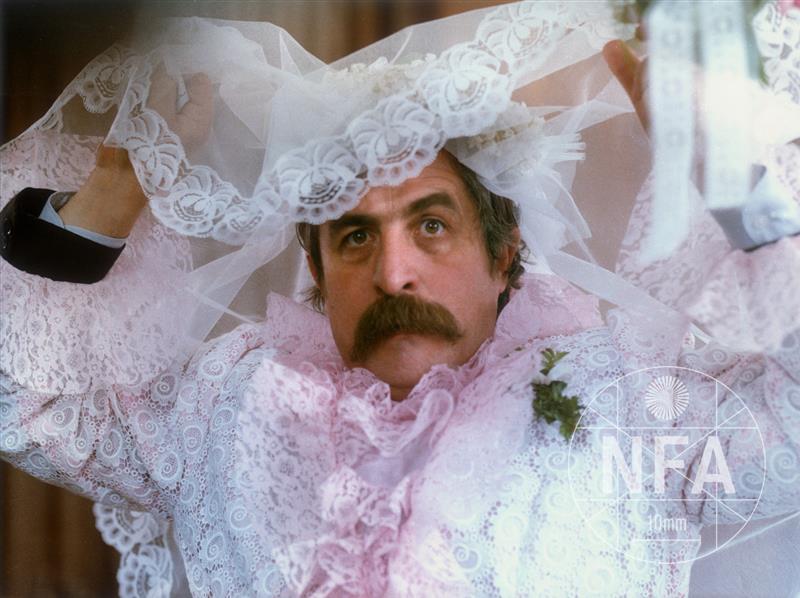 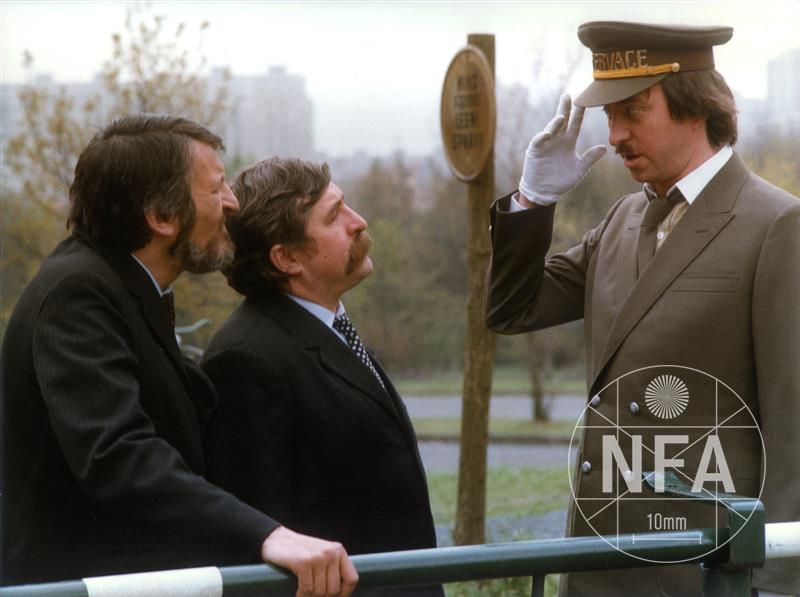 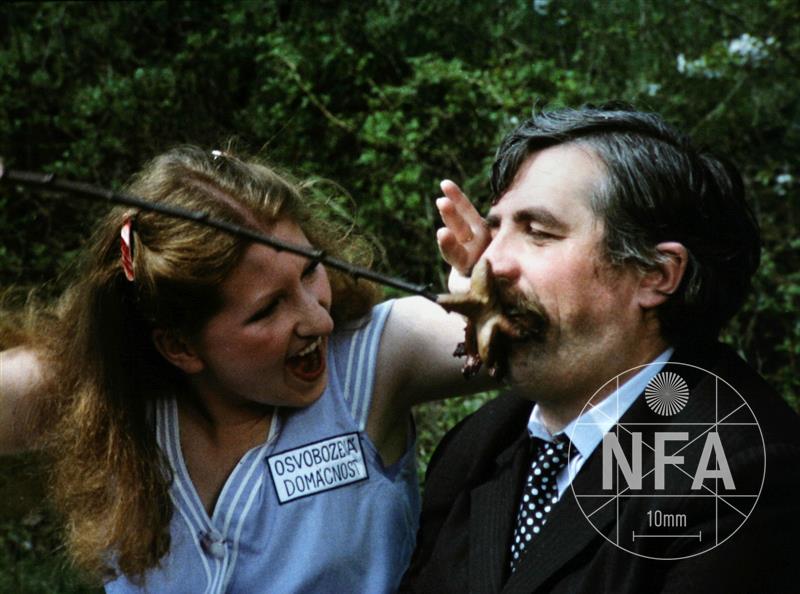