It was German author Gottfried August Bürger’s 1786 literary work that inspired film director Karel Zeman to write the script for Baron Prášil (Baron Műnchhausen) together with poet Josef Kainar, before he turned to directing it. The science-fiction motif (featuring the landing of astronaut Toník on the Moon) of the poetic adventure film is, on the one hand, rather unusual for Zeman, but on the other it becomes diluted in the subsequent avalanche of the baron’s highly imaginative storytelling. The legendary Baron Prášil (gracefully depicted by Miloš Kopecký) takes the “Moon-dweller” on a tour of his world that involves countless romantic adventures, including the encountering of beautiful princess Bianca, played by Jana Brejchová. Zeman and his team drew much of their visual inspiration for Baron Műnchhausen from engravings by French printmaker, illustrator and sculptor Gustave Doré. The film remains popular with audiences not only for the brilliant and imaginative technical skill manifested throughout, but also thanks to a considerable list of popular actors in supporting roles.

On the Moon, cosmonaut Toník meets those who have visited this fellow-traveller of the Earth long before: Cyrano de Bergerac, Baron Münchhausen and Verne's cosmonauts Nicholl, Barbican and Ardan. They all consider Toník, clad in a space suit, to be a native of the Moon. Baron Münchhausen therefore invites him to visit the Earth. The mythical Pegasus carries them to Constantinople, where together they save the beautiful captive, Princess Bianca, and both fall in love with her. In their escape from the Sultan, they must overcome many dangers: jumping from a rock into the sea, fighting with the Dutch against the overwhelming superior forces of the Turkish flotilla, withstanding the innards of a whale which swallows them along with their boat. They are freed by the harpoon of a whale hunter, but the adventure is far from over. They still have to get away from an abandoned island, where Toník unsuccessfully attempts to build a steam boat. Eventually, a Dutch boat takes them to a besieged fortress. Münchhausen flies to the enemy on a cannon ball and acquires valuable information. Toník gets hold of the gun-powder which is to help them fly into outer space. He is arrested for the theft, but Princess Bianca, who loves him, sets him free. Then comes Münchhausen's turn - he throws a lit candle into the well full of gun-powder. The subsequent explosion flings the Baron, seated in an arm-chair, Toník and Bianca to the sky. They all happily get back to the Moon where they are welcomed by Cyrano and the rest of the gentlemen.

The visual side of the film was inspired by the engravings of the French painter and graphic artist Gustav Doré. In the National FIlm Archive unused shots survived in the form of duplicate negative Orwo (black and white, 2626,8 m). 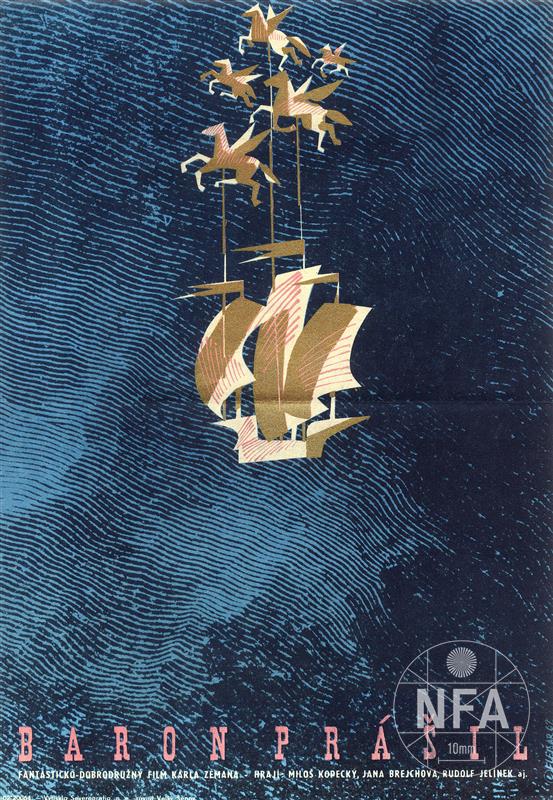