A popular film in director Jiří Menzel’s sequence of adaptations of the stories of Bohumil Hrabal, Slavnosti sněženek (A Feast of Snowdrops, 1983) followed the extract Smrt pana Baltazara (The Death of Mr Baltazar, 1965) – which served as a short film in the anthology title Perličky na dně (Pearls at the Bottom, 1965) – Oscar winner Ostře sledované vlaky (Closely Watched Trains, 1966), Skřivánci na niti (Skylarks on a String, 1969), and the much admired Postřižiny (Cutting It Short, 1980). A collection of Hrabal’s short stories published in 1978 was used to create this tragicomic mosaic depicting the daily lives of several characters in the Central Bohemian town of Kersko, a place to which Hrabal had close ties. Both the seasonal inhabitants of local holiday properties and Kersko natives meet for a pint in the Hájenka pub, whose owner Láďa Novák (Jiří Schmitzer) and his wife enjoy a tumultuous relationship comprised of affection and argument in equal measure. Good-natured Mr. Leli (Jaromír Hanzlík) keeps spending money on useless “bargains” that are gradually filling up his house and garden. Mr Liman (Bořík Procházka) drives his goats to pasture in a luxury car and plays the clarinet to them while they graze. The tranquillity of the hamlet is disturbed by a wild boar hunt which culminates in the animal being shot dead in the local school. The hunt trophy then becomes a point of contention between hunters’ associations from the two neighbouring villages. The rising tensions only dissipate when the schoolteacher (played by Libuše Šafránková) wisely suggests that they organise a joint feast for the two associations. The feast nevertheless ends up in a drunken brawl… As with most of Hrabal’s stories, A Feast of Snowdrops, mixes poetry, absurdity and raw drama, including the death of the hapless Mr Leli. His surreal, needless departure is an isolated dark moment in the pattern of humour, playfulness and generosity that makes up both Hrabal’s literary template and Menzel’s film (the screenplay was a collaborative effort). The cast of A Feast of Snowdrops includes popular actors (Petr Čepek, Rudolf Hrušínský, Josef Somr) and even some popular directors (Jiří Krejčík plays the fat, voracious Karel, while František Vláčil was cast as an old huntsman). Bohumil Hrabal also made a cameo appearance as a local man painstakingly emptying a cesspit.

Recreation cottages are scattered throughout the forest around Kersko village. They are all inhabited in the summer and at weekends, which is proven by their TV screens shining into the darkness. Bicycles wait for the regulars in front of the pub Hájenka. The police captain Vyhnálek sneaks on his neighbours and prevents them from riding home drunk by confiscating their tyre valves. The ensuing walk home reminds Mr Leli of the painting The Blinded Bulgarians Return to Their Homeland. In the morning, Mr Franc rests in an orchard surrounded by ripe apples fallen from the trees. His idyll is frequently interrupted by wasps and his wife's and daughter's tyrannical yelling. A young publican and his wife make love passionately, also quarrelling without a single word being uttered, parting and reconciling again. It can be said that their daughter brings herself up somewhat by herself. The tractor-driver Janeček disturbs a wild boar while harvesting maize. Janeček's helper runs to get the hunting rifle. Franc finally takes his wife, daughter and little grandson for a trip on his tiny tractor. But an adventurous hunt makes him leave them in the tractor on the road and join the gathering gamekeepers. The shot boar runs away from the company, finding shelter in the local school. The children jump up on their desks. Janeček eventually brings the animal down and faints. The gamekeepers, who carry the brave shooter and then also the trophy out, are residents of two villages and begin to fight for the boar. The two camps' dispute is interrupted by a young but resolute woman teacher who recommends a joint feast in Hájenka. Its publican agrees to prepare half of the boar with a rose-hip sauce and the other half with cabbage and dumplings. But only Mrs Francová knows how the feast is going to end. The good-hearted Mr Leli loves to profitably buy defective goods, although most of them are non-serviceable. He acquired his mate, a bearded and irritable hussy, in exchange for the painting A Winter-Clad Landscape. Mr Liman takes his goats to pasture in a luxurious pontiac car and plays clarinet to them. Mr Karel weeds his garden while lying down due to his corpulence. The gamekeepers ask him to smoke the boar salami but are returned only half of it because the edacious Karel lost control over his gluttony again. The planned feast begins in the festooned Hájenka in a grandiose way. It is, however, followed by a fight as always and it eventually ends up with the fight of the drunk gamekeepers. Leli brings his friends his midnight home-made tripe soup on a moped. But he has an accident, nevertheless protecting the soup bowl more anxiously than his head. He is, however, severely injured and dies in spite of the help called for by Liman. The drunken Franc is taken home in a wheelbarrow by his wife and daughter. The funeral assistants load the coffin. Dawn is breaking over the village of Kersko. 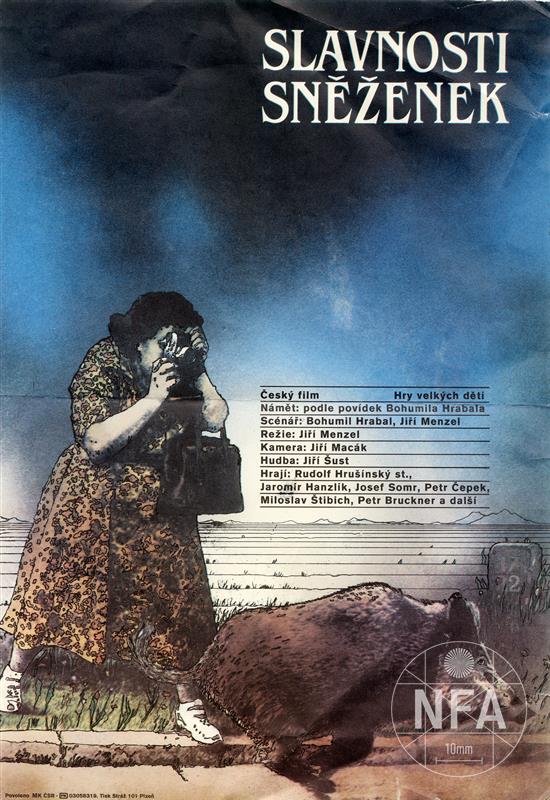 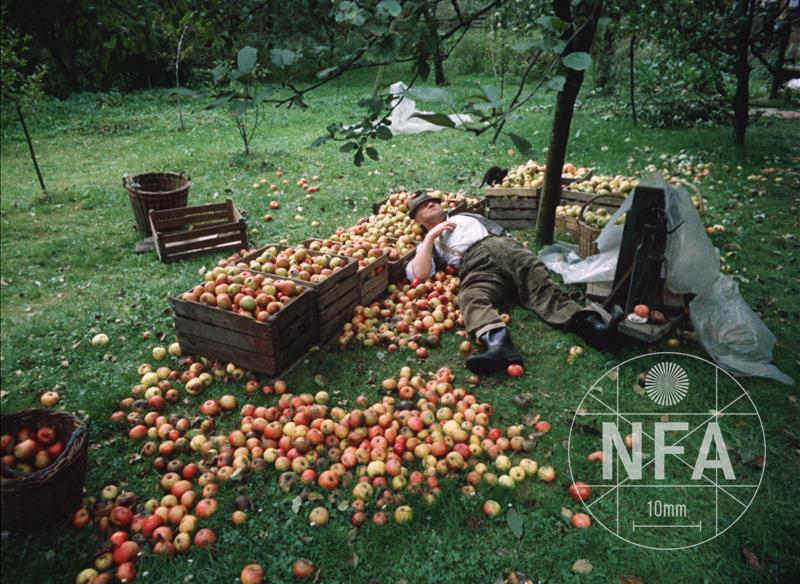 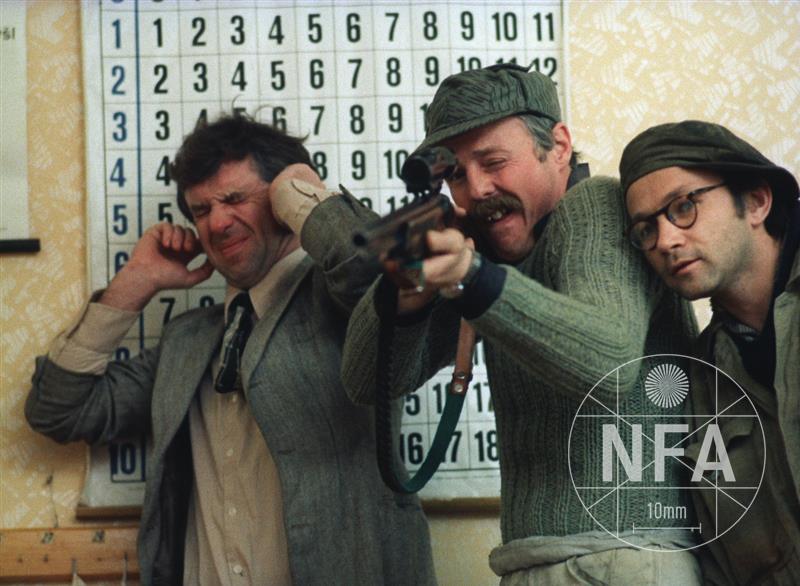 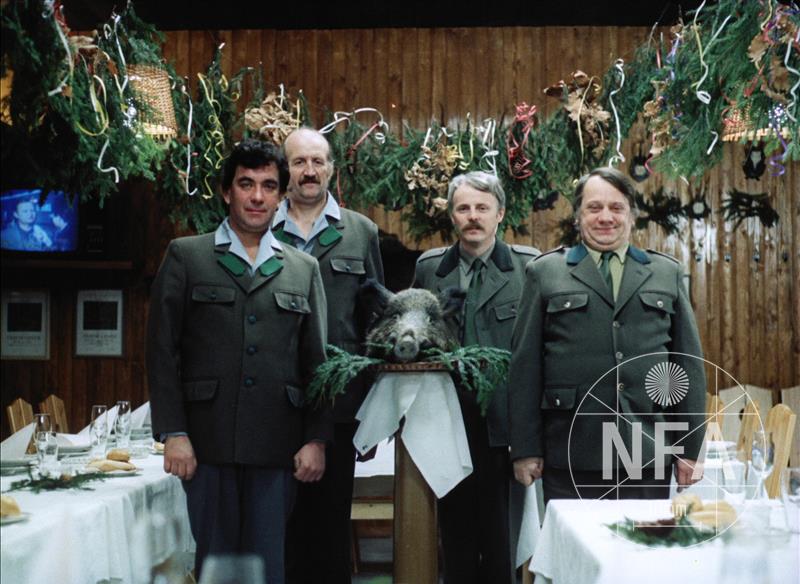