Božena Němcová´s fairytale Čertův švagr (The Devil´s Brother-in-Law) has inspired several film adaptations. As well as two films for television (a 1969 production directed by Věra Jordánová and a 1984 outing by Vlasta Janečková), its storyline was also used to create S čerty nejsou žerty (Don’t Play Around with Devils, 1984), a diabolic comedy directed by Hynek Bočan. The screenplay, written in collaboration with Jiří Just, derives much of its comedy from an appealing depiction of Hell and its fiendishly entertaining inhabitants. The mightiest figure in the underworld is Prince Lucifer XIV. He uses his dark powers to help the young hero of the tale, Petr the miller, find happiness. In doing so, he must vanquish the greedy Dorota, who tries to take over the old mill, and then punish the rapacious governor who has ruined the princedom. He also helps his young protégé to become rich and to obtain the love of Adélka, the beautiful daughter of a local prince… In Bočan’s successful reworking of the fairytale, the devils do not merely serve as agents of darkness or comical fools but also as custodians of justice who help the people stand up against their evil and greedy adversaries. However, the true hero of this merry tale is the young miller Petr, who achieves happiness not only by means of a magical coat producing an endless supply of gold coins, but also because of his bravery and cunning. Don’t Play Around with Devils was a popular fantasy film among children thanks to intelligent humour that did not underestimate its audience. The narrative employs a traditional fairytale morality unhampered by considerations of age, sex, social status or background. Cameraman Jaromír Šofr and composer Jaroslav Uhlíř also made significant contributions to the film’s success. The versatile Vladimír Dlouhý starred as Petr. Karel Heřmánek (Lucifer XIV) and Ondřej Vetchý (Janek) played the devils with obvious zeal. Petr Nárožný also stole a scene as the nettlesome corporal who tries in vain to turn Petr and Janek into soldiers.

The miller Máchal lives in a principality with his family. But then, war breaks out and lasts for ten years. The miller is left a widower and tends to the mill with his son Petr. The reigning prince is suddenly impoverished. What the wars have not consumed was stolen by the greedy administrator or wasted by the pretty but selfish princess Angelika on her dresses. Her sister Adéla is pretty, too, but she is modest and kind. The château cook Dorota wooes the caretaker who advises her to marry the wealthy miller. The aging man gets fooled and indeed marries the greedy Dorota. She then immediately fires all the mill helpers in spite of Petr's protests and moreover forces the worn out miller to dance at a village hop. The man collapses and dies. Dorota even tries to get rid off the heir to the mill, Petr. The administrator gets her a warrant to arrest Petr based on false accusations. The Prince of Darkness, Lucifer XIV, has had enough of Dorota's sins and sends out the devil Black Horse to kidnap her to his kingdom. Dorota protects herself with feathers which the devils fear and also lets Petr's grandmother be kidnapped instead of herself. On his escape from the soldiers, Petr saves the life of the princesses whose horses stampeded. He is arrested and sentenced to military service in no time. The innocent grandmother must meanwhile work off the mistake of the confused devil whom she named Janek (Mulish). Janek returns to the world upon her intercession, but he fails once again. He gets drunk in a pub and a corporal recruits him into the army. Petr and Janek become friends and help each other against the bullying of the evil corporal. The ball where Angelína is to pick up a rich bridegroom does not turn out well and the offended wooers moreover threaten the prince with war. Petr helps Janek get the miller Dorota to hell. The grandmother gets back to earth in return and Petr gains the old coat which can create golden coins by magic. But as soon as the young miller puts the coat on, he acquires a dirty and devilish look. He distributes money to the poor and even the disguised prince comes to get support. Petr, however, recognizes him, promising him the the missing thousands in exchange for the princess's hand. Janek takes both the evil corporal and the sinful administrator to hell. Angelína rejects marrying the tattered Petr. But he saves up some spare money by his magic and takes off the coat which thus loses its magic powers. He then visits the château as a handsome youth. Angelína does not disdain him this time, but Petr prefers to marry Adéla. Angelína becomes the bride of the very Lucifer.

The suggestive scenes from hell were filmed in a cave resulting from mining sandstone which, at the time, served as a potatoe cellar for the Soviet occupation army. The soldiers, however, agreed to the filming and temporarily removed the potatoes.The place was relatively small and the sense of space was achieved by using a wide-angle lens. 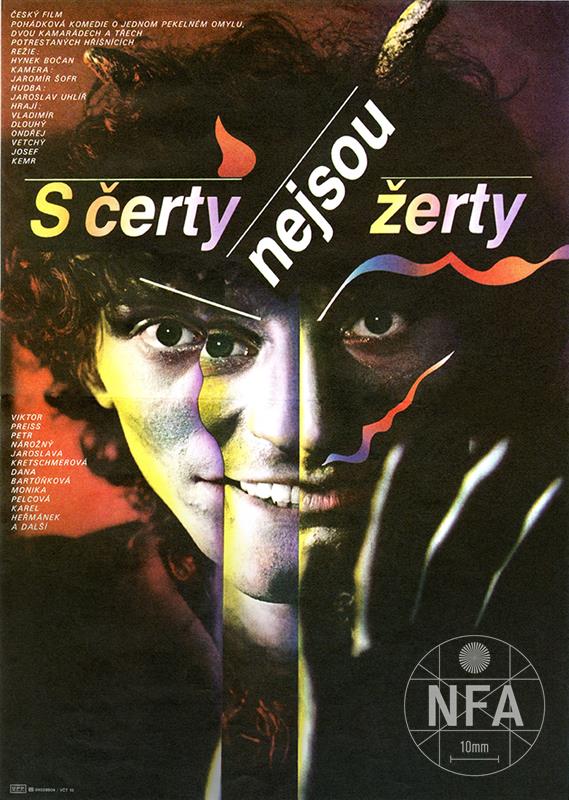 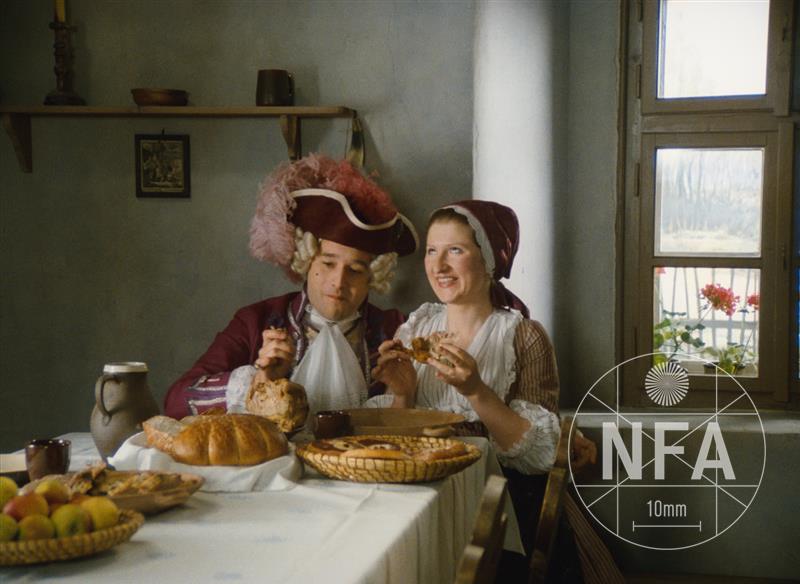 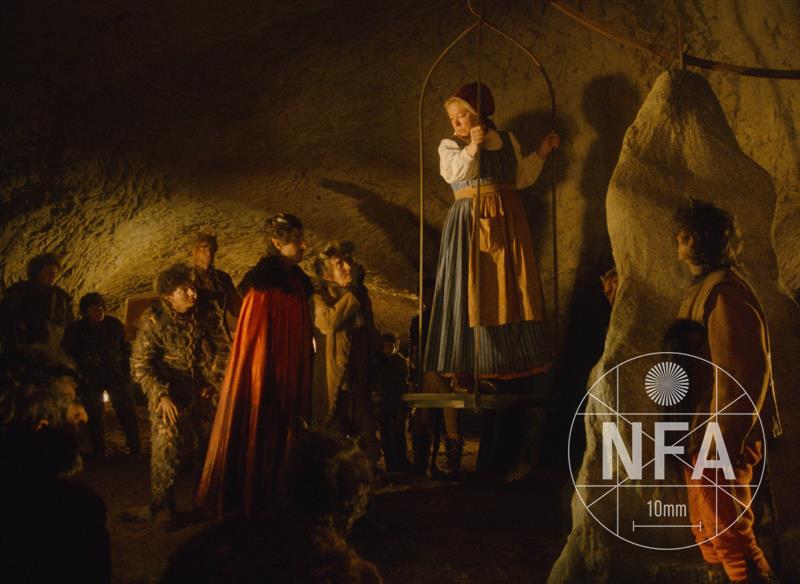 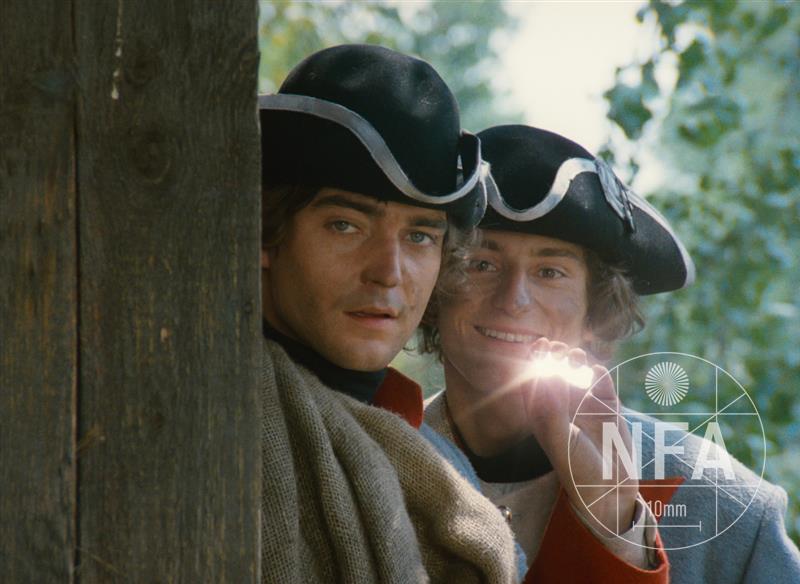 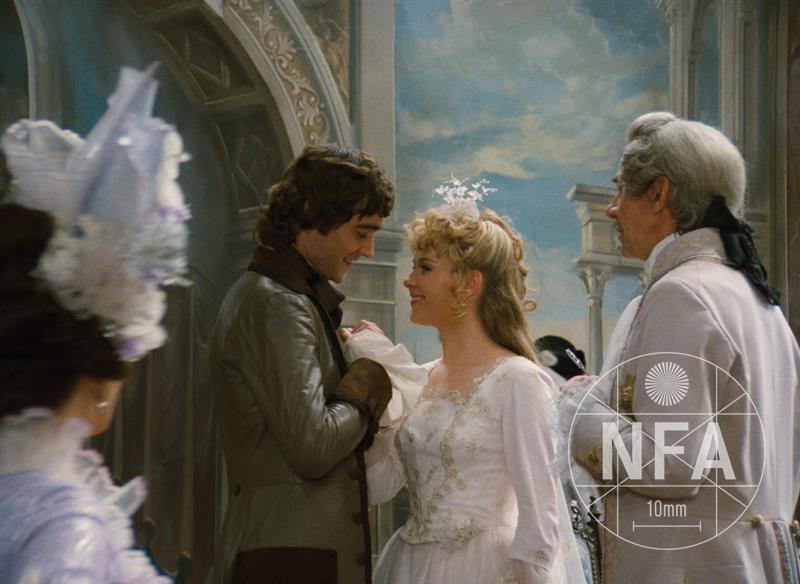