While the most popular fairy tale in Václav Vorlíček’s filmography remains Tři oříšky pro Popelku (Three Nuts for Cinderella, 1973), the successful director also employed his experience of the fantasy genre to good effect in Princ a Večernice (The Prince and the Evening Star) (1978), a fairy tale about the power of familial love, and the romantic tale Jak se budí princezny (Best Way to Waking Up Princesses) (1977), inspired by the classic Sleeping Beauty narrative. The screenplay for the latter was written by Bohumila Zelenková; primarily a TV screenwriter and dramaturge, she was the wife and close collaborator of the better known Otto Zelenka. Zelenková had worked with Vorlíček on Three Nuts for Cinderella, on which she used her name to cover up the authorship of the then banned František Pavlíček... As the heroine is rather inactive when it comes both to selecting a groom and breaking her evil curse, and sleeps for most of the well-known fairy tale, Zelenková amended the plot. In her rendition, the comely princess has a jealous older sister Melánie; fortunately, the curse causes the old maid to soften. While the smug prince Jiří is keen on the princess, she loves his younger brother Jaroslav. When the curse is fulfilled and the princess pricks her finger, Jaroslav has to overcome various adversities in order to awaken his love and the entire kingdom… The lead in the stylish, engaging fairy tale was performed by the then 18-year-old Marie Horáková, who had previously only been seen in small parts. Jaroslav was played by Jan Hrušínský, who had already proven the ideal beau in Vorlíček’s Dívce na koštěti (The Girl on The Broom, 1971). Jan Kraus, popular for his portrayals of hooligans, also appeared in that picture and here played prince Jiří. Jaroslav’s valet Matěj, played by Vladimír Menšík, became a popular character in the movie.

The king Dalimil and the queen Eliška waited to see a longed-for offspring - a daughter Růženka. But Eliška's envious and bad sister Melánie curses her. When Růženka becomes 17 years old she will prick her finger and she will fall asleep for ages together with the entire kingdom. Only the old maid makes the curse milder when she reminds to the heart-broken parents that love is stronger than death. The king had better removed all plants with thorns. Růženka became beautiful. Jiří, the crown prince of the Midnight kingdom came together with his parents and his younger brother Jaroslav to woo her. The self-sufficient young man is taught by his parents how to be self-confident as a future king rather in a bad way. They let him win games and competitions and they keep back that the bear with which he likes to fight successfully is the servant Matěj disguised as a bear. But Růženka falls in love at first sight to Jaroslav. In a horse race Jaroslav better falls into the pond in order not to run over a child. Also Jaroslav loves the princess and still he leaves the kingdom before the engagement party. He believes to his brother's lie that Růženka wishes so. The following day Růženka will refuse Jiří in front of all guests because she does not love him. Melánie lures on Růženka and the girl pricks her on a rose thorn. The princess and the kingdom fall asleep. Gardener Jakub calls in Jaroslav to help. The prince overcomes the obstacles and learns many things before he hews his way through the thorns to the princess. Then his affectionate kiss awakes her and the entire kingdom. 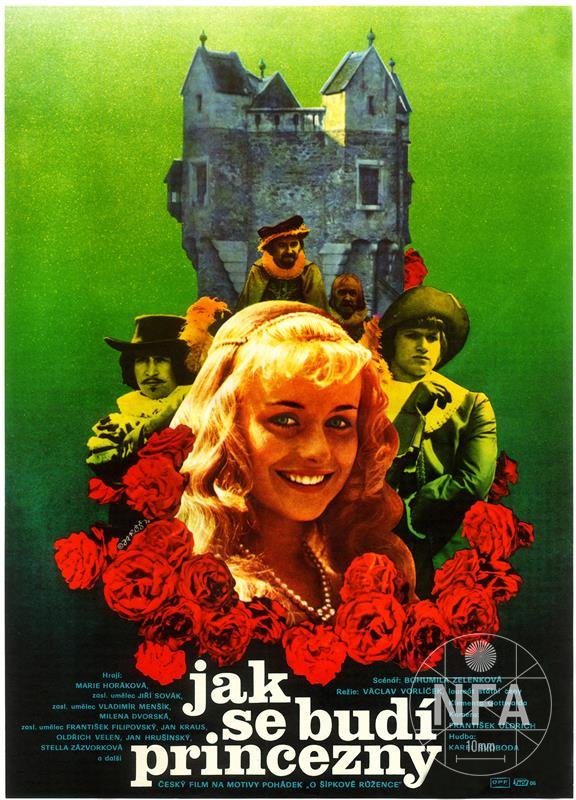