A grandfather with magic powers drives the action of Já už budu hodný, dědečku! (I’ll Be Good, Old Man!, 1978), a modern fairytale by screenwriter and director Petr Schulhoff. Popular actor Ladislav Pešek plays the grandfather and the fairytale is little more than a device for meting out well-deserved retribution on Theodor Bergner, a pompous and intolerant actor from Prague. Although Bergner is successful and presents himself as a model of human courtesy, he insults everyone around him with gusto (especially women) and deliberately arouses altercations. After the magical grandfather intervenes, however, the wrongdoings that Bergner has committed in the past begin to haunt him – assisted by the reappearance of characters he has previously hurt. Humiliated and defeated the actor finally promises to behave himself... Besides Ladislav Pešek the other starring role in this comedy of morals was played by Miloš Kopecký. The parts of the offended women went to Dagmar Veškrnová, Nelly Gajerová and Alena Vránová.

To the intolerant and bloody-minded Prague actor Bergner is the lead in Moliere's Misanthrope which he is studying now as tailor-made. On top of that he is malicious and he advises to the new actress Helenka in such a way that she upsets the theatre director. If Bergner accuses somebody of a mischief and he is wrong, he never apologizes. When he almost crashes an older elegant lady by his car on the zebra crossing, instead of an apology he calls her an old ballet dancer... But in Brno's TV he takes part in a discussion on manners and he gives himself as an example of good manners and grace. In the train he meets a magic old man who warns him and admonishes him to change his behaviour. After he arrives to Prague the old man's threat comes true. A jealous neighbour of his lover beats him up by mistake. His wife's aunt came for the first time from abroad to visit them and she brought him a longed-for tape-recorder. But she takes the tape-recorder again when she sees that Bergner is the mucker who almost run her over. Bergner is attacked by troubles always related to people which he hurt before. Then he wakes up in the train - everything was just a dream... At home his wife blindfolds him and she takes him to the room where he shall wait for a present to his name day and she leaves to the kitchen. Bergner doesn't know that the room is full of his colleagues from theatre and he shifts to his pyjamas in front of the astonished congratulants. In the end everybody covers the flub by laughter. The laughing Bergner is shouting to the street: I will be good, old man! 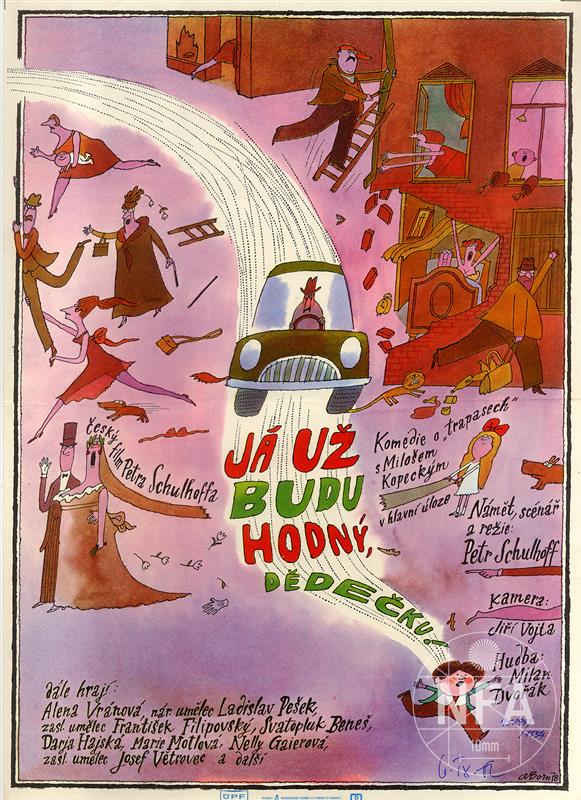