In 1964 Prague’s Semafor theatre was such a safe bet that Barrandov’s investment in an expensive musical loosely inspired by a stage play that premiered in 1958 at Divadlo Na zábradlí (Theatre on the Balustrade) paid off. Kdyby tisíc klarinetů (If a Thousand Clarinets) was written by Jiří Suchý and Ivan Vyskočil (it did not premiere at Semafor itself until 1980). The film’s songs were more recent than the play and represented a cross-section of Semafor hits penned by Suchý and Jiří Šlitr, arranged here for a large orchestra. The song and dance numbers are linked to a simple anti-war story about a military garrison where weapons mysteriously turn into musical instruments. While army chiefs try to deal with the mess, even resorting to dirty tricks, the soldiers happily throw themselves into rehearsing for a musical extravaganza that it is decided will be broadcast live on television. A TV crew led by the beautiful director Tereza (Jana Brejchová) thus arrives at the base. Many star musicians and actors of the period appear in the film, which openly places itself in the tradition of Hollywood-style musical shows. Some of the cast more or less play themselves (Karel Gott, Hana Hegerová), while others take the roles of soldiers (including Suchý and Šlitr and Waldemar Matuška). The screenplay was written by Suchý and Ján Roháč, who shared directing duties with Vladimír Svitáček. Actors, singers and musicians from Semafor (e.g., Gott, Eva Pilarová, Matuška…) appear in the film, as does a girl’s choir in which fledgling young actresses and singers (from the Divadlo Paravan and Magic Lantern theatres) can be spotted. The grandly conceived dance numbers were performed by the ballet company from the Karlín Musical Theatre and the Alhambra cabaret troupe. Popular actors such as Vlastimil Brodský and Martin Růžek complement the elaborate cast. The then little-known Jiří Menzel has a cameo as the deserter Schulz, who is responsible for the whole situation.

Conscript Schulze escapes the drill in a military zone near the Alkalis spa and finds asylum with a young teacher. A celebration is underway at the spa to mark the unveiling of a monument to the music composer Johann Sebastian Bach. The television crew of Televis, a private TV station, is on the spot. The young director Tereza must prepare a report. An army unit traps Schulze, who has been forced to flee from the school, just before he reaches a nearby forest. As they are about to shoot him, all the guns turn into musical instruments in the hands of his pursuers. The monument is unveiled before the scheduled time because of pupil Vágner and the reportage becomes pointless. Tereza makes the most of the situation and decides to broadcast the far more sensational news about the transformed guns. Joined by the singers Edita and Benjamin, and her crew, she heads for the barracks. Her report immediately increases the Televis ratings and raises interest in its advertising time. Edita, Tereza and other members of the TV crew stay overnight in the barracks. In the morning, the television owner instructs Tereza to produce a musical revue to be broadcast the same evening. Pressed for time, the eager soldiers, now musicians, rehearse the programme with the hastily assembled dancers. A group of officers makes a furtive attempt to halt the entire action. The enthusiasm of all those participating triumphs over their tricks, and the programme is broadcast. A special commando then finds Schulze, and the clarinet that the deserter holds in his hands for protection turns into a gun again. All other musical instruments at the barracks once again become guns. 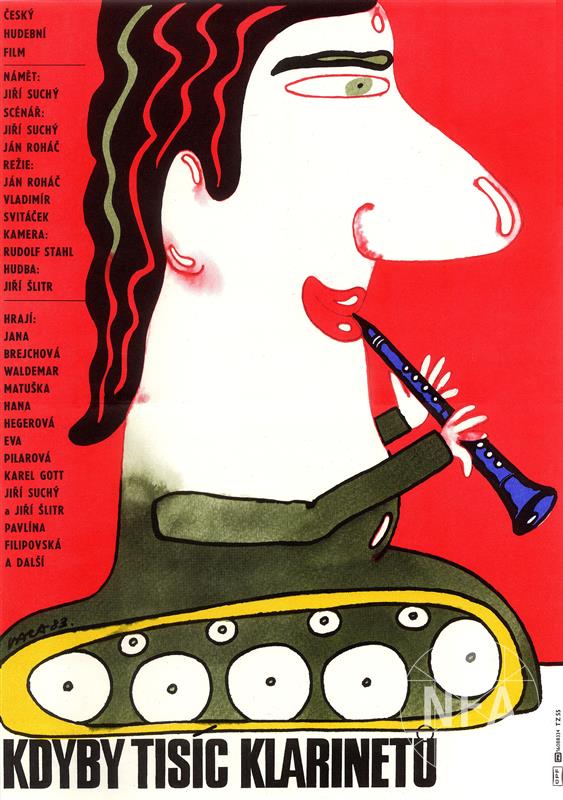